A Week Without Instagram: Travel Photography the Old Way

To someone who shoots pictures while traveling, a week without a mobile phone cam, Instagram or Photoshop is like crossing the River Styxx. I admit to a certain amount of dependence on Photoshop’s “content aware tool,” which can magically erase power poles and tourists in paisley pants. And as much as I gripe about a feature called HDR (high dynamic range), which can turn normal landscapes into surreal scenes from Lord of the Rings, I still sometimes use it when my Mother Nature doesn’t oblige with the right light.

Will I survive five days without these digital wonders? Just me and my camera?

THE PLACE
I am at the Maine Media Workshops in Rockport for a Master Class with Joe Baraban, a Jedi Knight of photography who is schooled in the ancient ways. There was a time when a photographer made sure that everything was right before he or she clicked the shutter release, when what you shot was what you got.

There are two major ongoing photography workshops in the US, the Santa Fe Photography Workshops in New Mexico and the one I chose in Maine. That is only because I had never been to Maine. Both offer beginners workshops and master classes from some of the world’s best photographers.

Rockport, Maine speaks quaint with a tiny harbor that is always crawling with photographers and video makers. The locals don’t seem to mind. Maine Media Workshops is best known for its photo workshops but also teaches a wide range of subjects including computer animation, film making and book design. Returning to campus late at night you might see a parking lot lit up with giant movie lights.

Baraban is an A-list advertising shooter turned teacher. Look him up online and you may recognize some classic magazine ads. I signed up for his advanced workshop called “Stretching Your Frame of Mind.”  As a guy who has shot every travel photo cliché in the book, I felt I the need for new eyes. Gear-wise, I am traveling light with one camera and one lens. More often than not, people show up at these workshops festooned with cameras, gizmos and lenses that look like elephant guns. Photo equipment marketers long ago nailed the mindset of people who think that that next new shiny piece of gear will be their tipping point to master photographer (I once took a gardening class and found out that gardeners collect fertilizers for the same reason).

Baraban believes that simple is best.  He looked at my camera, a Panasonic GH2.  “Too many buttons,” he said. 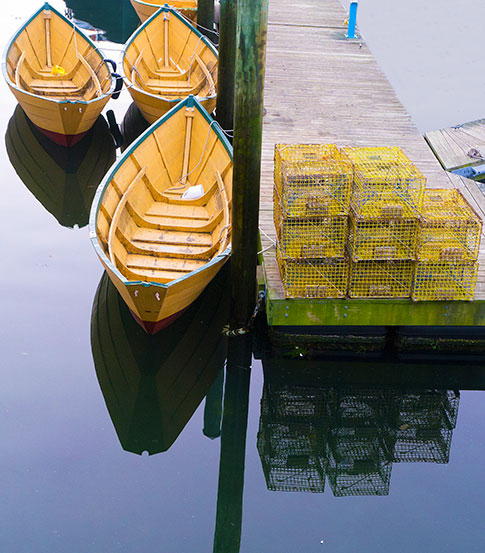 THE RULES
Joe sets out the rules at our first meeting: We are to shoot before breakfast and in the evening during what photographers call “golden hour” when the sun bathes the coast of Maine in warm glow. Five shots a day for critique.

And, quelle horreur, no Photoshop, not even cropping!

As a filmmaker who once used real film and spent thousands of dollars in stock for even a short project, I learned the discipline of carefully setting up shots before I pushed the button.

How lazy I have become in this digital age. Shoot away, fix it later.

Although I usually use a tripod for video, I rarely use one for still photography. With a fast lens, sensitive camera and a jiggle reduction switch, I don’t need it anymore. Or do I?  Joe says that aside from keep a camera steady, using a tripod disciplines you to analyze every point of a scene, to make sure that UFOs don’t appear and palm trees don’t sprout from heads. Joe, who was originally a painter, says that painting is about adding to a canvas while photography is about subtracting, making sure that what remains is important and well-placed and that there are no distractions.

TUESDAY
We are learning how to scout a location before we shoot using web sites and smart phone apps to determine the angle of the sun at any particular time so we can estimate when and where it will rise and where shadows will fall. Good photographers plan ahead, before the magic moment the photo is taken. Some of Baraban’s advertising shoots, in places like the Sahara Desert, required elaborate scouting, the hiring of crews and camels and precision timing as the window of best light sometimes only lasts a few minutes. “Follow the light” is his motto. Miss it, get something wrong, and you might have to return the next day. On a big advertising shoot, that means big bucks. Of course, now you can buy an exotic background from a stock photo web site, paste in a few beasts from the digital camel lot and add virtual lights. But it is not the real thing, when that aha moment send chills down your spine.

I am staying on campus in an austere room, which is only marginally comfortable. There are better accommodations off campus but being able to walk to breakfast, lunch and dinner and to your classes does have advantages. Dining on campus is a must. There is a camaraderie among students and faculty dining together that I think is almost as valuable as the classes.  The meals are quite good and this week, to celebrate the local catch, we are being treated to feast of lobster on the final night.

WEDNESDAY: DAY OF THE DREAD
The alarm rings at three. Haven’t slept very much, mostly because I was anticipating the alarm going off at three. We gather in a parking lot. Our mission is to drive out to a lighthouse and light that lighthouse. When the glow of the sunrise illuminates the landscape, we will paint the lighthouse and an Old Salt out of central casting standing next it with fake sunshine supplied by a couple of  battery-operated xenon lights.

But it is pouring rain. Our perfect storm? Back to bed?

Joe checks the weather map on his iPhone.

We pile into three vans and drive for 40 minutes, finally arriving at our destination in a pounding rain.

“Well, let’s at least get a look at the place,” says Joe.

I reach in the back of the van and pull out a small plastic bag containing a rain slicker I had purchased in China from one of those street vendors who always appear when it starts to rain. I unzip it. Eeeuw.  It lets out a smell of plastic and something reminiscent of spoiled fish. I shake it vigorously and reluctantly put it on.

We walk toward the lighthouse. An intern from the school shoots a group photo and we scamper back to our vans and wait. One group gives up and leaves. 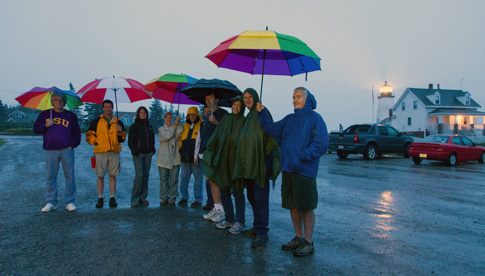 But Joe is game to do something. We gather our gear and walk back to the lighthouse. The rain has lightened up a bit. We pose our Old Salt and shine a light on his face while we take turns shooting and holding umbrellas. It isn’t the pretty, golden light we came here for, but it makes our Old Salt look even saltier.

FRIDAY: DAY OF RECKONING
It is Friday morning, the day of the lobster feast and the big show in the barn where all of the classes make their final presentations. The show can be highly competitive, each group showing its best stuff.

We huddle to make our choices.

“You know your lighthouse shot?  Pretty good, but there’s no light in the lighthouse. How good are you with Photoshop?,”  he asks. 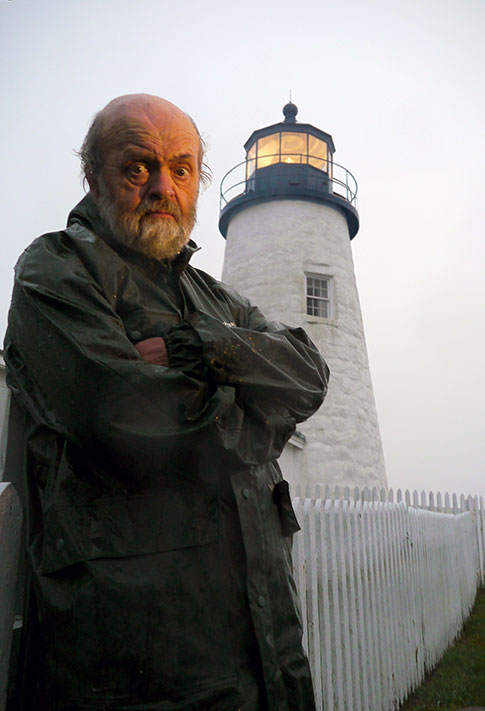 Meal plan $255  (the food is very good).
On campus lodging, including the meal plan:
Single: $940
Couple (queen-sized bed): $1280
There are more deluxe accommodations available off campus.

Maine Media Workshops also has a supurb gallery and bookstore above the Rockport harbor.