Venice, California: The Other Disneyland 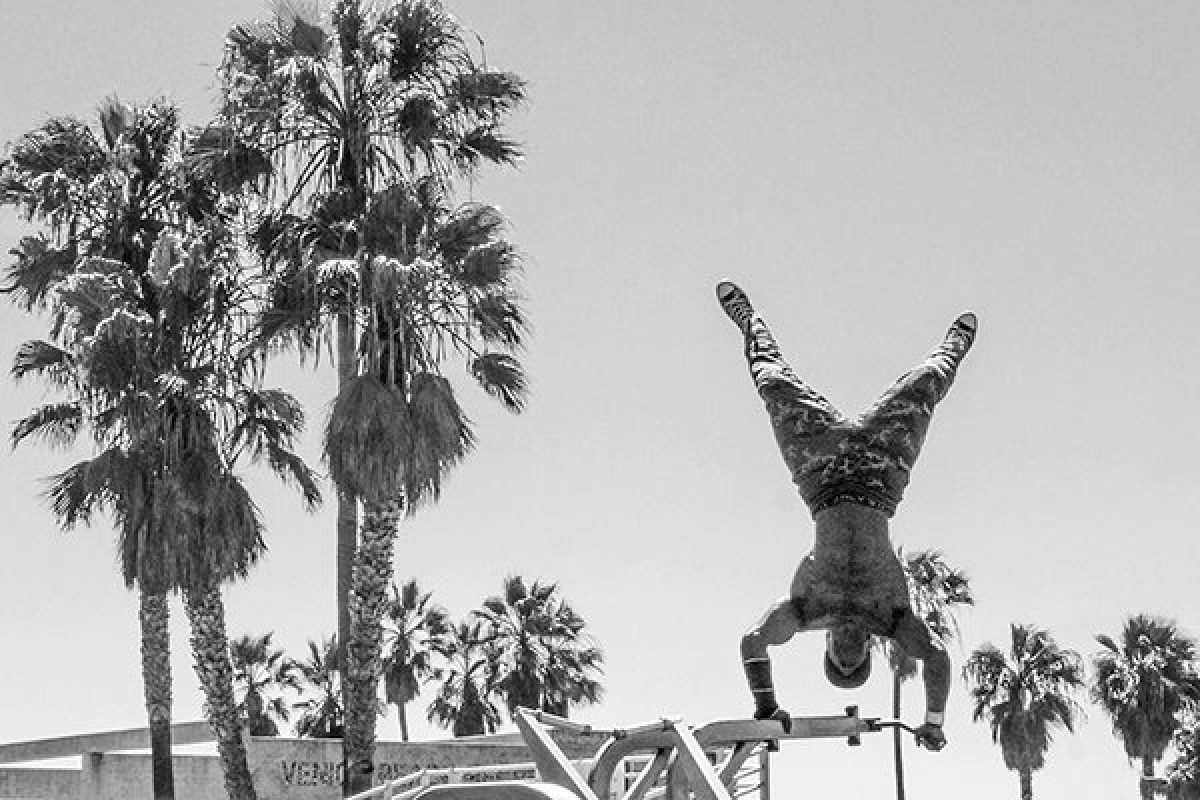 OK, it doesn’t have a white-gloved falsetto mouse in a diaper and it is not as antiseptically acceptable but Venice Beach, in Los Angeles, does have adventures and cartoon-like characters that rival those of Disneyland…unless you are a six year old.

And it is free.

I took the walk along the beach from Santa Monica to Venice last weekend. The view and experience has drastically changed from the last time I did that some 25 years ago. Mostly for the better.

In 80s and 90s, the night air was often punctured by volleys of gunshots between street gangs, the Shoreline Crips and the V-13. Since the 50s Venice had been nicknamed “Slum by the Sea.” But by the early 2000s, yuppies began to move in and stake claims and the gangs have mostly moved on. Now $1 million will buy you a 900 sq ft. fixer-upper.

Venice’s heyday began in 1905 when Abbot Kinney, who got rich in the tobacco business, dug miles of canals and drained marshes to create his own version of Venice, Italy. In 1914, Charlie Chaplin shot his first Little Tramp film here, playing an annoying little man who photobombed a camera crew shooting a go-cart race.

In its heyday, gondoliers poled through the canals and small planes circled in the skies doing stunts for tourists. Venice had a pier with three roller coasters, a fun house and an aerial ride.

But by 1929, a humorless City of Los Angeles had annexed Venice and laid it upon the altar of the motorcar god, paving over many of its canals with streets to make it more LA-like. Then came the Great Depression. The thrill was gone.

About the only fortunate consequence of a place going to seed is that artistic types can afford to live there and sometimes create a vibrant, culturally dangerous community. Venice embraced the beat era of the 50s and 60s and became home to artists, musicians, poets and writers. Charles and Ray Eames designed their chairs. Jim Morrison and Ray Manzarek rocked out with The Doors in 1965. 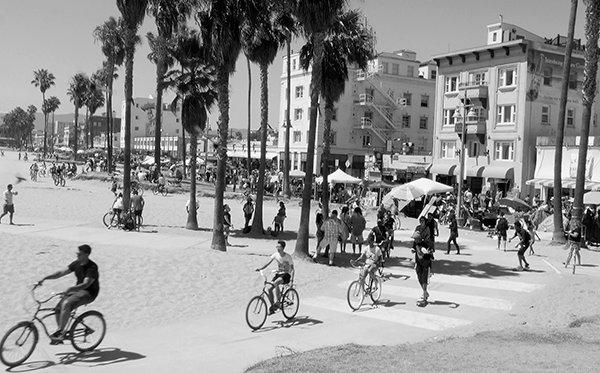 So all of this, the art, the music, the sleaze, the carny atmosphere, the few remaining canals, is now part of the mosaic of the new Venice. Now Venice is bordered on the ocean side by swirling bike paths and walks. LA did penance in 2010 when it restored its beaches with 30,000 cubic yards of sand, replacing what had been washed away by years of storms. 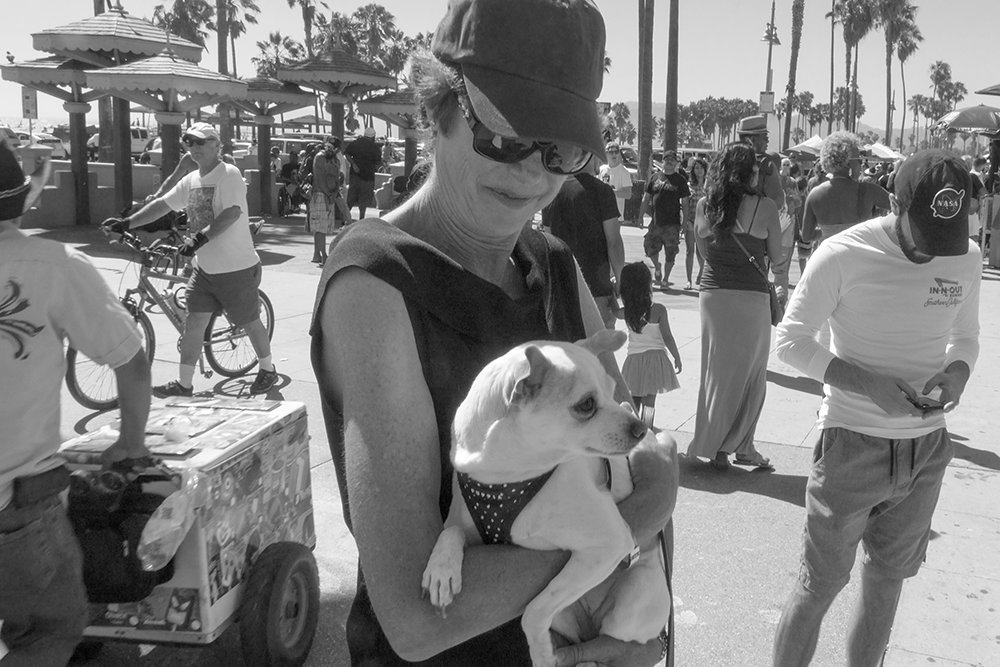 No, it is not Disneyland, but it is clean, accessible and, unlike the Mouse-KIngdom, charmingly unpredictable.

I walk past games of “Ultimate” beach dodgeball, the total mayhem of teams pummelling each other with a half dozen bright colored balls and stumbling in the sand. I walk past a new skateboard park where skaters execute their Ollies. The famed muscle beach is still there, with a few men and women with lobster-like torsos doing handstands on parallel bars and lifting weights, but it is now part of an athletic center, where greased-down hunks pass out business cards and pose for selfies.

The fun, however, is walking the Venice Boardwalk, directly in front of the old town. Past the henna tattoo artists, the storefronts flogging medical mariujana permits, the saxophone player offering a bluesy riff, the man with the balloon hat, the church lady selling rosary beads, the “Ask a Satanist” booth. 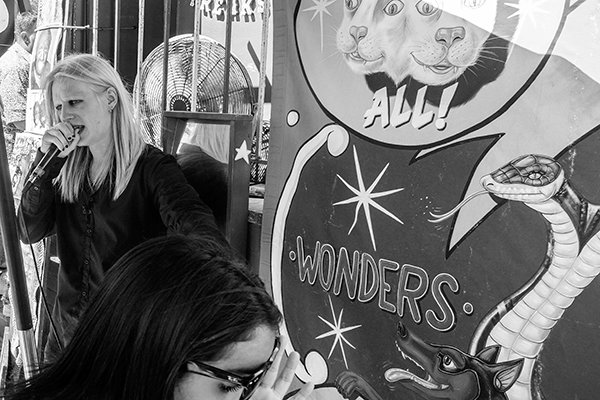 “Come on inside, only five bucks!” shouts the man who looks like a cross between Edgar Winter and Alice Cooper. He stands in front of a poster of a two headed cat. “Its the last freak show in the world. Come take a free look! In front of me in the bucket, a turtle, six extra legs getting some sun, two heads. Come on over, its free! Just a sample of what you will see inside. See the bearded lady and Larry Gomez, the wolf boy. Only five bucks.”

A little boy walks over the the bucket, clutching his mother’s hand.

“Mom, can we go to Disneyland now?”