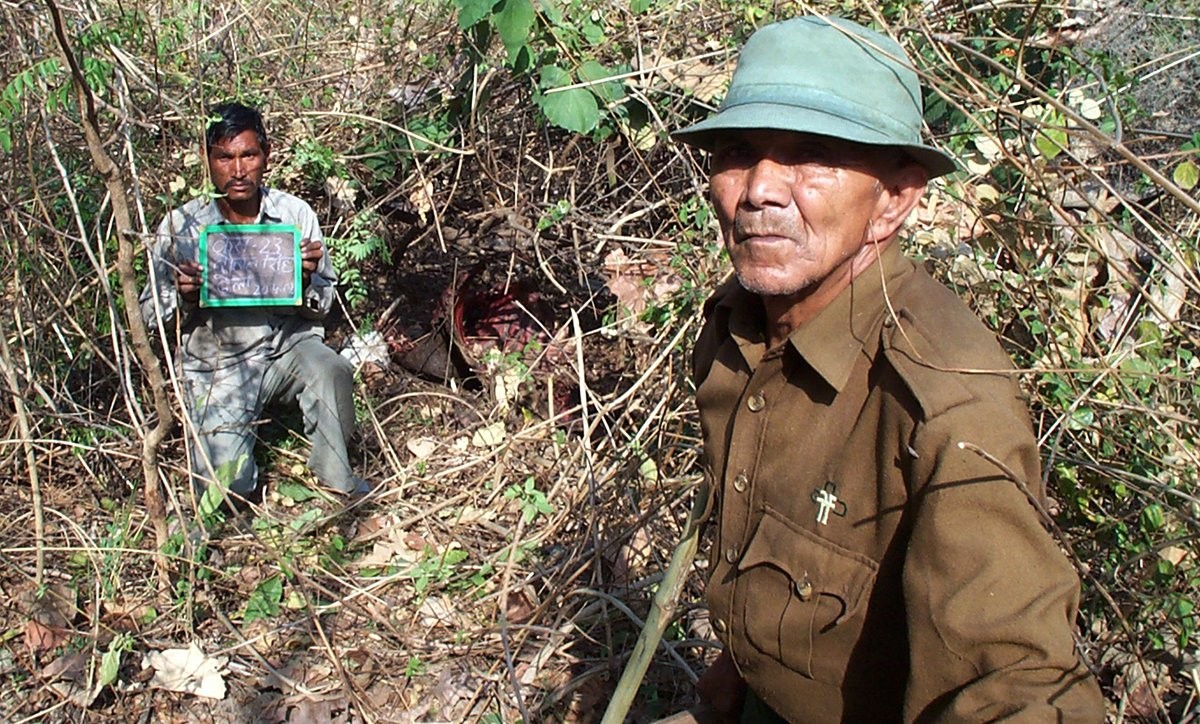 “What’s is it?” I asked Mandip, pointing into the jungle brush. “No big deal, just an LBJ,” he replied.

“Little Brown Job, a bird of no significance to a twitcher.”

I would make a dreadful birdwatcher. I am not by nature a twitcher, someone who compiles lists of bird sightings like John Wayne carved notches on the handle of his Winchester. I organize my life with Post-Its, which blow around my office like autumn leaves. Also, most birds are small and fast, too quick for the lumbering mammal that is me. But India’s Corbett Tiger Reserve is a prime place for birders with some 580 brands including Himalayan Kingfishers, Great Hornbills, and Blue-bearded Bee-eaters. So the birders head off in one jeep, in search of the Hair-crested Drongo while the rest of us Jim Corbett wannabees mount an elephant and a Landrover to search for fresh scat and pawprints, signs of the Royal Bengal Tiger.

Jim Corbett was the quintessential Great White Hunter of the Raj, whose mission, in the early part of last century, was to gun down 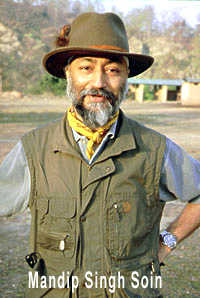 man-eating tigers. He mellowed, however, to naturalist, author and photographer and helped create the game preserve that took his name. Jim Corbett National Park, formed in 1936, was India’s first nature sanctuary. Long before that, in the mid 1700s, Amrita Devi put her arms around a tree here, to save it from the axe and in the process was axed herself. In one day, it is said, 350 people sacrificed their lives for trees. Chipko (to embrace), the tree-hugging movement was born. In certain sects in those days, women managed forests as communal resources and understood the importance of their ecosystems. Today that simple, logical notion would be considered radical and require further study.

I am here on an informal field trip with members of the Pacific Asia Travel Association’s Committee on Sustainable Tourism, of which I am vice chairperson, led by explorer, conservationist and punster of the Punjab Mandip Singh Soin FRGS (Fellow of the Royal Geographic Society and Explorers Club honoree) and his wife Anita, who shares his visions and his adventures. Mandip is Managing Director of Ibex Expeditions, recently honored as India’s most eco-friendly tourism organization.

There were no tigers to be seen the first day out. Fresh tracks and scat, however, and some newly gouged trees. I would imagine that a Royal Bengal Tiger could waste the sofa our two housecats have been working on for a year in single morning stretch-and-scratch.

There are some 137 tigers here in Corbett at recent count, though they won’t jump out in front of you and meringue (leopards diving from trees are a bigger danger). Keeping tigers away from livestock and children or poachers and vengeful villagers away from tigers involves some tricky diplomacy by such organizations such as the Corbett Foundation. We visited a village, which was celebrating the completion of its new solar electric fence. It takes a lot more than a squirt from a garden hose to chase off tigers and wild elephants, which also wander out of the park into the neighboring crops and schoolyards.

We accompanied a World Wildlife Fund jeep to a fresh tiger kill just outside of a village. The Corbett Foundation and the Indian Government inaugurated a program in 1995 that pays cash on the spot for dead cattle so village vigilantes don’t hunt down the cats. Our trek was accompanied by a retired soldier with a shotgun. Tigers can get testy if they are interrupted at dinner. Last winter a big cat charged a group of reporters covering an elephant kill. I stuck very close to the guy with the gun, taking care not to absent-mindedly wander off to take pictures as I usually do.

First we spotted tracks. One of our group noticed that there were two sets, one small, indicating a mother and cub. We didn’t have to hike far. Behind a thicket was the carcass of a cow, picked to the bone like a Martha Stewart turkey. The tiger had finished and was probably off licking a creme brulee. A Foundation staffer wrote a number on a chalkboard, placed in the hands of the cow’s bereaved owner, and photographed him and the carcass before peeling off a handful of rupees to compensate for the loss. Our group chipped in some extra cash.

It was the dry season, in April, before the summer monsoon, which this year has caused disastrous flooding in the region. Next time I visit here I will go in autumn when the land is green and lush. These Himalayan foothills, festooned with farms, terraces and villages, are remindful of Bali, but on a much grander scale. In April, it is dusty and visibility is poor, but in the fall, after the rain has cleared the air, the the world’s tallest mountains remind you how tiny you are. You can stand in the tropical jungle amongst the mango trees and see snow capped peaks of the Himalaya. 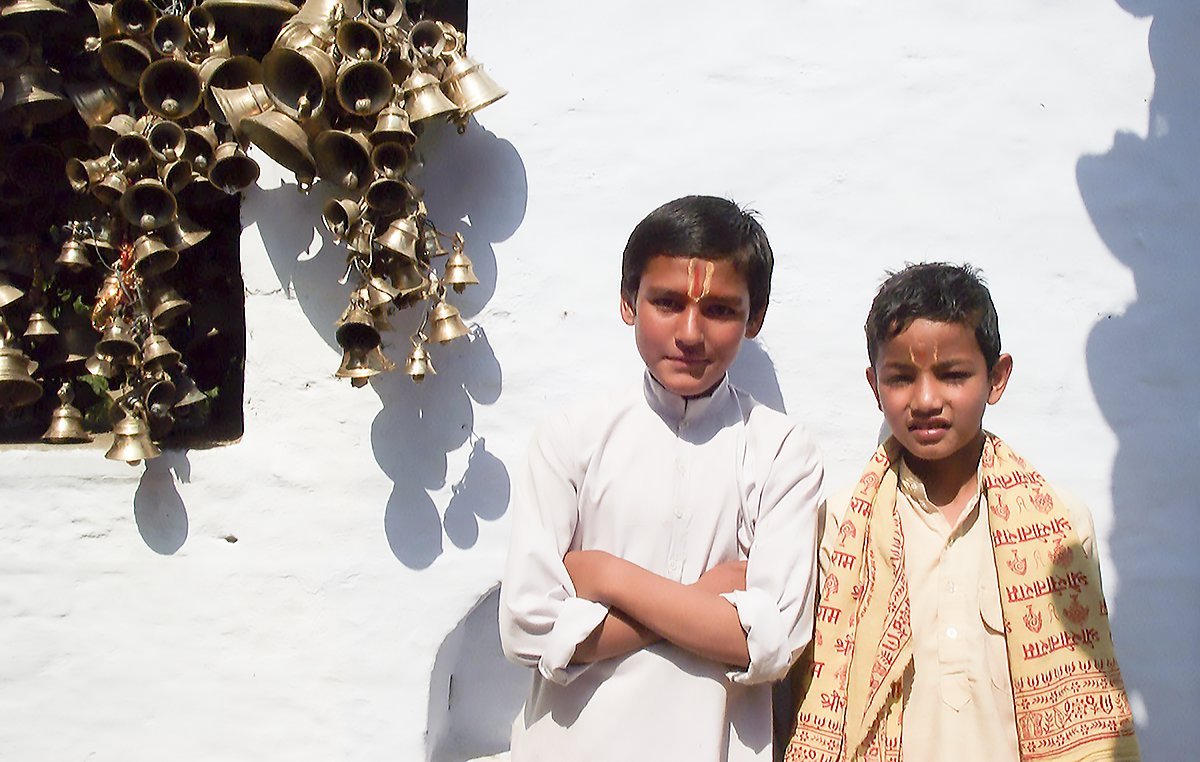 Higher, in Ranikhet near the borders of Tibet and Nepal, where Mandip and Anita have a chalet they call Edelweiss, Bali turns to Switzerland, A Switzerland with cuisine: curries, chutnies, hot chillies and cool cucumber.

Alas, while the bird watchers – friends from Sri Lanka – twitched their Drongos, Bee-eaters and checked off their LBJs to great satisfaction, I did not see a single tiger. In five trips into the jungles of Nepal and India, I have yet to see a cat of any kind or hear a rumbling purr. But I know they are there.* And I will return as I love these jungles and their wild beauty, the sounds of their silence and the knowledge that something is probably out there…watching.

Back at home, an email announcing that that the son of one of our group was watching video of the trip and spotted a tiger. Dad had missed it in his tiny viewfinder.