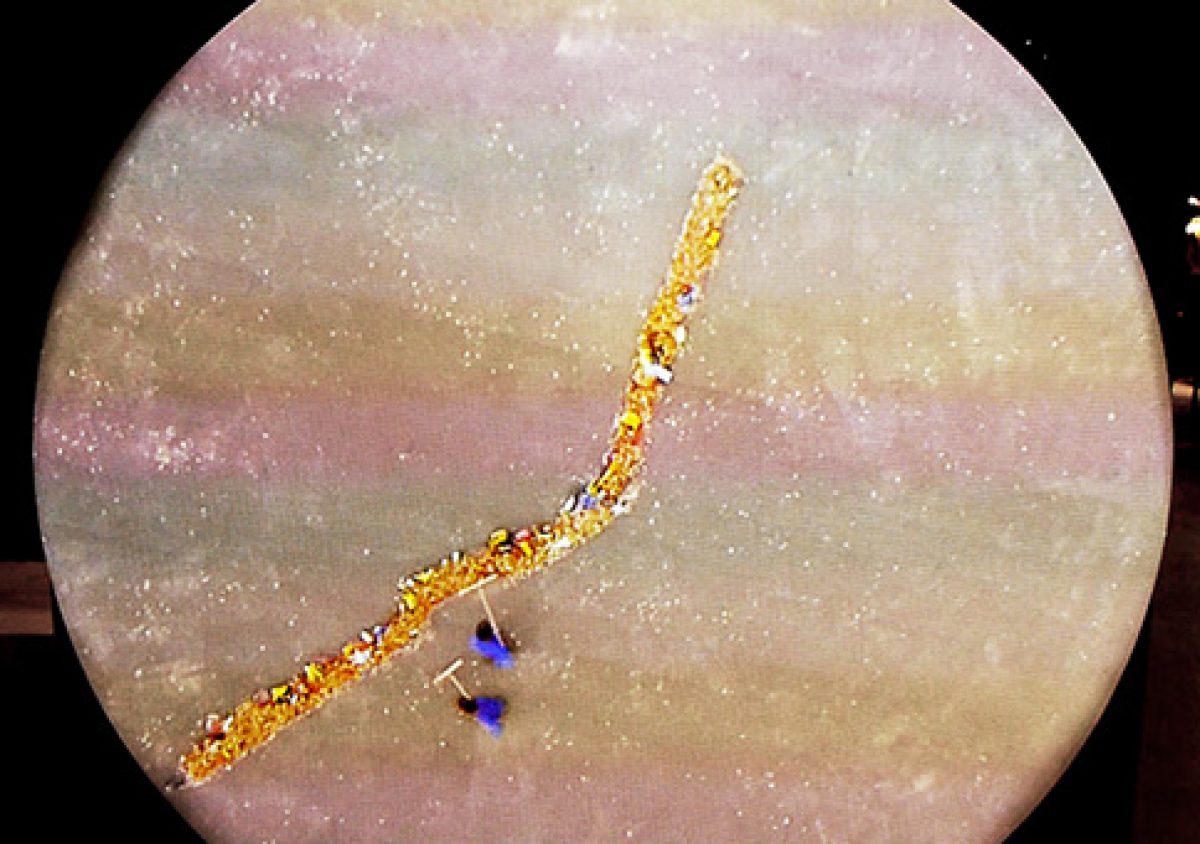 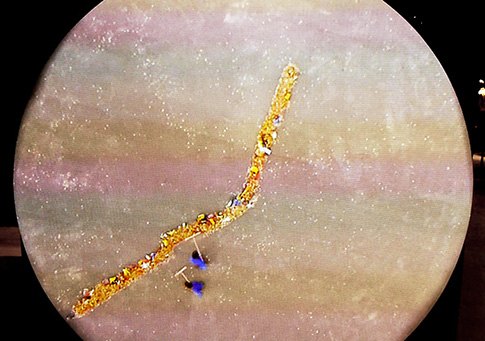 San Francisco’s Exploratorium, a reboot of the pioneering, hands-on science museum that had lived in a dark cavern at San Francisco’s Palace of Fine Arts for 43 years is now open on the city’s waterfront, “on the front porch of San Francisco,” says Executive Director Dennis Bartels. The Exploratorium has expanded to 330 thousand square feet of Pier 15 with 600 exhibits, some outside, some inside, all engineered to generate enough “ooh” to please adults and enough “ick” to please kids. 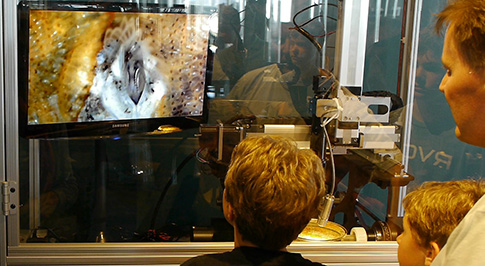 I walk up behind a ten-year old in front of a video screen as he manipulates a joy stick. Instead of shooting up alien invaders, he is maneuvering a microscope under which a sea urchin reaches out with his hairy tentacles to cut off the early retirement plans of a wriggly shrimp.

“Wow, cool!” shrieks the boy. Adults behind him erupt in a chorus of “eeyoo.”

Nearby at an “Explainer Station,” where staffers and volunteers are available to explain the various phenomena, a sign reads “Cow Eyeball Dissection: 2PM.” There is a trash can nearby labeled “For Eyeballs.”

The ick factor, however, is confined to the biology exhibit, which is managed by a real scientists, PhD’s in white coats who study bay ecology and know how all of this works. 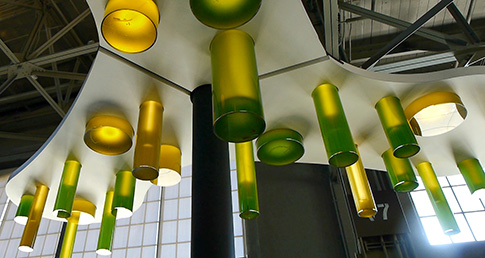 Above this Living Systems Gallery hangs a chandelier comprised of colored tubes filled with cultured algae. Beakers nearby bubble with new goo. A giant toppled Douglas Fir tree that you can actually sit inside of rests on the ground.

I knew this place the way it began, as the pioneer experiential science museum. Since its founding by Dr. Frank Oppenheimer in 1969 it has been copied all over the world. If you live near San Francisco and are under 50, you have probably taken a field trip here, or your science teacher may have been trained here. The Exploratorium tutors a thousand science teachers a year, often in the showbiz tactics that add the WOW to science.

I walk through the Physics and Human Perception Gallery and gaze at myself in dizzying hyper-3D in a mirror formed on the inside of a sphere.

I enter a room with no color, save yellow, and see the world in monochrome.

I didn’t try it but you can, uh, drink from a toilet…make that a water fountain shaped like a toilet. You will do your dog proud. 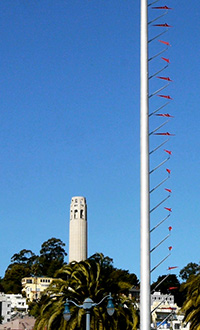 The new Exploratorium integrates both the natural and human-made elements of San Francisco and its bay. Outside, 1.5 acres of public space invites you to explore water, wind, fog and other natural elements. There is a tall pole with weather flags that blow every-which-way proving that the wind doesn’t necessarily come from one direction.

Take a walkway between two piers and become enveloped by San Francisco’s famous/notorious fog, even on a clear day, in an installation of fog sculpture by artist Fujiko Nakaya.

Inside, an observation room offers a 360 degree view of city and bay. A computer on the city side displays pictures of life in San Francisco mapped on social networking photo site Flickr and screens on the bay side track ship routes and map tides.

Its architects say the Exploratorium’s design emphasizes the exhibits over the building. They say it may be the largest Net Zero Energy museum in the world, meaning that it generates as much energy as it uses. It is cooled with water from the bay underneath and heated with a heat pump, sort of reverse air conditioner that pushes heat into the building in the same way that a cooling unit pushes hot air out of the house. The panels on its rooftop generate one thousand kilowatts of solar energy.

The Exploratorium has always been work in progress. You can watch its inventors in their machine shops much as you see chefs in open air kitchens.

In what is called The Tinkering Studio, a tribute to the Maker Movement (a return to making real stuff with your own hands) you can build, hack, create and experiment with everything from electrical circuits to toys. The results are sometimes quite bizarre. 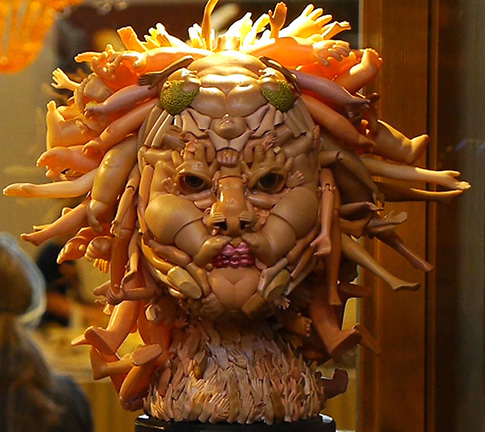 Medusa head made of doll parts 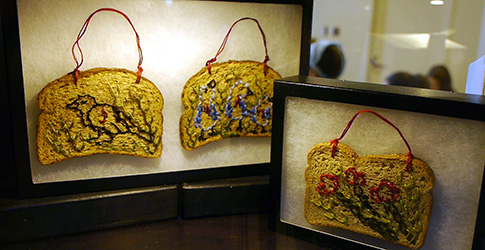 Just outside of the Tinkerers Studio is perhaps the ultimate tribute to tinkering and patience, the City of San Francisco constructed in toothpicks. It took 35 years to build. 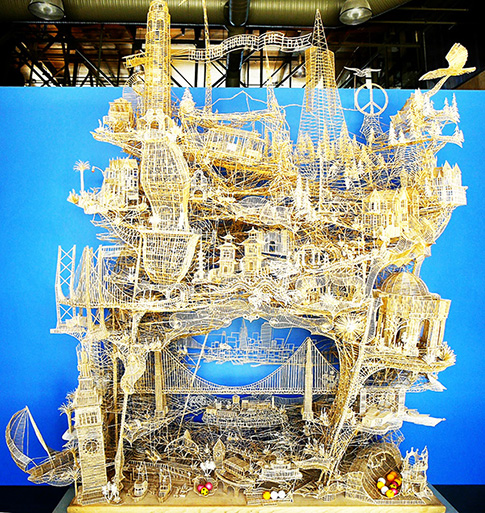 General admission is $25 for adults, $19 for youth and free for kids five and under with discounts for Bay Area residents.