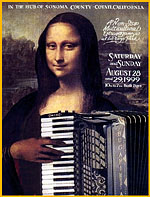 The accordion — the “the squeeze box,” the “stomach Steinway” — may be may be due for a comeback. Accordions reached their peak in the pre-rock-and-roll 1950s when primitive infomercials, featuring twangy guys with Brylcream hair, flogged instruments and lessons while squeezing out “Lady of Spain” or “Beer Barrel Polka.”

I once interviewed Brazilian gem mogul Hans Stern in his office in Rio. He said that he sold his accordion back in the ’50s and, with the proceeds, founded H. Stern.

Antique accordions will probably never attain the status of Stratavari because they made too many of them. Abandoned squeezeboxes hide in basements all across the land, and that is tragic. You see, accordions must be played or they get gas…the bellows mildew, the reeds rust. Playing an old one in a closed room could be rather disgusting.

But the accordion is on the rise again in popular culture. “Accordion Crimes,” a best-selling novel of a couple of years ago by Annie Proulx traces the history of a squeezebox and its owners. Musical fusion has tossed the accordion into the mix. Argentine tango great Astor Piazzola had a hit CD with jazz master Gerry Mulligan and this year the First Annual Accordion Convention convenes in Las Vegas.

Spending a day listening to what I considered the fraternal twin of the bagpipe was not my idea of fun. But my friend John convinced me to go to the Cotati Accordion Festival and it was a riot. Accordions aren’t just Whoopie John’s Polka Allstars. There was a Cajun band, all-star talent including Santiago Jimenez Jr., who was nominated for two Grammys for his Tex-Mex border music. There was Celtic and Slavic folk music and songs from the Canadian Labor movement. There was a tribute to jazz great Art Van Damme, who performed at the first festival and who is on the board of directors.

To the neophyte, all accordions may look alike but they are most certainly not. Wait to you hear the latest in digital “boxes.”

These don’t sound like cheap synthesizers, either. It is actually possible to score what sounds like a soundtrack from a French art film, with full orchestration, with a so-called “orchestra” digital accordion, a device that comes with a control panel that would be the envy of an astronaut.

My favorite was the Melodia Diatonic Accordion, a little lacquered beauty made in the 1970s that was ably demonstrated by Gary Siebert, leader of a band called Polka Power in Sacramento. I was tempted to take it home but I was afraid she would end up in that pile of musical instruments that I have bought, vowed to learn but guiltily abandoned (including a nine-foot concert grand). I would hate to have the little Melodia die of lack of love and the accumulation of accordion vapours.

The Cotati Accordion Festival: guaranteed to make you smile.