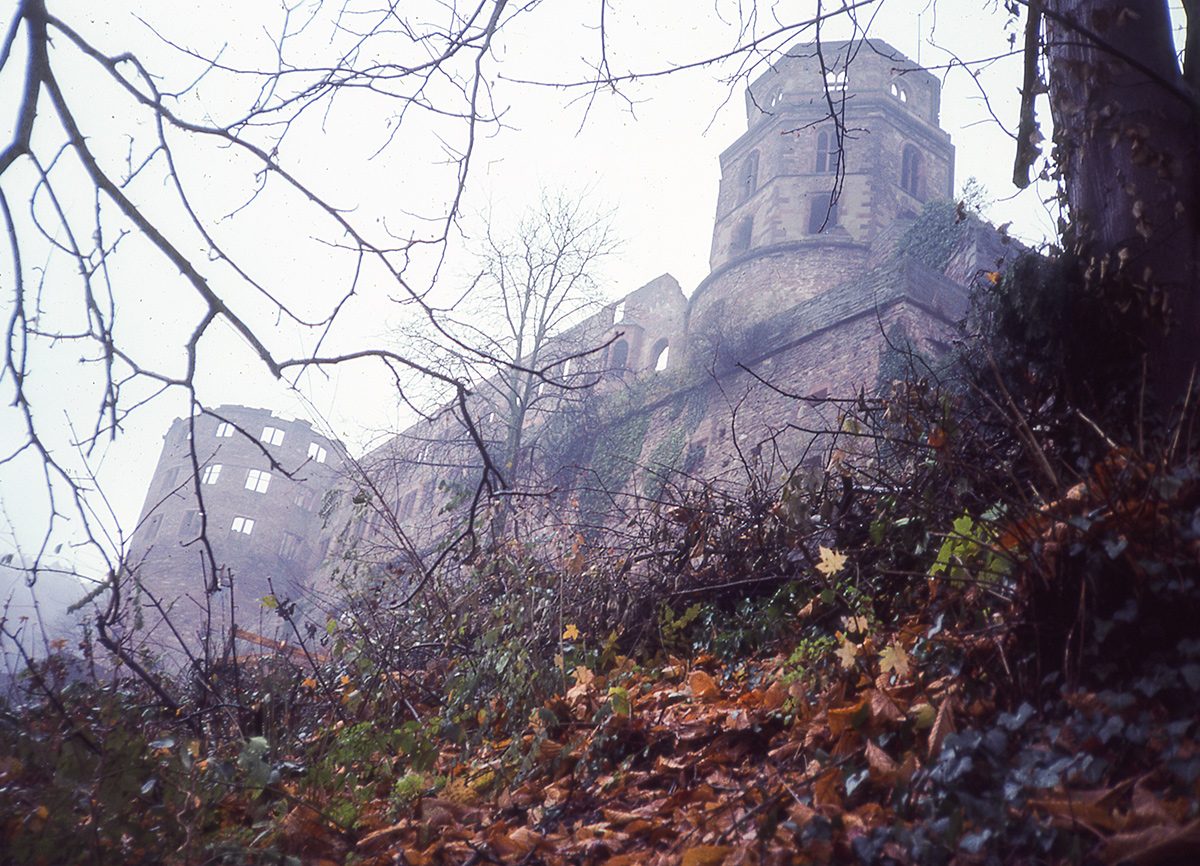 Heidelberg Castle ©Russell Johnson
If you are over 18 you have probably spent some holiday season away from home. A few years ago I flew to Frankfurt, Germany the day before US Thanksgiving for a 1/2 hour business meeting. The meeting was a bust and alone, in a terrible mood on a bone-chilling afternoon, I boarded a train for Heidelberg, where the Student Prince was alive and quite drunk.

I am stranded in Germany on an American holiday, Thanksgiving. About now, family back home is arising, soon to be consumed by bonhomie and turkey fumes.

I had just completed a half-hour business meeting that I had flown all the way from San Francisco to attend. I flew for a day, sat down in a man’s office, nodded for half an hour and left. That’s it. No yes, no no. Just a lot of nodding.

So here I am, in a cold railroad station hunched over a cheese sandwich, waiting for the train for Heidelberg. I am determined to make the best of it.

Heidelberg, on the Nekkar, is one of those castle-above-the-river places that inspired fairy tales and great works: Goethe, Victor Hugo, Mark Twain, Schuman, Brahms all put Heidelberg to words and music. It is also the setting for Sigmund Romberg’s puff pastry musical “The Student Prince.” Remember Mario Lanza singing “Student Life, its as merry as a drum and fife?” Probably not, but more on that later. Heidelberg, a University town, has more than ten museums and five playhouses. Physicist Max Planck’s name is emblazoned on a number of research institutes.

It is the first snow of the season. As the train passes through the countryside, the snow, wet and sticky at first, has now frozen on tree branches. It looks like a Swarovski-designed crystal forest.

My train pulls into the Heidelburg bahnhof early evening.

So, what do you do when you are alone on a holiday, away from family, in a place that doesn’t know Pocahantas from Pfeffernüsse, I decide to, within prudence and reason, spare no pleasure or expense.

I go walking in search of an appropriate beast or fowl upon which to gorge myself, in true Thanksgiving tradition. It is cold turkey for me as those zoftig American-style birds, with breasts like of those of Wagnerian mezzos, are not on menus here.

I spot a building with a gabled roof and a warm light glowing from its windows.

What more could I ask for: a blazing hearth, deer heads and powder horns hanging from the walls? It’s the sort of a place where you would expect a huntsman to burst through the door holding up a fistful of pheasants. I settle in and order a glass of fizzy Rhine wine. As I watch the snow fall outside, I savor venison with a rich wine sauce. I don’t say a word, just one zen-like forkful after another, alone, listening but not quite understanding the polite chatter around me.

I leave overstuffed but satisfied. The snow is now falling in gentle flakes.

So, what do people do for fun around here? Heidelberg is a college town. Just what was this student life all about?

Heidelberg has some classic student bars, some dating back to the 1700s. There is quite a lot of binge drinking going on here. This is nothing new as Heidelberg Castle, which towers (I might say glowers) above the river, was home of one of the largest wine barrels in the world, the great Heidelberg Tun, a cask the size of a small house. It once held 58 thousand gallons, but is now empty.

“An empty cask the size of a cathedral could excite but little emotion in me.”
Mark Twain, A Tramp Abroad, 1880

I settle into Zum Sepp’l, a student hangout in its truest form. First opened in 1634, it had a stuffed body hanging from the ceiling and lots of other adolescent junk such as old license plates. There is an old open faced piano with a music book that looks like a hymnal propped on it. A young man pounds fiercely at its keys.

I am prepared to love this place. Like one of my old college hangouts. A bunch of young people letting off steam, getting bent out of shape, singing songs I don’t understand. They sound bawdy. But, even if I spoke good German, I would be hard pressed to know what they were singing about, as the words were barked and slurred.

All of a sudden a guy turns around from the piano and starts yelling at me.

I switch off the little audio recorder I carry with me. He approaches me belligerently, looking as if he was ready to pick a fight.

Not so friendly after all, this place. I shut it off, smile nervously and, after a few minutes, leave. The eyes of the revelers follow me out the door.

I am clearly not wanted here.

Later, back home I played the tape for a German friend who recognized one piece as a Nazi drinking song. I still don’t know whether I’d stumbled into a neo-Nazi songfest or a bunch of drunken politically incorrect students. Needless to say, I was happy to leave.

Nearby at Zum Roten Ochsen, the Red Ox, the ambiance is quite different. This is more of a tourist establishment, charming in its own right with memorabilia left by travelers from all over the world including a plaque of some sort from Cornell University’s Hospitality School. I stumble into a party for a graduating class of Lufthansa flight attendants. They are pleasant and lovely and I am quite ready for that. I chat with a couple of them, order another beer and nod to their rendition of “Michael Row the Boat Ashore.” Bland but more to my taste than the “Horst Wessel Song.”

The next morning, after a quick tour of the castle, I head back to Frankfurt where I find myself in the midst of exuberant cathedral bells, celebrating the opening of Weihnachtsmarkt, the Christmas market. A man in a Santa suit stands in the main plaza and plays Silent Night on a hurdy gurdy. A choir sings.

I miss Thanksgiving, but I am attending a celebration we don’t observe in my country. Our day after Thanksgiving is called Black Friday, an ugly name that denotes the first day of the shopping season when men with green eyeshades pray that merchants will turn a profit and finish “in the black.”

Here, I warm up with a mug of apple cider and hear childrens’ voices in song.