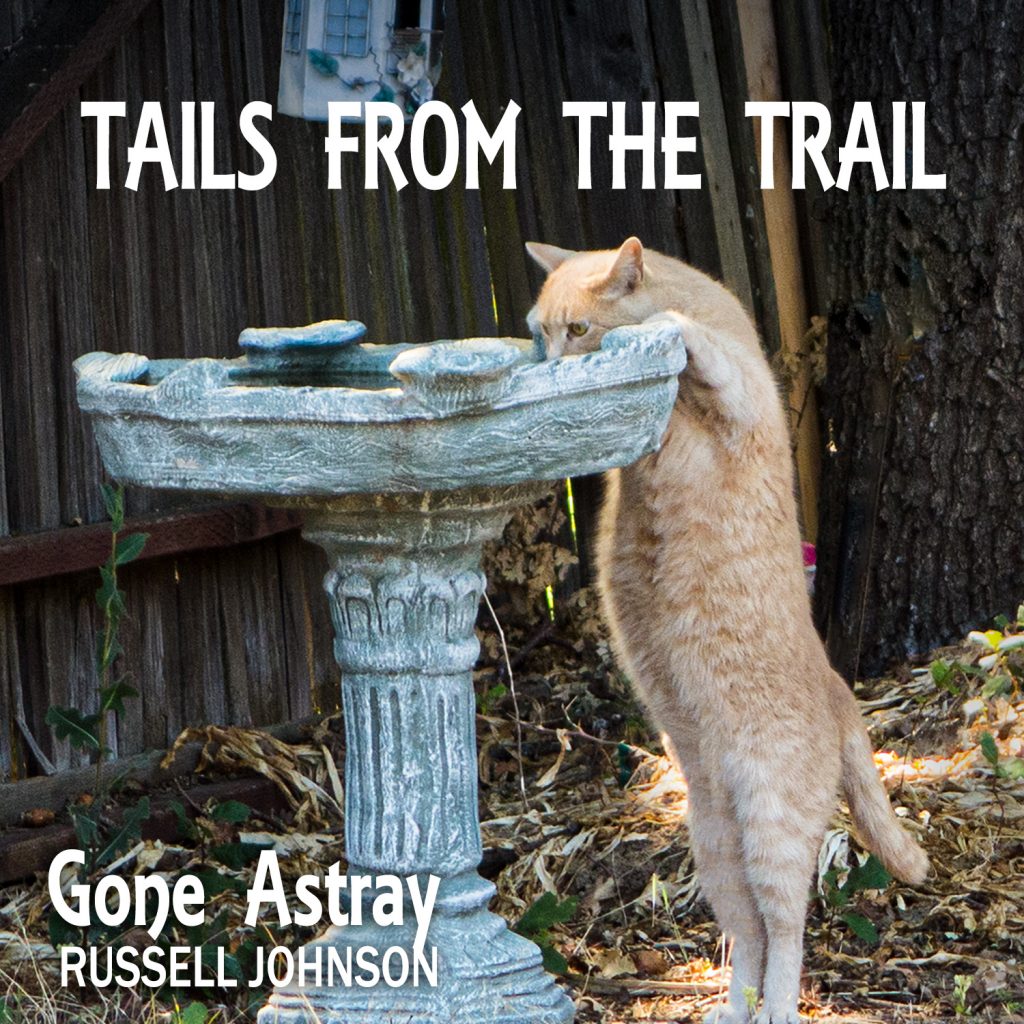 My morning walk begins along a street in my neighborhood where I am often accosted by two panhandling cats. One is a young Maine coon, who perches her dainty self at easy scratching height on a fence. If I choose to ignore her, don’t leave a treat, her squeaks and needy eyes make me feel a pang of guilt I cannot define.

Quite the opposite strategy is employed by an obese tiger, who leaves trails in the leaves with his belly. He has erected a toll station at a choke point at the entrance to a trail that he blocks while making entitled demands for kibbles and tummy rubs.

Once on the trail, which borders a vineyard, I see a dramatic shift from a habitat ruled by street-wise cats to a linear promenade of groomed dogs tethered to fashionably dressed human beings. Sometimes I stop and chat. I quickly learned that the dogs usually have more interesting stories than their minders. I especially enjoy the retired ones.

Slim, a greyhound, claims he was once a top racing dog. After a long, distinguished career, he retired at age six to do color commentary for ESPN. Slim married a terrier named Josephine and fathered five whippets. I asked him how he now feels about rabbits. He took a long pause and choked up, admitting that he doesn’t have the energy to chase them anymore, but enjoys the guilty pleasure of eviscerating a stuffed one on occasion.

But Slim isn’t the only athlete on the path. Two dachshunds, the brother and sister team of Dieter and Schatzie, gained their fame as gold medalists on the German luge team. They admit that their streamlined bodies gave them a wind-drag advantage.

Sitka, a husky, had a promising career as a sled dog. He was touted as being the next lead dog, but his name did him in. When his musher yelled “Sitka!,” Sitka sat down causing the rest of the pack and the sled to pile up on top of him. Alas, he was fired and spent months wandering in the arctic wilderness until he got trapped on an ice flow with a polar bear, a salmon, and a bottle of Stoli. He was discovered by a crew on a Zodiac from the BBC who filmed his story of compromise, drunkenness and, ultimately, survival, before he was personally rescued by Sir David Attenborough.

There are some cute ones too: A French bulldog named Antoinette, whose snorts won her an Oscar for her work as a Foley artist in the Jurassic Park films.

Matilda, the golden doodle, is an Australian immigrant (known down under as a groodle). She is a designer dog and knows it, strutting about like Nicole Kidman. Other dogs on the path have been known to flip on their backs, pant and wiggle their legs in the air at her very scent.

Last week I encountered about a dozen strangers leashed to the same human. Who were they? They were too disorganized to be an obedience class on a field trip.

“Where you from?” I asked an excited beagle. He jumped up on me, almost pushing me to the ground.

“We’re a tour pack from Des Moines,” he yelped. “You live here? You’re sooo lucky. We left our owners off at a wine tasting salon, but for us, this is the butt sniffin’ capitol of the world. Yesterday I whiffed one rated 96 by Robert Barker.”

“Today, pant, pant pant, we’re going to a day spa,” yipped a cockapoo. She was tiny but sported the mane of a British barrister. “We’re going to have a pedi pedi.”

I am really just beginning my story quest. There are so many I haven’t talked to yet including Gweneth, the golden retriever, who side eyes me while she flogs her suite of products branded Poop: healing kibbles, lavender-scented fur conditioner, and the like.

Indeed, a few dogs snarl when I approach. One, balancing on one paw, braced his hind leg as high up on a trunk of a tree as he could and left his mark, demonstrating his superiority as I acknowledged the reality that I could not do that myself.

Some just turn away, refusing to make eye contact, like most cats I know. But I am sure I’ll engage them someday and hear their tales of puppy love, purloined porterhouses, junkyard adventures. Each probably worthy of a segment on NPR.