This loud bottle blonde was holding court at Judy’s restaurant in Sedona, Arizona. I think she was a tour guide because her voice had the rehearsed nasal whine of one experienced in using a bullhorn. She mentioned her Master’s degree twice. She talked about the spiritual vortices her group would be visiting the next day, about male energy, female energy, magnetic lines of force.about her divorce.

Welcome to Sedona, Arizona which, like other magnificent places, attracts some odd ducks. 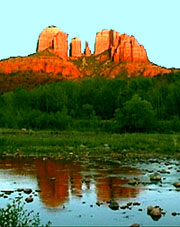 As I listened to this woman, I thought about a New Age wine and cheese party I attended a couple of years ago. As I am undeniably middle-aged I felt a bit politically incorrect. I had just returned from Angkor Wat, the grand temple in Cambodia and a friend, who is otherwise very reasonable, asked me “what did you feel?”

“Did you feel…the SPIRIT of the place?”

“It was a really awesome piece of architectural rubble,” I replied.

I knew what he was driving at and “awesome” was about as far as I was willing to pander to New Age jargon. I gave up straining for spiritual meaning in inanimate objects in college after a graduate course in art analysis. “Is it art or is it soup?”

I smugly lectured my friend about the fact that most of these spectacular temples around the world were built by egomaniacal god-kings over the bones of slaves. I guess that if I had some feeling it should be one of sadness, but my imagination couldn’t see past the Khymer Rouge bullet holes and botched attempts at restoration.

I have great respect for belief in meaningful symbols. They add richness and comfort to life

Symbols of earth and nature and the notion that we — with due respect — share a planet with everything from plankton to platypusses form the basis of sensible religions and codes of ethics.

Most tall mountains and physically beautiful places have symbols and sacred legends attached to them. Director John Ford made Sedona Hollywood’s symbol of the “Old West” in his shoot-em-up oaters. Native Americans claimed Sedona was a sacred place and for good reason. You just feel there has to be some grander rationale for its beauty than water erosion and the movement of tectonic plates. Sedona is also a haven for traditional religions with more churches (and a synagogue) than I have seen anywhere. They offer some of the most inspiring architecture in the area. Whatever your belief, this is a good place to practice it.

But vortexes? The traditional definition of a “vortex” is a whirlpool that creates a vacuum, sort of like the swirls of a flushing toilet. To New Agers vortexes are where of earth’s magnetic lines interact to produce energy: plus and minus, male and female, unisex and undecided. Bell Rock and Cathedral Rock are considered vortexes. Why do Ross Perot’s “sucking sound” or crop circles come to mind?.

You can buy vortex maps, canned vortex, crystals of every shape and meaning, have your aura cleansed, get channeled, sunburned, drunk and yowl with the coyotes in Sedona. Every night I was awakened by their mournful yelp.

Sedona, like almost everywhere else these days, is going upscale. Mom and pop motels are being replaced by $200/night-plus hotels and bed and breakfasts.The Graham Inn and Adobe Village is one of those places. Proprietor Roger Redenbaugh is a male Martha Stewart. I watched him one morning precisely positioning each chair in the dining room. Each luscious pumpkin pancake sits on each breakfast plate as if placed by a feng shui master

Rooms have themes. My wife and I drew the Champaign Suite: wistful little angels emblazoned on an avalanche of pillows. A step above velvet Elvises, granted, but hey, it’s a bed and breakfast. The towels were thick and luxurious and the sheets had 300-plus threads. Another suite is a post-modern log cabin and another, called The Lonesome Dove, is done in sage and crimson with a red rock fireplace and hand-painted cowboy murals.

Diners should prepare for New York prices in Sedona. I tried two highly-recommended restaurants, Judy’s and The Heartline Café. They had decent but expensive fare with most main courses over $20. What impressed me was the total lack of presentation. Food was lobbed on plates hashhouse fashion. The Heartline’s wine list was extremely expensive. I settled for a glass of common Aussie Shiraz. A glass cost me the same as a bottle of the same stuff at home.

But you don’t come to Sedona for dining. You come for its magnificent vistas. They are best viewed and photographed the first two hours and last two hours of the day when the colors are warmer and the temperatures cooler.