Long before Rush Limbaugh and the right wing screamers discovered a way to convert foul breath to radio waves, there was a morning disc jockey in San Francisco who brought joy instead of anger. The late Dr. Don Rose and his slurping, snarfling dog Roscoe, accompanied by an orchestra of arooga horns, falling bodies and quacking ducks woke up The Bay with an stream of unabashed silliness. He shouted out the weather forecast like a train conductor: Saaan Francisco, Saaan Raquel, Saaacatomater.

Sacramento is not Saacatomater anymore.

Sacramento was California’s first Gold Rush town. Founded in 1849, provisioners such as Crocker and Huntington, Stan 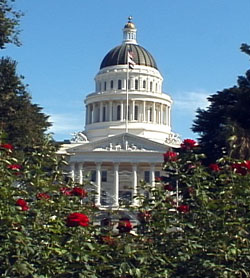 ford and Hopkins became robber barons without lifting a pickaxe and schemed the transcontinental railroad. A statue commemorating the Pony Express, which also began in Sacramento, stands in the “old town.”

Saacatomater was an appropriate name for the California capital during the 1970s, when I worked as a cub reporter there. Sacramento was the buckle of California’s farm belt with a tomato dehydrating plant within eyeshot of the capital rotunda. There was a supper club called Aldos where everyone celebrated anniversaries and Frank Fats where lobbyists and politicians savored pork. Dining out for most people meant Dennys, Arbys, Sams and Sambos, the latter a chain that died of political incorrectness.

A few weeks ago I returned to Sacramento. In the early 70s I covered Reagan’s second term inauguration, rubbing shoulders with Dean Martin, Sammy Davis Jr., Frank Sinatra and Buddy Ebsen. This time, alone and uncredentialed, I wandered out into a balmy election eve, dined on a nicely prepared ginger-soy salmon at The Esquire Grill, a political hangout I am told. Then, after listening to two Democrats being painfully pummeled by a swarm of Schwarzenegger bees, I crashed two parties. First, Democratic candidate Cruz Bustamante’s, populated by what looked to be dressed-for success capital functionaries with flagging smiles. I went on to Aahrnold’s party, which had the mad-as-hell demographics of a suburban PTA meeting: true believers with fire in their eyes. I was pursued by a large man with an Aahrnold cap and a roll of stick-on badges. George Bush put in an appearance, in a two-dimensional sort of way, as a full-size cardboard cutout, his finger pointing in the classic Great Leader Pose seen on bronze statues all over the world. The Terminator himself, however, was conspicuously absent, holing up instead with his pals in Hollywood.

What will Aahrnold find in Sacramento? Much more, certainly, than I did years ago. Over the past two years there has been a restaurant boom in the capital with dozens of new openings by “name” chefs plus many new ethnic restaurants. J and K Streets, around the lush capital grounds, have become restaurant rows. Some have outdoor seating, perfect for Sacramento’s hot, dry summer nights. 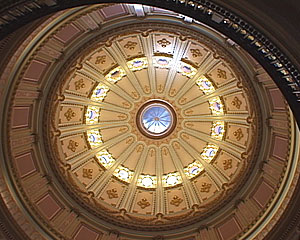 Sacramento is a lush, pretty city. The 1860s capitol building, restored in 1976, is as graceful as government architecture gets. The Senate and Assembly chambers look like the sets of “Mr. Smith Goes to Washington” kinds of movies. In fact, with a flip of the switch, they can be lit for TV. The building is set in a sleepy park with a well-tended rose garden.

I drove through the swank neighborhood called the fabulous 40s, where Ronald Reagan resided during his first term. I lived a few blocks away (in the 30 numbered streets) in a pleasant tree-lined Beaver Cleaver neighborhood of smaller homes. I drove past the corner house that was rumored as one of the possibilities for Schwarznegger, a faux chateaux that certainly didn’t look its asking price of $3 million. Ahh..California real estate.

Old Sacramento, on the riverfront, is one of the best “old-towns” in the US, even though the goods sold in some stores tend toward the cheesy. There are nicely-restored Victorian buildings including the excellent Firehouse restaurant where you can dine in a shady courtyard. The restored paddle-wheeler Delta King bobs hotel guests to sleep on the wakes of passing pleasure boats. 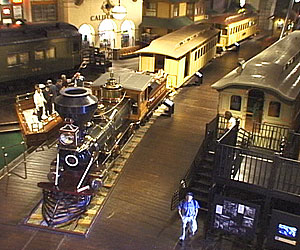 The California Railroad Museum is perhaps the best historical museum in the state. It is a huge roundhouse full of classic locomotives, cars and other railroadia. You can almost smell the oil and steam.

The Crocker Art Museum may not be largest gallery in the world, but it may be one of the most gracefully designed. It has a small but excellent collection of California, classical and contemporary art. (Since I last visited, it built a modern art wing which is now world-renowned.) Victorians are…well…Victorians, a bit too frilly and precious for many tastes. But the Queen Anne in which the Crocker is housed, is a dance of flowing curves and polished woods, a subtly graceful lady.

Sacramento is too often skipped on a visit to California, a neglected turnoff on the road between Lake Tahoe and San Francisco. It shouldn’t be. A visit to California’s Gold County, for example, is not complete without exploring the place that fed and provisioned it. It is also just downright pleasant, a very different take on California

Earlier in the day I hiked down to the river past an abandoned tomato dehydrating plant in West Sacramento, across the golden Tower Bridge that separates the city’s dusty past from its modern affluence.

It’s not Saacatomater any more.