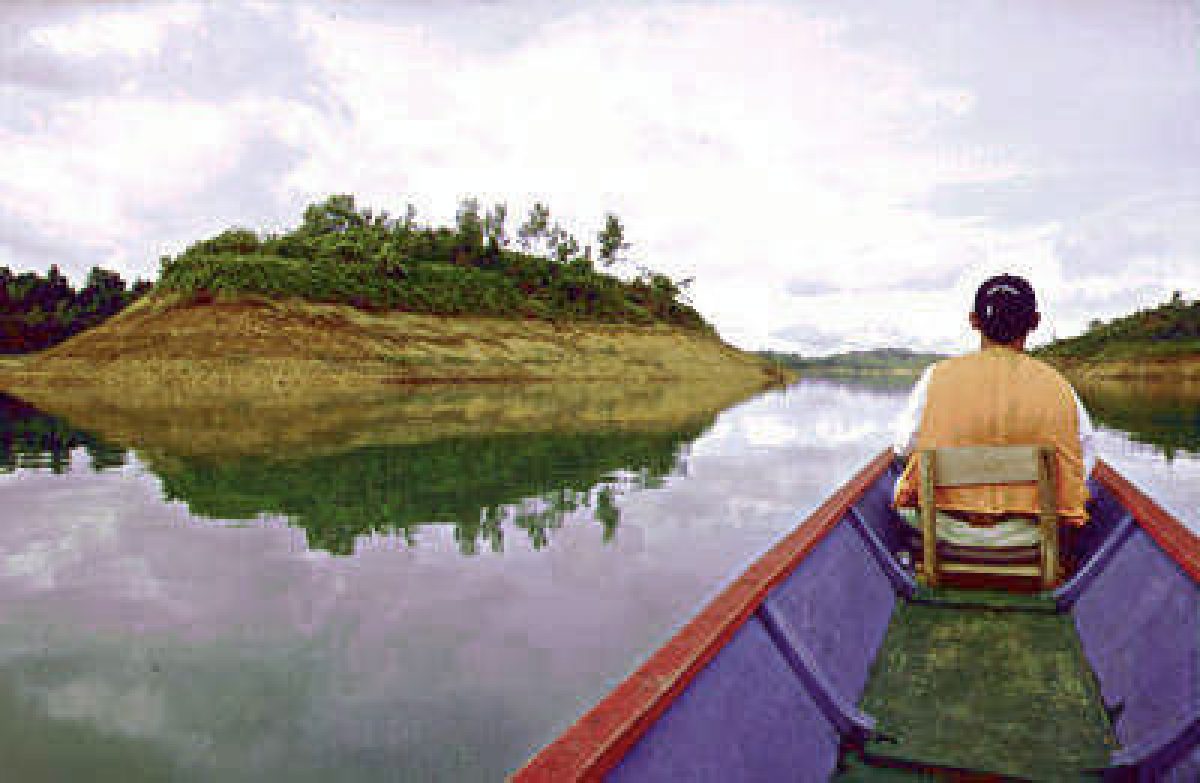 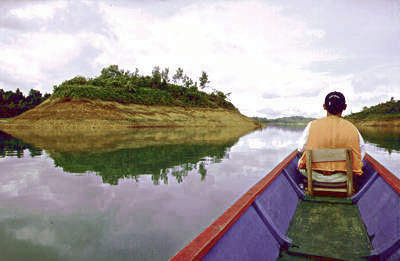 “A terribly jungly place.”
Maugham
“They don’t call it a rainforest for nuthin.”
Johnson

I am back in Borneo. I first visited Sarawak in my childhood imagination. It was giant lillypad floating on the map of Oceania with a reputation earned from Victorian tales of headhunters, missionaries, orangutans, tic-toc crocs and cuddly pythons. When I saw Sarawak for myself, in the 1980s, it lived up to my dreams. Sure, penis piercing and the flattening of women’s heads in vices (a beauty treatment) were history as were the headhunters (even though ceremonial skulls still hung from the rafters), but the jungles still steamed, the macaques still screeched, the hornbills still displayed their magnificent schnozzolas, and Sarawak still had a faint aura of danger. Going there gave one bragging rights as an adventurer. So what if you stayed at the Holiday Inn, chicken feet were on the menu.

Today, Sarawak is still “terribly jungly” and exotic and inscrutable enough to evoke Walter Mittyish dreams of being one of the Rajahs who one ruled the place. There is a big difference, however. 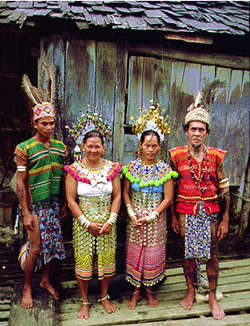 Now you can muck around the jungle, visit tribal longhouses where little has changed in half a century, explore wild rivers in long canoes and still be back in time to take a swim in an Olympic-sized pool, sip a Campari at sunset, savor a fillet of Aussie beef and, if you really must, fall asleep to opening NASDAQ prices on CNBC. It’s this hot new travel market called “soft adventure” folks, coming to a backwater near you.

Now let me go out on a limb (taking care that a python does not occupy a space between myself and escape). If I were to recommend one place for a first time Asia traveler to visit, it would be Sarawak. It is, today, adventurous but safe and very approachable. 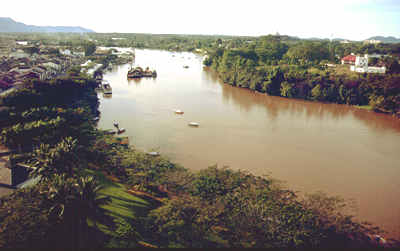 Kuching, the capital, is regarded as one of the cleanest cities in Asia. Most people speak English. The Holiday Inn that was once the pride of Kuching, is now a tired 70’s Cheez-its box compared to the Crowne Plaza and the Hilton where my wife and I occupied a two room suite on a business floor with a view of the Sarawak River for less than $US100/night, including breakfast and “happy hour.” The old waterfront, which was once ramshackle markets and shophouses, is now a public promenade of stones laid out in tribal designs. On our first day, a man engaged my wife in conversation, asking where she was from.the usual opening lines of a scamster or illegal tour guide. But, the pitch never came. He simply said: “Welcome to Kuching,” smiled sweetly and walked away. Not once in a week and a half were we approached by a tout of any kind. 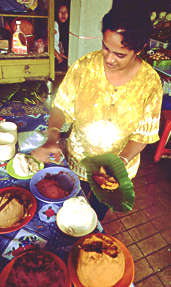 Sarawak is a tasty mixture of cultures and cuisines. One night we shared a dinner table with the dean of a Malaysian business school (a Muslim woman dressed in a beautiful chador) and a Chinese attorney who told us that law was not a lucrative profession in Sarawak as most people settled disputes on their own. Sarawak is predominantly Christian, even though it is ruled by Muslim Malaysia and also has a large population of Malays, Chinese and East Indians. Missionaries swarmed over the island of Borneo in the 19th century and eventually converted most of the local tribes.sort of. Two longhouses I visited in the 80s were still hedging their bets with a picture of Jesus Christ on the wall, but with spooky spirit figures guarding the entrance and ceremonial heads hanging from the rafters.

The markets at the end of the promenade offer a wild variety of local produce such as jungle fern, whiffs of Sarawak pepper and the moldy-bubblegum odor of durian. Kuching has a fish market that doesn’t smell like fish, period. It is that clean. The shophouses across the road offer local crafts and, except for doorstops carved in the shape of hornbills, offer little tourist junk.

Some of the masks and totems are quite scary (will they work on deer or raccoons)? While not antique, crafts are reasonably priced, locally made and unique to Borneo.

What is now called Kuching was christened Cochin (port in Chinese) by English soldier of fortune James Brooke, the first white Raja of Sarawak (the land was given to him by the Sultan of Brunei). Cochin later morphed to Kuching because of presence of mata kuching, a fruit called “cat’s eyes” that grew on the bank of the Sarawak River. Kuching today calls itself “The Cat City” even though the local word for cat is pusa. But kitty kitsch is more marketable than port kitsch or fruit kitsch so Kuching has numerous statues of cats in various stages of preciousness scattered throughout the city plus the world’s first and only Cat Museum, at Kuching City Hall. The museum is quite interesting and entry is free of charge. It offers everything from descriptions of the role of cats in various cultures to some 2,000 ojets d’chat from antique Chinese paintings (the Chinese had little regard for cats) to a collection of “Hello Kitty” paraphernalia. 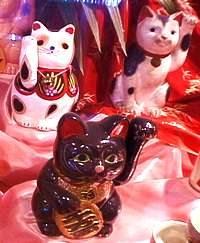 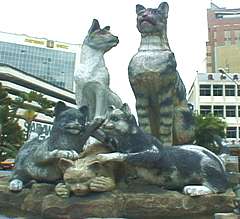 Redmond O’Hanlon’s “Into the Heart of Borneo” is considered a classic in adventure travel literature, one of those “a jaguar ate my knickers” accounts we all know: a doofis Brit with a gift for language battles snakes, leeches and outbreaks of hyperbole to reach some impossible goal, in this case the Sarawak-Kalimantan border and a rare rhinoceros. Fun reading, but perhaps a bit over the top, even for the 80s, about the same time I paid my first visit.

This year, however, we went into the heart of Borneo, to the Sarawak-Kalimantan border, in an air conditioned van over a paved road. About five hours out of Kuching we boarded a small boat and headed across the crystal clear Batang Ai reservoir, searching the horizon for the place we were going to stay. We did not spot the Hilton Batang Ai Longhouse Resort until we were almost on top of it. This is not your uncle Conrad’s Hilton. Hilton manages the place for local owners who built it to be almost invisible in the jungle. It buildings, fashioned in the style of traditional longhouses, hug the hills and are stained the color of trees. Rooms are air conditioned, beautifully appointed and reasonably comfortable, even though they are a bit dark (not nearly as dark as a traditional longhouse, however). 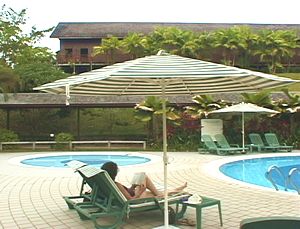 This is what we mean by soft-adventure, one of the fastest growing and most appealing markets in travel. One day we set out to visit a traditional long house. The river trip was the same as I remembered one 15 years ago, a fast boat ride up a narrow river under towering trees and hanging vines, monkeys and cicadas screeching and whining like power tools, birds and butterflies with the color and vigor of technicolor fairies.

We visited a long house. It looked exactly the same as the one I had been to years ago. Same chickens and pigs (they recognized me) running around beneath the stilted structure, the same dances. No heads in the rafters, however (hidden away, said our guide, so as not to upset the tourists). Same daily monsoon storm while we were boating back. Warm rain pounding us and soaking us thoroughly. It felt good. They don’t call this rainforest for nothing.

What is better about this than in the past? We went to a longhouse but didn’t have to sleep there on a hard floor, listen to a chorus of snorers and snorting pigs. We got a good feeling for life there but then we went away. We could escape from the jungle heat with a dip in a pool. We could savor a nice bottle of Aussie plonk and a fish or beef filet instead of a gristly chunk of mystery meat and a glass of sickly rice wine. We had a guide who realized that people don’t travel to the opposite side of the earth without gaining some knowledge and insight into the culture and nature they visit. Also, today, there is a much higher regard for protection of the environment and culture of the people we visited. Last time we were told to bring cigarettes and candy to our hosts. This time it was nutritious food, pencils and notebooks for the longhouse children. The Malaysians who rule this part of Borneo may have incensed the world by laying it bare with clear cut logging, but at least in tourism, it is doing some things right.

Although I rate my earlier trip to Sarawak (along with other visits to Sabah and Kalimantan) great experiences, it is still a jungle “out there” which is sometimes more enjoyable to simply visit rather than immerse yourself in its stew of leeches, and pythons…and did we mention some 450 breeds of ants.

“Hello, is this room service?