David Hockney embraces technology for his art. Now in his mid ’70’s he is the focus of the largest exhibit in San Francisco’s de Young Museum’s history. 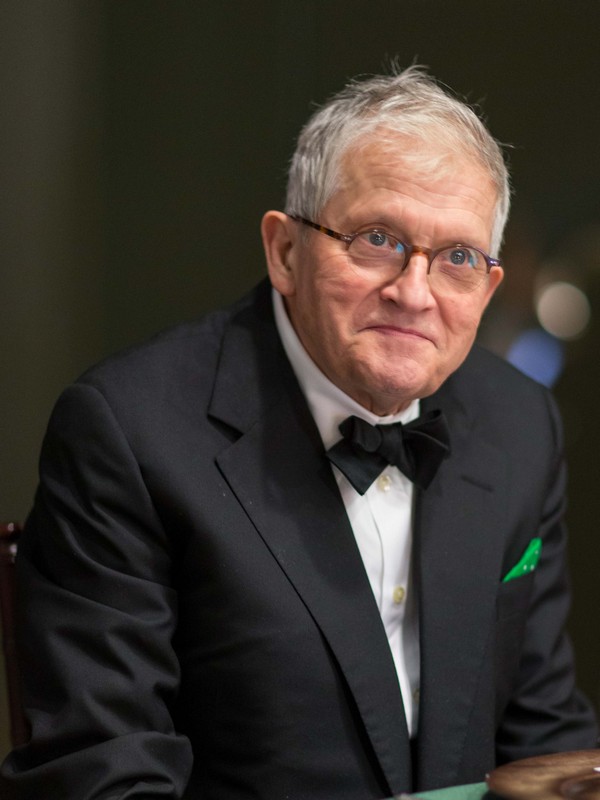 Whenever someone says that generating a complete piece of art on a tablet or computer isn’t “real art”, I cringe. No! Technology is not cheating. Since at least 1430, it  has played an important role.

A recent visit to the David Hockney exhibit at the de Young museum in San Francisco’s Golden Gate Park proved that point.  Featuring more than 300 works and open only until January 20, 2014, this is the largest exhibit that the de Young has ever staged and the first since 2002 to show the breadth of Hockney’s oeuvre.

David Hockney: A Bigger Exhibition shows Hockney’s breadth of talent, from the brightly colored portraits that he generates on his iPad with the Brushes app to a room full of charcoals of the Yorkshire countryside.  Sometimes he creates the same scene over and over, depicting the effect of different seasons on the paths and foliage.

Hockney, recognized as one of the important artists of the  British Pop movement, lived in California for almost half his life, and the colors of southern California influenced his portraits and landscapes. In one you can almost feel the lush forest breathing.  Another version of the same view shows bare branches and ruts in the purple road.  Hockney finds the iPad useful to set up palettes of color corresponding to the different seasons. 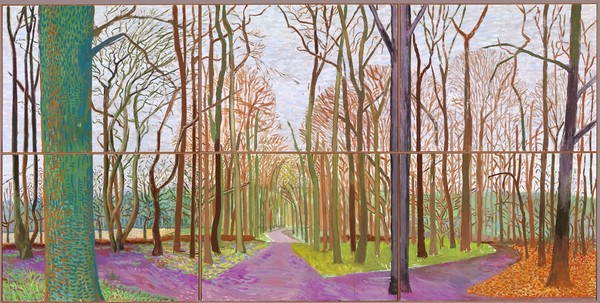 Some of the pieces in the de Young exhibit are twelve feet high and almost overpowering.  In Yosemite I, a drawing Hockney executed on the iPad and printed on six sheets of paper, he creates depth with varying shades of green and blue mountains giving the viewer the feeling of flying over the forest into the canyon. 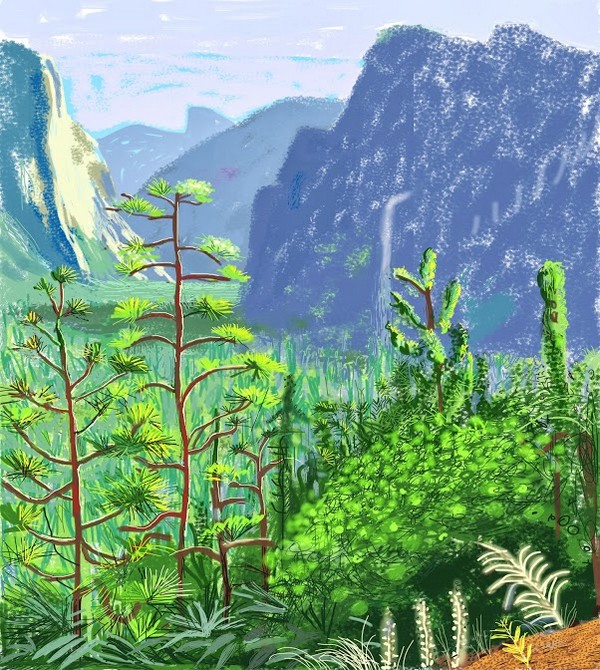 I stood fascinated in one darkened room where digital displays rotated through some of Hockney’s paintings.   One in particular showed the evolution of a plate of oranges that he rendered on the iPad.  Stroke after stroke, the oranges developed. Highlights, shadows, the subtleties continued long after I thought the piece could have stood on its own. Yet the process shows that while the piece looked bright and simple, there was oh so much more to making it a work of art.  Watching the process made me appreciate his portraits that he executes on the iPad all the more.

Hockney experiments with multi-display point-of-view videos that drive you down country lanes in the English countryside.  A room of the exhibit is dedicated to his 2012 video installation on eighteen screens, “The Jugglers” featuring a stage of jugglers in a composite perspective that creates a field of vision that is greater than what the normal person can see – kind of a digital cubism or could we call it quantum video?

Hockney took some time off from painting for his own science project.  He challenged the belief that the great masters of painting did not use any tools but their own eyes.  In the last part of the exhibit, over three walls, he shows what is almost a massive scrapbook of western art.  Around 1430 there is a noticeable change where the subjects of paintings become more relaxed, the environment more natural.  In his book, “Secret Knowledge: Rediscovering the Lost Techniques of the Old Masters”   Hockney shows that artists must have used optical tools such as parabolic mirrors that could project images onto a canvas, (think camera lucida obscura that had been around since the 900’s).  He claims there are certain noticeable distortions – an “optical look” that makes the works no less artistic.

“Artists will use any tool available,” says Hockney in a Charlie Rose video, claiming that the old masters  would not divulge their secret technology, saying they, like other professionals, were competitors.  Hockney’s unabashed use of the iPad, apps, and digital printing in the works on display at the de Young certainly legitimizes them as tools of the artistic process.