On Foot in London 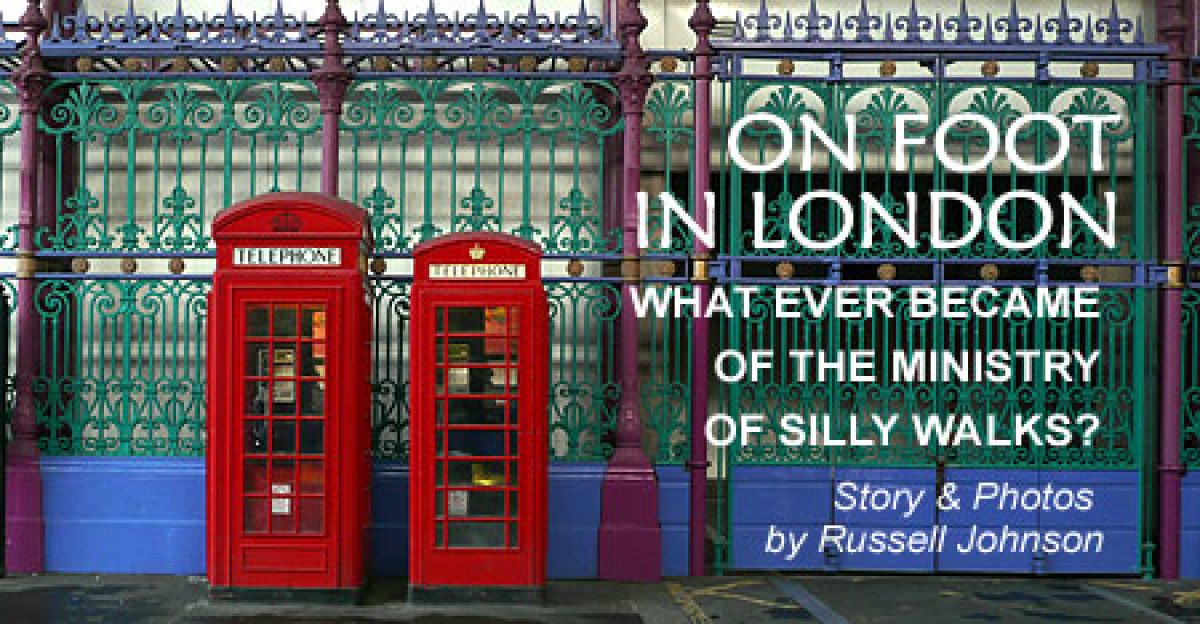 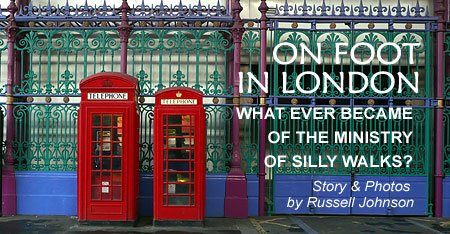 As a Monty Python fan, London in my minds eye is a city of silly walks: eccentric lopes, tortured tangos and Teutonic goose steps. It is really quite opposite that, in fact. That’s why the Pythons were funny. Last week in London, Pat and I settled into an apartment off Fleet Street and toured old London by foot.

I admit that I now live in a place where the only crowds are formed by geese, which the local authorities are employing dogs to break up, but I do spend a fair amount of time in places like New York, Bangkok, even Delhi, so I am not a weenie when it comes to huddled and non-huddled masses. But walking in London this time around was culture shock.

Yes, the Brits still form orderly queues. Every night my wife and I walked past a taxi queue of young barristers, obviously working late at their law firm, dressed in lookalike black coats, some with hats… like Magritte men minus the nose fruit. But walking on High Holborn one evening at rush hour was unnerving…even scary. You’d think that Brits, who drive on the left, would still be walking on the left. But that is old derby. Now there are no rules. Right, left, diagonal, no stopping, whatever it takes to get there. Everyone for himself. There is a big difference in places like Thailand or China where the crowds are just as large, but where people meander on through, negotiating with and often deferring to everyone they encounter. That works for cars and trucks as well. In London, I was downright scared stepping off a curb as, unless there is a striped zone, nobody defers to pedestrians. 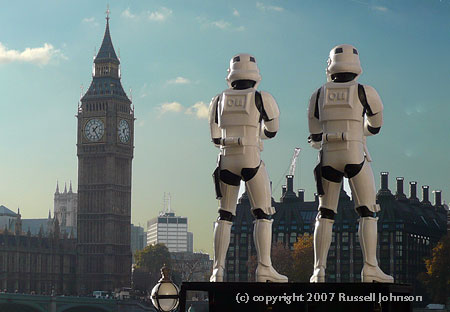 Surveillance is Everywhere in London

So, brace yourself for the madness, always look to the right, wave at the ubiquitous spy cameras on the poles, stick to the side streets and enjoy a rewarding, if not so silly walk through old London. Despite the fact that the dollar is now pegged at the value of a banana peel, London can still be within reach of us impoverished Yanks, or septics, as we are called in Cockney rhyming slang: “Yank, Yank, septic tank.” 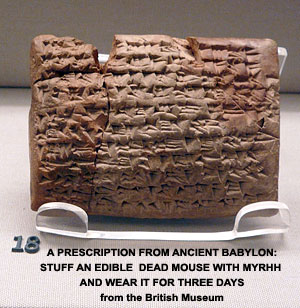 If you can score a last minute hotel deal or a reasonable private apartment as we did, there is much that is free and within walking distance in Central London. The museums: the British Museum, the National Gallery, the Tate and the Tate Modern all offer free admission except for special exhibits and events. You could easily spend the better part of a day at each.

For 6 pounds (a bit over US$12) we took a themed walk through the Old City. We joined David, an American expat and literary historian, for the Shakespeare/Dickens jaunt…fascinating, even if most of the historic areas have been paved over with Jetson’s-style architecture. But that may be a good thing as he conveyed (despite the ham acting) how inhumanly miserable London was in Dickens’ time. London Walks has another guide who is said to be the world’s foremost authority on Jack the Ripper. Best not to think about that while wandering the narrow passageways at night.

But wander we did. There are still Dickensian passageways with tiny barred windows to keep out bandit children. One such lane, Wine Office Court, was a few steps from our apartment. There rests one of the oldest of the “so and so drank there” pubs in the world. Dickens referred to “Ye Olde Cheshire Cheese,” rebuilt after the Great fire of 1666, in “Great Expectations.” Samuel Johnson, who lived around the corner, Boswell, Voltaire and Thackeray imbibed there. 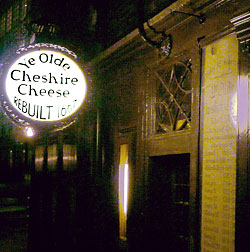 It still looks…very old. You get the feeling for “The Cheese’s” storied, ale-stained past as you descend into it from the first floor pub and “Chop Room” down steep, narrow stairs with low ceiling that force you to duck. You go past tiny stone rooms that look like the habitat of Mr. & Mrs. Mole, but today furnished with wooden tables with mostly young people nursing their pints. It ends up in a bar in the cellar, parts of which are said to be a 13th century monastery. That’s where we ordered our Fish and Chips and saluted Johnson, Dickens, friends with an apartment, frequent-flier points and the precious feet that brought us here.

I still like the notion of a “Ministry of Silly Walks.”  We all need to lighten up.