Not So Noir Anymore: The New Downtown LA 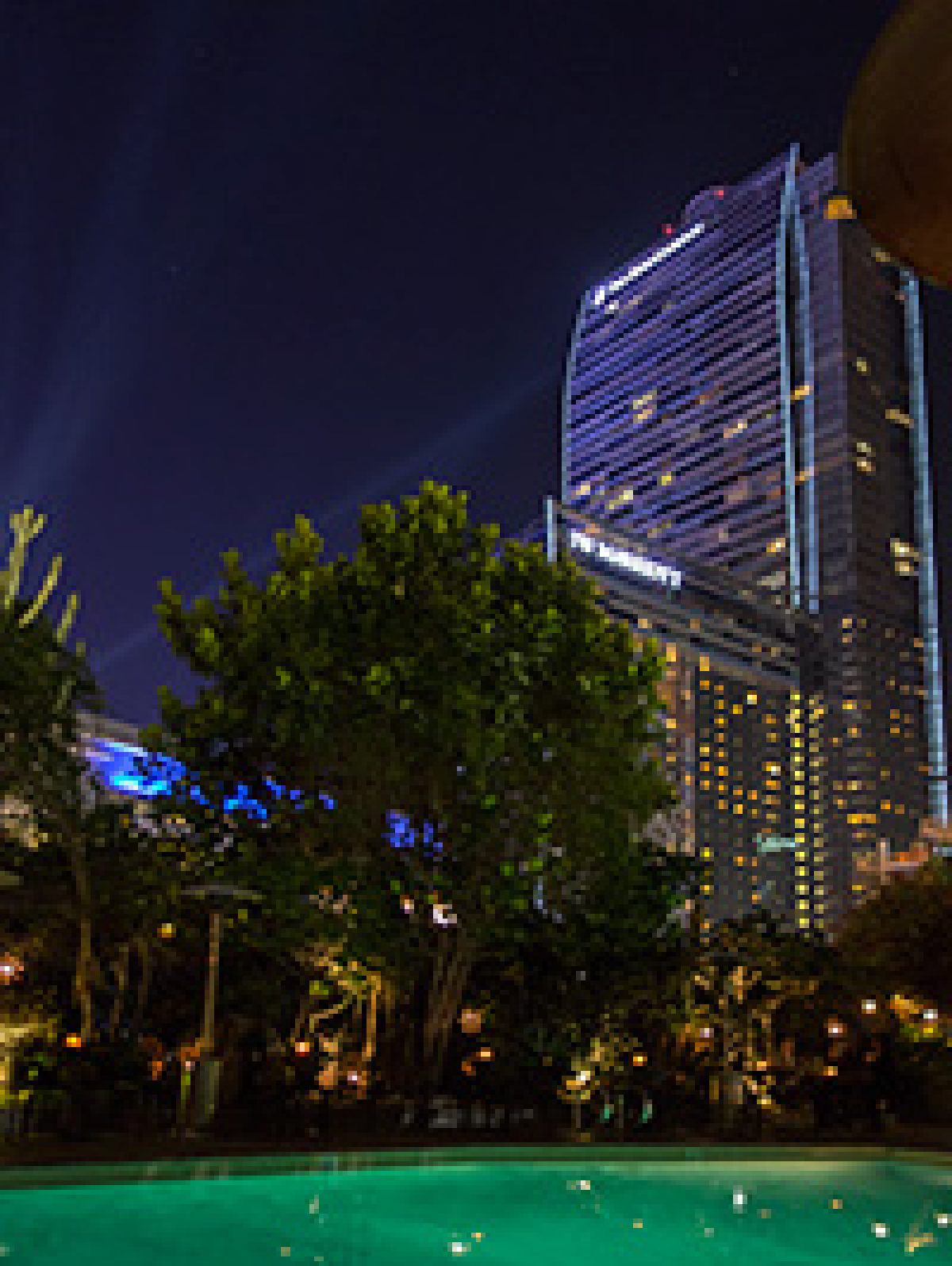 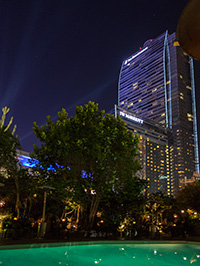 I hear it fluttering above: chucka, chucka, chucka. Officially, the California State Bird is the gentle Valley Quail. The exception is in Los Angeles where that honor goes to the helicopter: following bad men, televising traffic tie ups and car chases. We are in Downtown LA, it is 2AM and my wife and I are rudely awakened: chucka, chucka, chucka, woop, woop.

Next morning I check the police blotter: A bar fight. But not in one of the sleazy Open-At-6AM dives that I associated with this once LA Noir neighborhood, but a at club inhabited by high-strung twenty-somethings.

Welcome to a Downtown Los Angeles of mixed messages: a storied, sometimes tawdry history now burnished with gleaming glass and steel, including a Ritz Carlton monolith looming, chopper level, above me. I am at ground-level, poolside at the not-so-ritzy Figueroa Hotel peering up at the top one-percent, watching searchlights scanning the skies, LA-style, for nothing in particular. 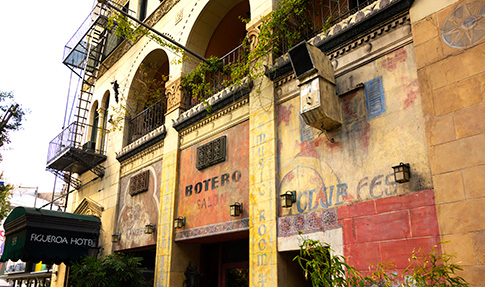 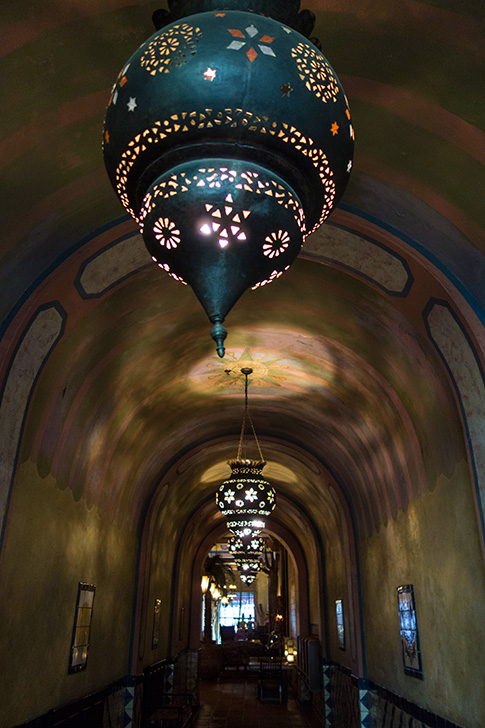 The Hotel Figueroa is described in travel guides as a Moorish-style tourist-class hotel, and yes, it does offer the option of renting a live camel for special events. But it is, in actuality, a cultural cross-dresser spanning continents. Its lobby, paved with Mexican tiles, is illuminated by Moroccan lamps. A large painting of General Vallejo, the Spanish Governor of California, hangs above. The Lord Buddha is represented in several versions and there is a giant door from Kashmir.

So, I say to its owner, a big Swede named Uno Thimansson. “You’ve obviously traveled a lot.” “Nope,” he says, even though he claims that he once worked as a dishwasher in Morocco. He just collects most of the stuff from LA area dealers. 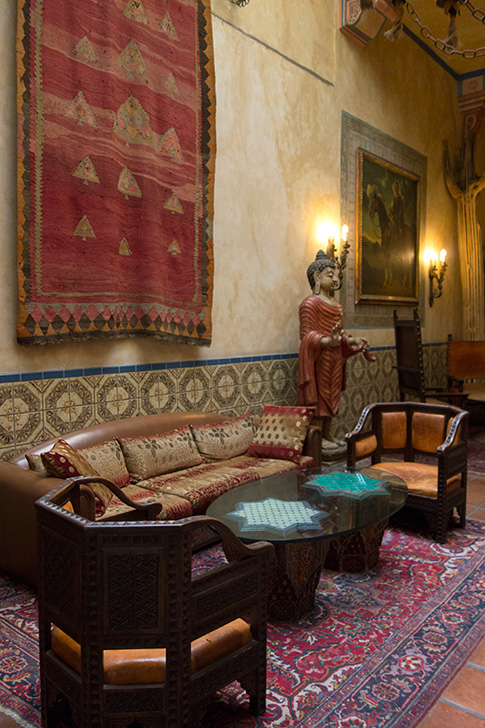 Thimansson bought this hulk of a building in 1976 after it had plunged from its 1925 debut as a YWCA to a mid-century timeshare for roaches. He turned it around, cleaning it up and filling it to the rafters with artifacts ranging from real antiques to tchotchkes from Ikea. Now an artist by the name of Ira Gagon lives in the hotel, painting original designs on doors and elevators. “The Fig,” as it is called, is far from being a luxury hotel and Uno makes no pretense about that. But it is clean, has decent beds and karma that ranges from tantric chant to Carmen Miranda. I love the place, as do most of its reviewers. Thimansson replies to every review on Trip Adviser and he is not afraid to rip anyone who he thinks has been unfair, including a woman whom he said threatened him with a bad review if she didn’t get a discount. “Next time Motel 6 will leave the door open for you,” he wrote. 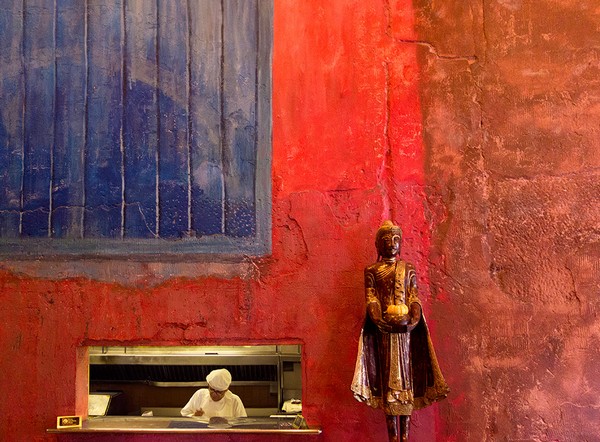 Breakfast here is cheap and basic. Breakfast a block away at The Original Pantry is cheap and over-the top. This LA icon has never closed, not during The Great Depression, not for an hour since Dewey Logan, a dishwasher from Denver, opened it in 1924. It seats only 84, but cooks here crack more that 2,400 egg a day. I order the three slices of French Toast. I can handle that, just three slices. What arrives is a plate covered with six half-slices of sourdough, each almost the size of a Steven King paperback. I can’t finish this I say aloud to my wife. But they are so light and fluffy, murmurs my inner voice. I betcha Marilyn Monroe had these when she dined here. Maybe even Bill Clinton in his butterball days. I accept that self-delusion and devour the works, with bacon. Part of the entertainment here is watching waiters clear tables. These old pros, some of whom have worked at The Pantry for decades, can balance six servings of dirty dishes on one arm. 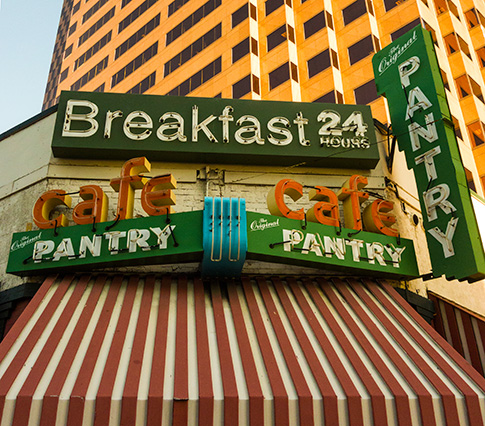 Nighttime, near the same corner, we stalk supper and are accosted by three men in white chef’s uniforms, one rather portly with an uncanny resemblance to Chef Boyardee. “Free glassa Prosecco!” shouts one with a thick Italian accent, “new ristorante, grand opening!” We look across the street and eye the place.

“No, its “Casa Nostra.” My wife gently corrects me.

Looks decent. We walk in and are greeted by the owner. Casa Nostra is a comfey, modern establishment with real Italian waiters who hover like, well, helicopters who have pinned down their quarry. Across the aisle sits an edgy-looking young woman with a short I-mean-business hairdo taking notes and snapping pictures with her iPhone. Two tables down, a man speaks to the owner while keying comments into his mobile. Food bloggers, probably eating for free. How do I get in on that racket?

Casa Nostra, already a popular, well-rated restaurant in posh Pacific Palisades is placing its bets on the revived Downtown LA by opening here. We sample two pasta dishes, as good as we have had anywhere, including Italy.

But it is certainly not the only newcomer. Downtown has become another outpost of Wolfgang Puck’s empire. Chef John Rivera Sedlar, called by Gourmet “the father of modern Southwest cuisine,” dishes up good Latin fusion and bespoke cocktails from his Rivera eatery nearby in an on-the-mend neighborhood called South Park. I sampled a “blood sugar sex magic,” a boozy take on the Red Hot Chili Peppers album. It is a blend of rye whiskey, agave nectar, basil and red bell pepper. Bottoms Arriba!

The LA-Live complex, Staples Center and Nokia Theater draw the masses to concerts and Lakers and Clippers basketball games. Last night we watched what looked like a conga line from Star Wars queued up to see and hear the antics of Marilyn Manson: a Willy Wonka lookalike, a woman with leather pants hanging thigh-level, sporting her bottomside cleavage, and a band of fleshy-teenage girls bonded in tight dresses by some sort of string, looking like deli salamis. There appears to be something for everybody in Downtown LA.

Back at our nightly hangout next to the pool at The Fig we lift our glasses to a revival of a neighborhood that in the 70s, when I had an apartment in LA, I would have never dreamed of venturing into at night. Downtown Los Angeles has made a remarkable transformation. It is Sunday night and there is not a helicopter to be heard. 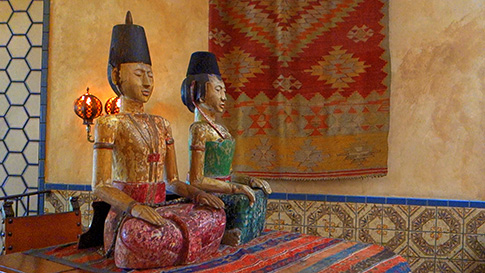