Herbert Hoover in Atlantis: Mt. Shasta Inside and Out 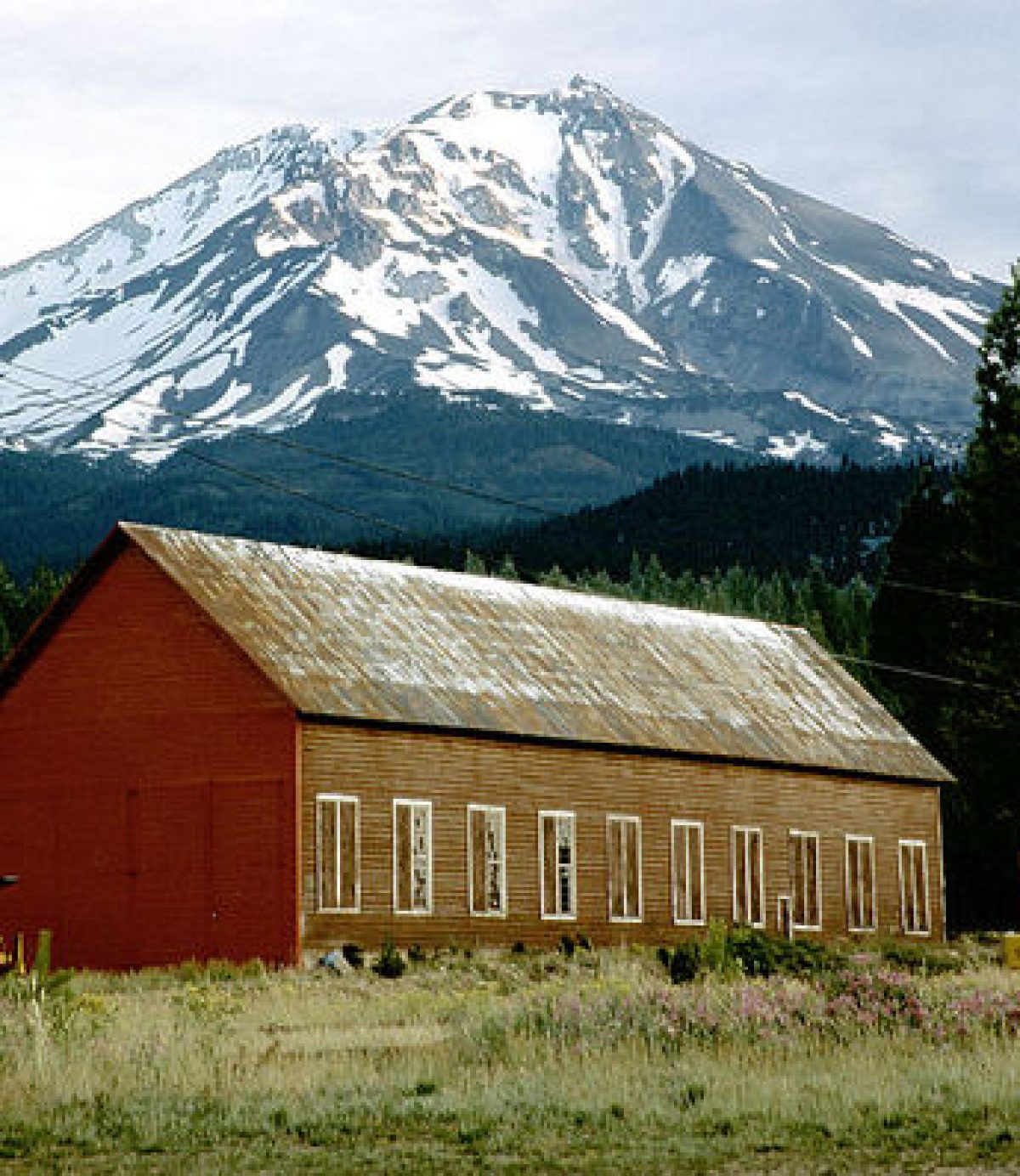 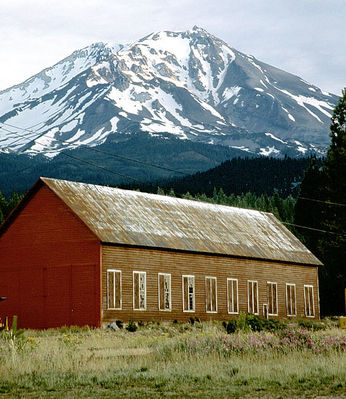 Why do the gods always live on or in mountains while the trolls, barrators, falsifiers and other pointy-tailed deadbeats dwell in the muck beneath the bridges? (As an occasional glutton, I stand just a foul breath’s distance from the status of troll in Dante’s scheme.) Why do the ordinary people scramble in chaos around the friezes at the bottoms of temples while the enlightened ones quietly meditate at the top?

High places have always been magnets for seekers, scientists, lunatics and people like me (a bit of all of the above), who are intrigued by their unseen possibilities and awed by their beauty. William Randolph Hearst fancied California’s Mt. Shasta and built a Bavarian-style villa here he named Wyntoon (his paramour Marion Davies called it “Spittoon”). Fearing that the Japanese might bomb San Simeon, Wyntoon became the Hearst hideout during WWII. Shasta was also a retreat for Jean Harlow and Herbert Hoover, but not together.

Locals complain about the death of the timber industry and about newcomers who have driven up the cost of housing in tiny towns like Weed, Shasta City, Dunsmuir and McCloud. The immigrants — including fallouts from Silicon Valley — lock their cars and houses when they leave them, a ritual unheard of around these parts. It is still possible to buy a house here for less than US$75 thousand but prices are rising. 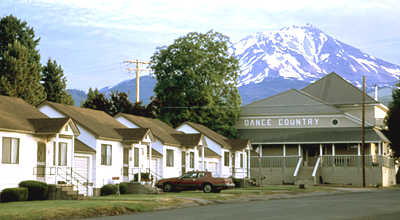 What you would get in a place like McCloud is a tiny 1920s-style Monopoly board bungalow, former employee housing for the McCloud Lumber Company (Mother McCloud, it was called) which owned the town and everything in it from the from the late 1800s until the 1960s. Economics kept McCloud frozen in tatty charm. Its boardwalks are nostalgic strolls and its turn of last century buildings have been restored into B&Bs, restaurants and shops. There is plenty of entertainment here: a dance hall with a bingo parlor across the street and if that isn’t enough, a railroad yard full of rusty old Pullmans and stray cats where you can whistle and play “kick-the-can”.

“Where ya from?” was the predictable question from the conductor beckoning me aboard McCloud’s Shasta Dinner Train. I answered and he showered me with encyclopedic knowledge of European railroads, Chinese railroads and the tiny spur that once passed though my own home town. Railroad buffs will find plenty to stoke their boilers here with two steam engines making regular runs, the Shasta Dinner Train and the Blue Goose out of Yreka. Lumber towns and railroad towns have now become tourist towns, and that might be a good thing.

Joanne Steele, who runs the Siskiyou County Visitors’ Bureau, has been trying to herd small town citizens and businesses in the direction of sustainable tourism as a way to revive economies that once depended on logging. It is a tough sell, says Steele, who has been organizing town meetings throughout the region, trying to convince folks that their unique environment and heritage, nurtured by local people and businesses, can provide better jobs and quality of life than what is promised by fast food joints and other corporate bashers of local culture eager to plant their garish signs here.

The town of Montague is a twangy stanza out of a cowboy poem. It was once a whistle stop, a short toot on the California-Oregon railroad line, but now stands like an abandoned Western movie set. As I set up my tripod and begin to photograph its Main and only street, a man tears out of a bar and shouts “Hey, whatcha doin’?”

“Cool, dude.” he says as he returns to his stool.

Steele said she would like to see a movie company come in, remodel Montague and help its residents place it on the travelers’ map. 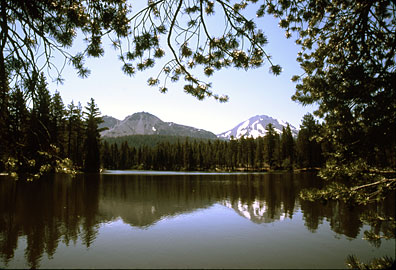 Most people don’t come to Shasta for small town charm, however, but for its awe-inspiring natural setting: trout filled streams, clear mountain lakes, stands of Ponderosa pine, elk and eagle. 14,162 ft. Mt. Shasta, one of the southernmost volcanoes of the Cascade Range, is topped by ice and snow most of the year and provides the innerspring for five glaciers. It takes about two days to climb and is not an easy stroll. Weather can change almost instantly and otherworldly cloud formations called “waves of ascension” can cut visibility to zero. No wonder the Shastans, the Achumawi, the Atsugewi, the Wintu, and the Modoc tribes who lived at its base assigned it spirits. No wonder Shasta, today, is Jerusalem for the weird.

Channelers, astrologers and shops that sell healing crystals, tarot cards, wands and other spiritual needs are as common as 7-Elevens. They’ll sell you maps plotting Shasta’s lines of energy, vortexes and other places with spirits and forces that one does not find in Anaheim or the Bronx.

There is a bit of an argument about who lives inside this mountain: Could it be the Lemurians, transplants from a lost continent over which lemurs traveled between Madagascar and India? Some say Lemuria and Atlantis in the same breath and believe the “wisdom of the ages” is here, hidden in jeweled chambers guarded by “white magicians.”

Others think there is a fifth-dimensional city and space pad in the mountain called Telos, which could be another name for Lemuria or Atlantis, but there is some liturgical debate here. Believers have built “interdimensional gateways” of copper tubing and crystals that they use to communicate with the Telosians, who some argue are native Calfornians, not carpetbaggers from Asia.

There is still a sizable community here of followers of the Ascended Masters. Guy Ballard, a small time stock hustler, claims to have met Ascended Master Saint Germain while wandering on Shasta in the early `30s. (Saint Germain was an 18th Century Portuguese alchemist who claimed to be 2,000 years old). Ballard also said he shook hands with Jesus, who along with Lord Buddha and George Washington were also deemed Ascended Masters (Bush and Cheney have recently shown up on followers’ web sites). Ballard’s writings became the basis of the “I AM” sect, a bouillabaisse of Christianity and metaphysics. He claimed to have the power to cure diseases, which he marketed aggressively. He, his wife and son were indicted on mail fraud charges and went to trial in a splashy media feast, which flew back and forth between the appellate courts and the US Supremes even after he died. The justices, in a landmark ruling, said that determining the truth of religious beliefs was none of their business. This didn’t mean that the Ballards weren’t crooks, however. They lost.

A serious search for extraterrestrials comes in the form of whooshing sounds and sputters at Hat Creek. The SETI Institute, which has networked thousands of personal computers to analyze noises sucked from space by radio telescopes for evidence of life has joined with the University of California at Berkeley Radio Astronomy Lab to construct the Allen Telescope Array. It is named after Microsoft founder Paul Allen, who has contributed about as many dollars to fund it as there are visible stars. If all goes according to plan, this cluster of some 350 radio telescopes will be shared by UC astronomers and SETI monitors sniffing for pops, peeps and extraterrestrial cell phone calls. Perhaps SETI will find something “out there”. Maybe all they have to do is re-aim their dishes toward Mt. Shasta where they will undoubtedly hear Lemurians or Telosians guffawing, doing armpit farts or whatever Lemurians or Telosians do, at the thought of such primitive science.