MoMath in Manhattan: My Life With Pi and Other Math Mysteries 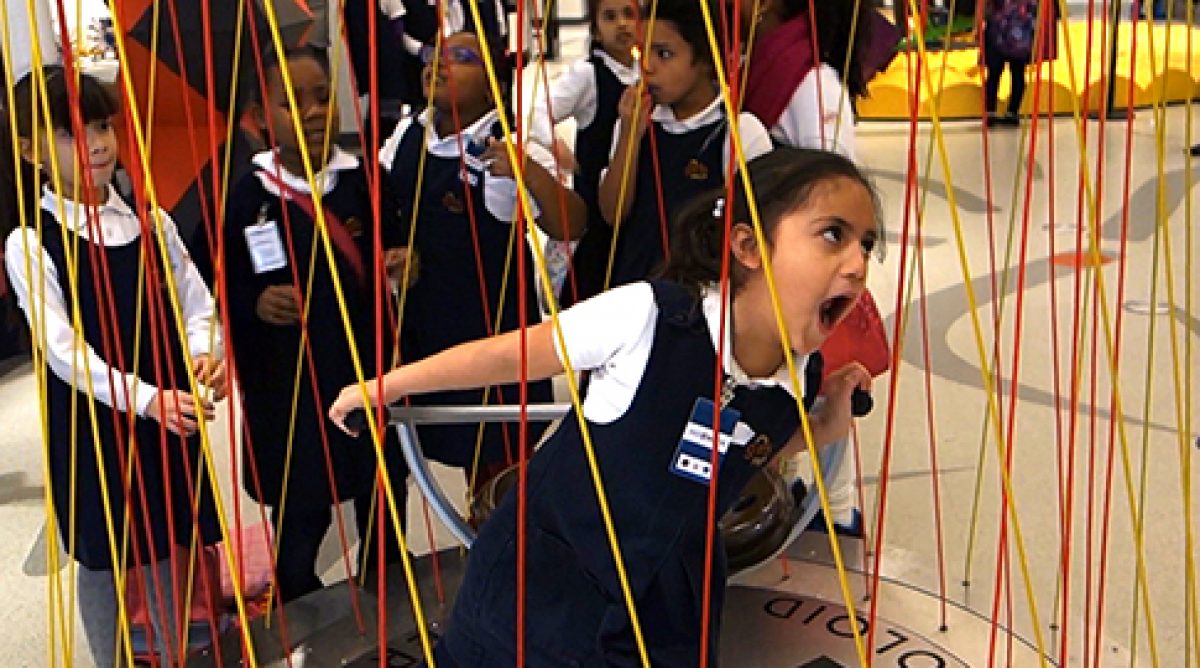 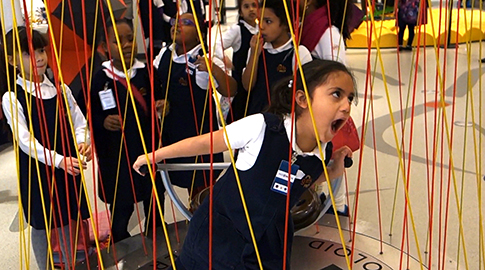 Be not afraid my children. We lead you safely through a world of a Pi where there are no shipwrecks or tigers, the Museum of Mathematics in New York City.
My daughter scares the daylights out of me. Normally she is bright and seemingly innocent, but sometimes she slips over to the Dark Side, babbling in tongues, scratching alien cuneiform on a blackboard, as she did for me once in a conference room at Cal Tech.

You see, she is a mathematician.

For years she sent me picture books – 21st Century versions of “Our Friend The Atom” – that tried to unravel for me the mysteries of math, the strands of string theory, attempting to advance me to a point just shy of a mastery of long division. So far, no good. 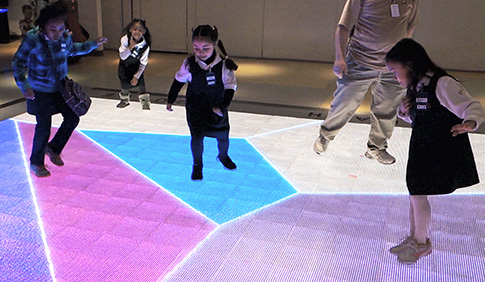 Now I find myself in a mob of giggling kids at the Museum of Mathematics in New York City. We are hopping, jumping and skipping, making Voronoi Cells in a Voronoi Pattern in vivid colors on the floor. Georgy Voronoi, a 19th Century Ukrainian mathematician would have called me a seed (or whatever that is in Ukrainian), defined as a point of an area or cell whose edges are closer to me than any one of those any of the rest of other little seeds, uh, rugrats. See how hard this is to explain? This is actually a common mathematical model used, for example, to correlate the sources of infections in epidemics and gather data for provisioning wireless networks.

And that is what MoMath, as it is called, is all about, trying to make the dreaded math approachable and fun for children and phobics like me. It is the brainchild of Glen Whitney, a math professor turned Wall Street quant, or hedge fund algorithms manager. Whitney raised $23 million to bankroll the museum, which opened its doors last fall.

MoMath is a two-story, 30-exhibit exploration of the true but seemingly improbable:

A Coaster Roller on which visitors propel themselves in a wagon over multicolored acorns that behave as if they were round. Acorns have a constant width, just as spheres do.

The Enigma Café may look like a regular cafe, but is filled with puzzles.

A camera that will subdivide your body into fractals. Ouch!

Kiosks describe each exhibit on three levels of understanding: basic, intermediate and graduate school. And herein lies the museum’s major fault. This may be fun, but to know what is going on, you really have to read about it and unless a parent or teacher is a good ‘splainer, to a child this might be considered just a weird jungle gym. At least it gets across the point that math should not be feared, unless, like me, you have been taught otherwise. Remember the New Math?

MoMath does have a school education program and a series of lectures. Topics have included “The Patterns of Juggling” and “Morsels from The Simpsons and Futurama.” For those of you in search a dark thriller, there was also “The Topology of Twisted Toroids.” Some of these “Math Encounters” are available online.

You can’t take three from two,
Two is less than three,
So you look at the four in the tens place.
Now that’s really four tens,
So you make it three tens,
Regroup, and you change a ten to ten ones,
And you add them to the two and get twelve,
And you take away three, that’s nine.
Is that clear?”