Back in Bodega, I am, the little California town that was the object of winged terror in Alfred Hitchcock’s The Birds.

I have photographed St. Theresa of Avila, the church featured in The Birds many times, once for the Redwood Empire Association, which also once employed Ansel Adams. Not much has changed since Adams captured it in 1953. 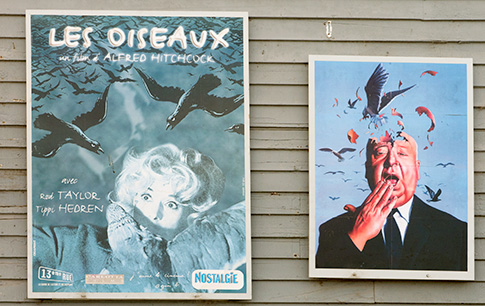 Bodega, for the sake of the movie, was mashed up with Bodega Bay, a fishing town a few miles away on the coast, which was ravaged by seagulls and, some would say, still is. I lived there briefly in the 80s and remember renting “The Birds” on a terrifying night when the wind howled off of the ocean and rain pummeled my house.

Behind the church you can see the Potter Schoolhouse from which children ran screaming, pursued by a murder of crows. 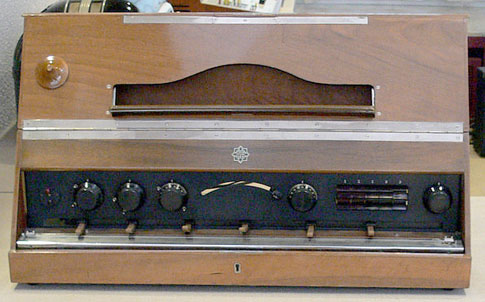 Hitchcock was said to have been inspired by a massive onslaught of seabirds that flung themselves at houses near Monterey, California kamikaze-style in 1961. It was discovered later that the birds were basically nuts, having noshed on squid and anchovies infected by a toxic algae.

Hitchcock was a Catholic and worshiped at St. Theresa’s during filming. The church was built in 1859 by New England shipbuilders when Irish and Italian immigrants swarmed into the area, many taking up dairy farming. The surrounding hills are still speckled with cattle, but with few family farms, the town now mostly markets quaintness. It main businesses are antique/junk shops. The quintessential local saloon, in the middle of town, is marked with a peeling sign that says Casino. It is not a casino, however, but a bar and grill that that, despite its appearance, has earned a great reputation for food and as place to mingle with town characters…and there are those. 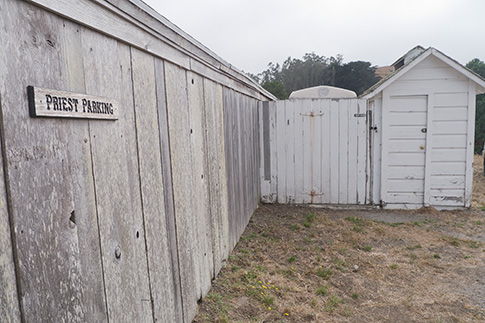 St. Theresa’s is a California Historical Landmark and has been restored several times. Everything except…the plumbing. Parishioners must make use of outside conveniences should The Lord or something else move them.