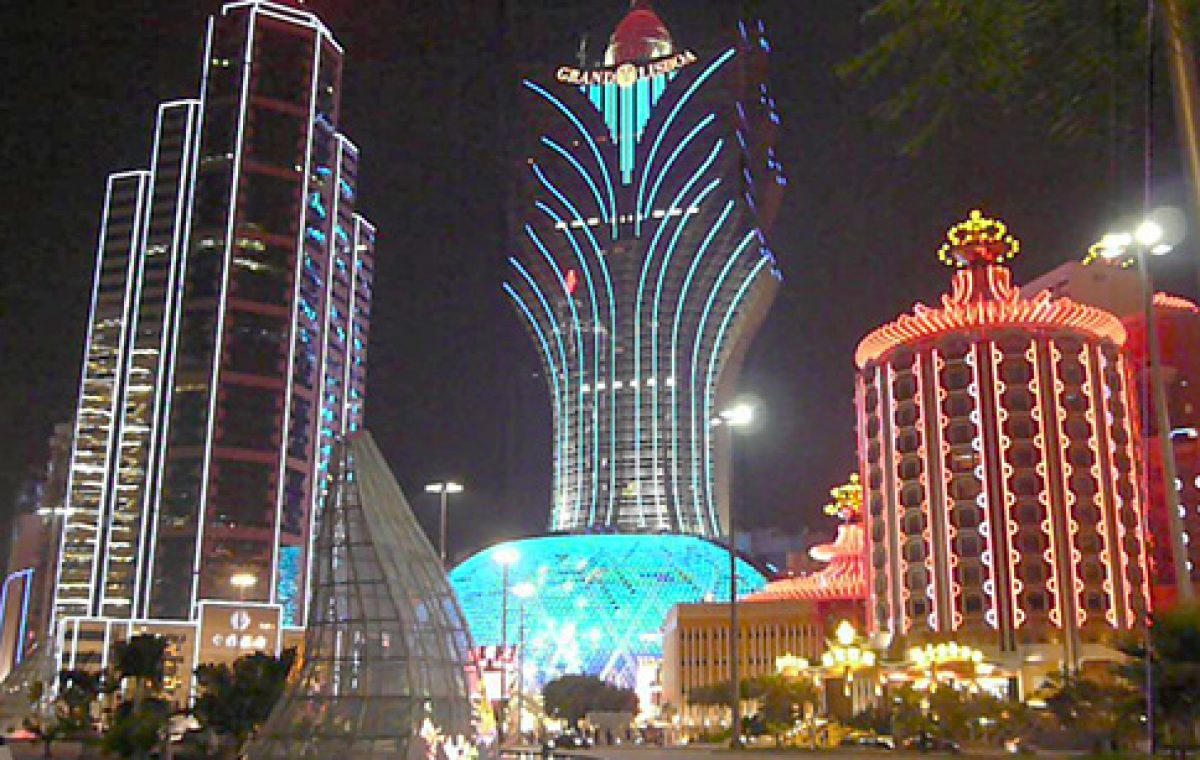 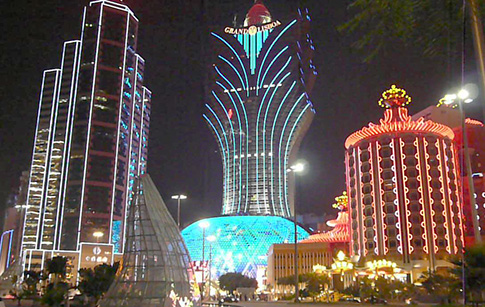 I had a dream that the Grand Lisboa tower, a hotel-casino that now dominates the skyline of Macau, came alive one night, pulled itself from its mooring, marched across China’s Pearl River Delta and, like Godzilla, tossed trolley cars around Hong Kong.

I think about my week in Macau last year as I walk the strip in Las Vegas, past rubble-strewn lots that look like some lizard of mass destruction had just swung through. Past construction cranes that have not moved an inch since my last visit a year ago. Past women stuffed in short tight skirts like shrimp in sushi rolls, alone or in pairs, peering at their mobiles. This is not the Las Vegas of the mid-century when Mo Dalitz and his pals ruled and in the words of a longtime restaurateur, “knew how to take care of people.” This is not the Vegas of the 90s when the Steve Winns and corporate poobahs built palaces and faux New Yorks and Venices and “family values” was the motto. This is the Now Las Vegas: down and a bit dirtier, but not out. 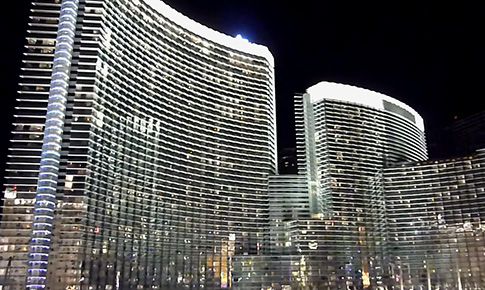 I always look forward to my yearly jaunt to Las Vegas for the Consumer Electronics Show just to see what gob-smacking new extravagance flashed on its skyline. This year, didn’t disappoint, even though the new City Center may be the last of its breed for awhile. This $11 billion dollar complex, purported to be the largest privately-financed development in the US, barely escaped the economic woes of its partners, Dubai World and MGM Mirage, and opened in December. But trying to fill a 4,000-room hotel, two 400-room boutique hotels and sell scads of condos, designer purses and aged filet mignons in today’s economy might prove to be a trick worthy of David Blaine. A local friend tells me that The Strip almost goes dark to save electricity some weeks when there is no big event in town. Where a few years ago our rooms during CES cost $380 a night, this year we booked decent ones off The Strip for $49.

City Center and its Aria Hotel and Casino are quite stunning from the outside, elegant swirls of steel and glass with counterpoints that look like a science experiment in crystal growing. I love some of the art, like the “Halo” water sculpture in the Crystals shopping complex, designed by Los Angeles-based WET, the same people who did the dancing fountains at Bellagio. People work themselves into a frenzy trying to control whirlpools and water vortexes with hand motions, even though I am told that the sculptures aren’t the least bit interactive, just motors and pumps that speed up, slow down and reverse themselves. The Aria’s interior, however, is standard casino-style…claustrophobic and noisy. I don’t know if they were designed that way to get customers hyped up to place their bets or if it is simply tradition. My wife and I were challenged to find a restaurant where we could hear each other talk. We settled for a Thai place called Lemongrass, which was quite good if a bit noisy.

So, where has all the money gone? Where did the Las Vegas cigars hedge their bets? Long before the economic meltdown, they hopped a fast boat to China and, in 2004, started to rebuild Las Vegas in Macau, sometimes beam by beam, ballroom by ballroom. The Venetian Macau, the grand knockoff of the one in Las Vegas, is the fourth largest building in the world. The Wynn Macau was a direct copy of the Las Vegas version down to the parking garage, which was said to have had more parking spaces than there were cars in the entire country. They corrected that folly by tearing the garage down and constructing a tower and casino in its place.

When I first visited Macau some 25 years ago it was a grimy Graham Greene sort of a place. Its only attractions were some decaying colonial buildings and a tatty old hotel-casino called the Lisboa, shaped like an oatmeal box, with a lobby full of hookers and a casino teeming with serious gamblers huffing cigarettes and hacking. I stayed there and was constantly interrupted by calls from women offering room service. 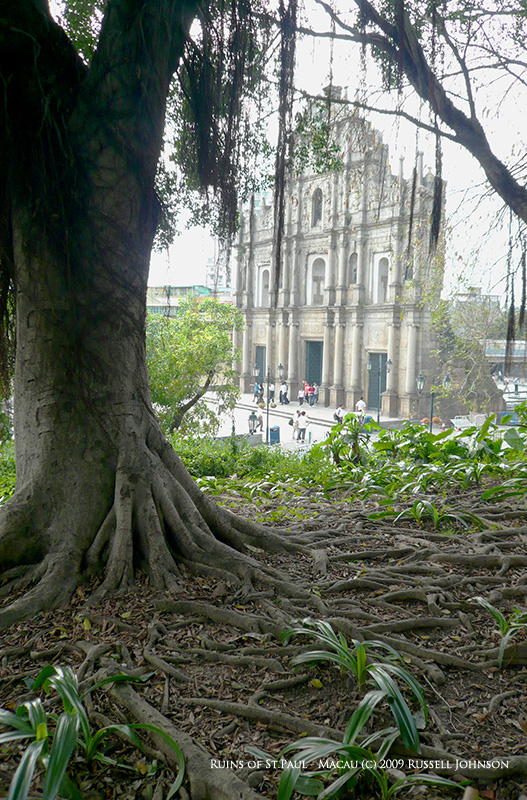 A friend, the late Robertson Collins, a world-renowned heritage preservationist, suggested that I take the short ferry ride from Hong Kong and have a look as there were plans in the works to restore Macau’s colonial architecture. Over the years I watched that happen. Buildings with crumbling facades were shored up and repainted in Portuguese pinks, yellows and tans to complement Chinese reds. Streets were repaved in the kind of swirly tile work you find in Lisbon or Rio. I saw a museum go up, with state-of-the-art interpretations of Macau’s history, European and Chinese. It was clear that the Portuguese wanted to leave their mark before they turned the colony over to China in 1999. And they did.

But heritage is not and will never be Macau’s chief attraction. The Chinese have always salivated over Macau, which until 1999 was off limits. Once, in the 90s, I stood atop Penha Hill, which has a cathedral that dates back to 1622, and watched an odd fireworks display offshore. What looked like a salvo of flashing cherry bombs was actually a boat loaded to the wales with Chinese tourists taking flash pictures of the forbidden Macau. But the floodgates opened after China took over and broke a 39 year old gambling monopoly, letting Las Vegas interests: Sands, Wynn and a partnership between MGM Mirage and Pansy Ho, daughter of Stanley Ho (he who held that monopoly for so many years) into the party. Vegas shock, awe and showmanship hasn’t exactly worked, however. Even though menus have adjusted (I sampled goose feet at the Wynn, which I am sure is not in the menu in Vegas), Las Vegas culture was far cry from Chinese culture. The Chinese came to gamble, period, and didn’t give a toss about luxury amenities, even shunned Cirque de Soleil. I asked an executive from Macau’s world-renowned tourism school if crowds of gamblers were impacting the island’s heritage site. She said, not much. The gamblers deplane or de-ferry and go right to the tables, mostly baccarat tables. Poker wasn’t introduced until 2007.

But the local arm of the news agency Lusa reports that gaming revenues rose 48% last year as legions of serious gamblers arrived. I flew from Taiwan nonstop to Macau’s small international airport in a plane packed with gamers. There is a boom in new ferry services from Hong Kong to Macau. For a time you had to book for very early in the morning to get a seat.

That said, I am not a gambler but I liked Macau when I first visited and now, like Las Vegas, always look forward to going back to see what new extravagance lights up the skyline, knowing that within walking distance from “East Las Vegas” there is still a square that still looks like old Portugal, where you have a cup of tea or a bowl of soup and hear the chatter of both Chinese and Portuguese voices. And you can still dine on European or Chinese fare, as I did, on chicken spiced with the flavor of Portuguese Africa and on a new take on the traditional bacalao Macau is famous for, a seared cod filet to rival any version done with tuna. And the old Lisboa, the oatmeal box , is still there with its smoke-filled casino and fancy ladies, now confined to the bottom floor, and right next door is its successor, the Grand Lisboa tower, a symbol of the new Macau, rising like Godzilla ready to pounce.

Macau will evolve, maybe toward the entertainment center its Las Vegas investors would like to see. Las Vegas will surely reinvent itself too, as it has so many times. Who knows, maybe jumbo jets filled with Chinese gamblers will descend on the desert and goose feet will appear on the menu. Let me see, how many carbon credits will that cost?