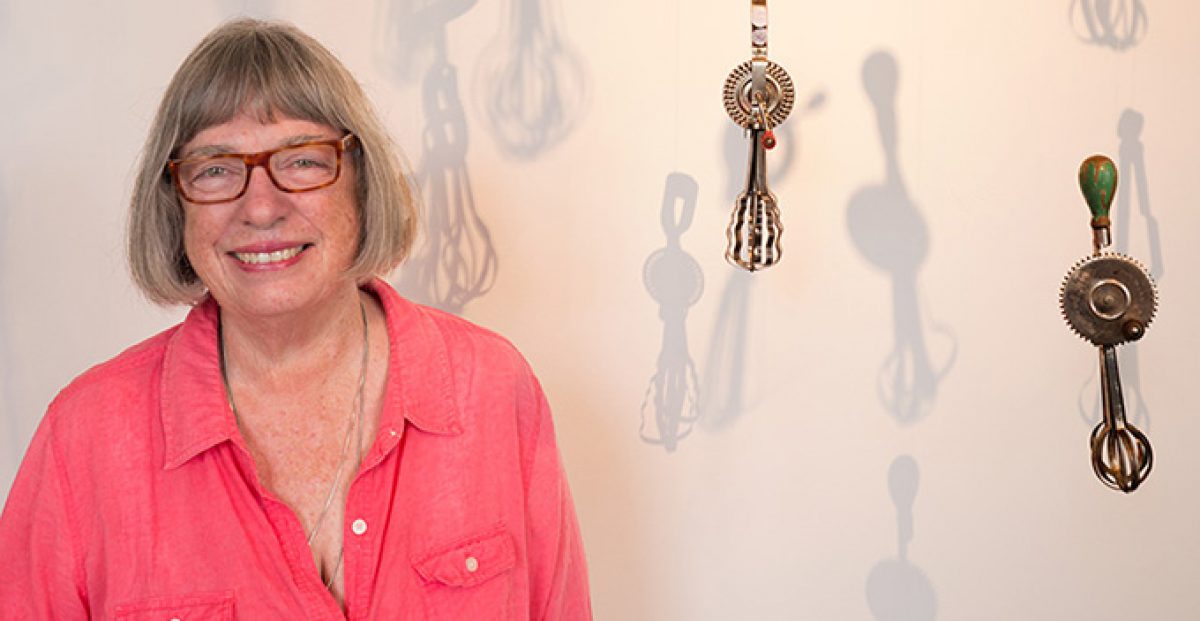 My father held me up to the refrigerator and pointed to the letters.

“Fri-gid-aire,” He sounded it out.

It was my first multi-syllable word. My father took guests into the kitchen to demonstrate how highly-advanced I was.

We all have memories of the kitchen. Licking dough off of a spoon. The first time you were allowed to handle a knife.

Food writer Kathleen Thompson Hill has been collecting kitchen gizmos since the 1980s. They range from a 1790s citrus squeezer to a modern green plastic model shaped like a frog. In between is an enormous variety of choppers, squeezers, beaters, grinders, pulverizers, toasters and other devices designed to torture our foods into edible form.

“Kitchen Memories: The Kathleen Thompson Hill Culinary Collection” features a large sampling of her vast collection. I asked Kathleen if she could be considered a hoarder, to which she replied, “Hoarders don’t catalog.”

Opening night I wandered about with my camera listening to the comments:

“My grandma had one of those.”

There are some devices on a mystery table that invite a guess. One looks like a tiny version of the first atomic bomb.

There was ephemera from the World War II era when food was rationed, including books on frugal cooking .

Toast was originally made using a carriage attached to an iron stick which was held over a fire. The invention of Wonder Bread coincided with the invention of the pop up toaster.

Then, there was the Toast-O-Lator. You put the toast in one end and it bounced its way over a bed of cogs and gears and came out the other end. The bouncing ensured that the bread toasted evenly.  But the Toast-O-Lator didn’t exactly experience a sales bounce when it was introduced in 1948 and, after one year, it…was toast. 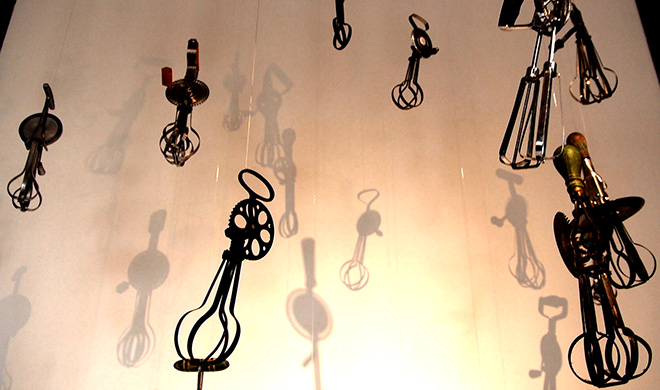 The egg beater, of which she displays dozens in a Calder-like mobile, revolutionized the way deserts were made. Fluffy deserts were once the pleasure of people with servants who labored with whisks. The eggbeater changed that, allowing everywoman to whip up frothy souffles and such.

Hill charts the evolution of food processing from the sticks and stones of the cave-dwellers to the mortar and pestle, to knives and choppers, to food processors, such as the Cuisinart, then back to knives and mashers.

Kitchen Memories: The Kathleen Thompson Hill Culinary Collection is shown along with: 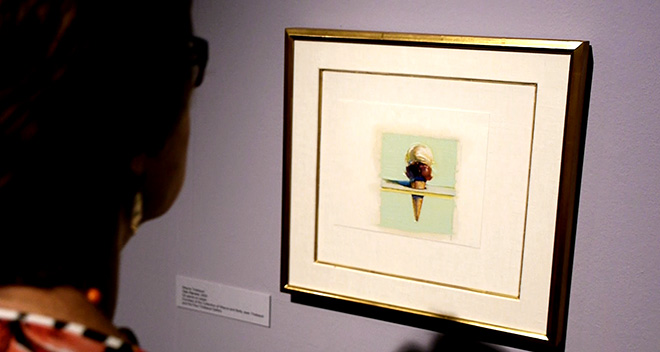 Delicious Images: Art About Food
The Drawings of Wayne Thiebaud and Joseph Goldyne