Morocco: Slavers Bay and a Bit of Bollywood 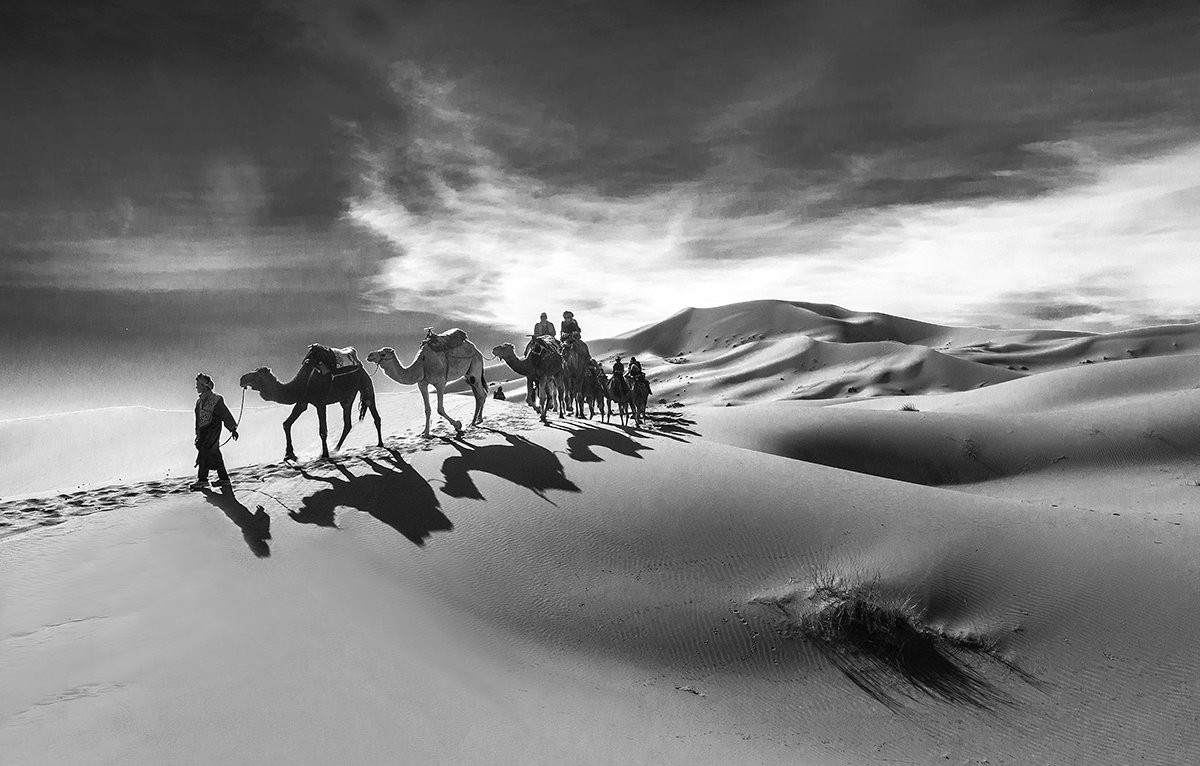 No, it is not Sodom or Gomorrah, or Tibet or Slavers’s Bay in Game of Thrones. Morocco is, rather, all of the above: one big film set that producers dress up to stretch their imaginations and ours. Oh yes, there is also a a bit of Bollywood thrown into the mix:  Delhi in the desert.

Casablanca, I grumble. As a movie buff I am disappointed.

Casablanca does have an interesting yet not so exotic medina and a modern mosque that is a wonder of Islamic architecture, if not the world’s, but it does not speak the romance and intrigue of Rick’s Café Américain in its namesake movie. Casablanca is a big, modern city.

But head south, cross the Atlas Mountains, and you are in Africa’s Tinseltown. Look in almost any direction and you see a scene from a movie. David Lean discovered that when he was scouting for locations for  Lawrence of Arabia in 1961 and so did dozens of other top directors. 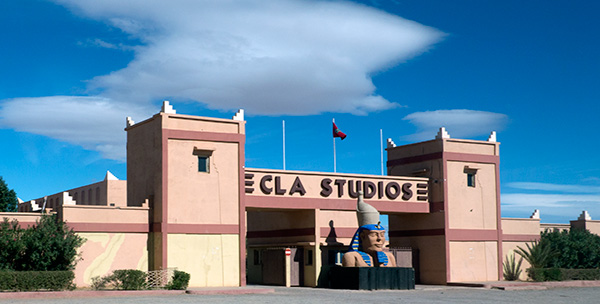 Driving through the town of Ouarzazate I see B-movie sphynxes guarding the gates of studios that provide support for visiting film companies. Atlas Studios, the largest lot in the world, displays props and sets from memorable films including the F16 jet that was used in Jewel of the Nile and a Tibetan-style monastery from Kundun. A castle-like kasbah on top of a mountain here houses a film school. 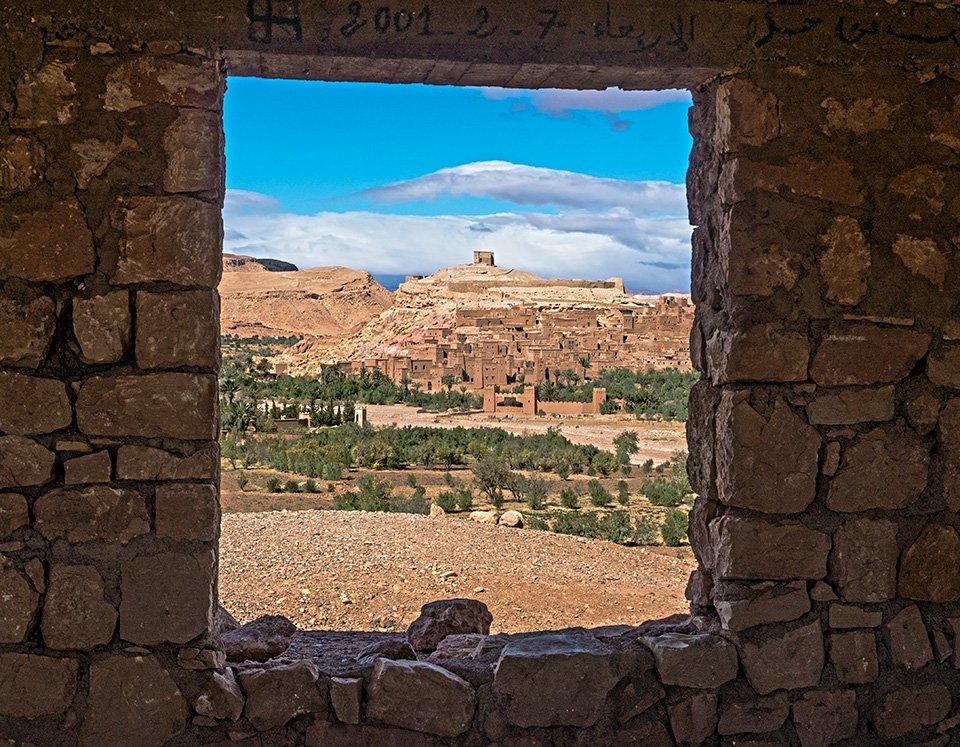 Lean discovered Ait-Ben-Haddou, a fortress of earthen buildings on an ancient caravan route. He began the task of restoring it and in 1987 UNESCO designated it a  World Heritage Site. Portions of it are in good shape – a few families live here – but others look like the ramparts of ancient castles melting into the earth. Ait-Ben-Haddou was a  camel-stop on the Sahara Trade Route that stretched through the Middle East and Africa to the Atlantic and south to Timbuktu. Caravans carried spices and slaves. In Game of Thrones, it became the slave market of Yunkai the Yellow City. Ait-Ben-Haddou was also the setting for Sodom And Gomorrah, The Man Who Would Be King, Jesus of Nazareth, The Last Temptation of Christ, Kundun, Gladiator, Kingdom of Heaven and many other films. 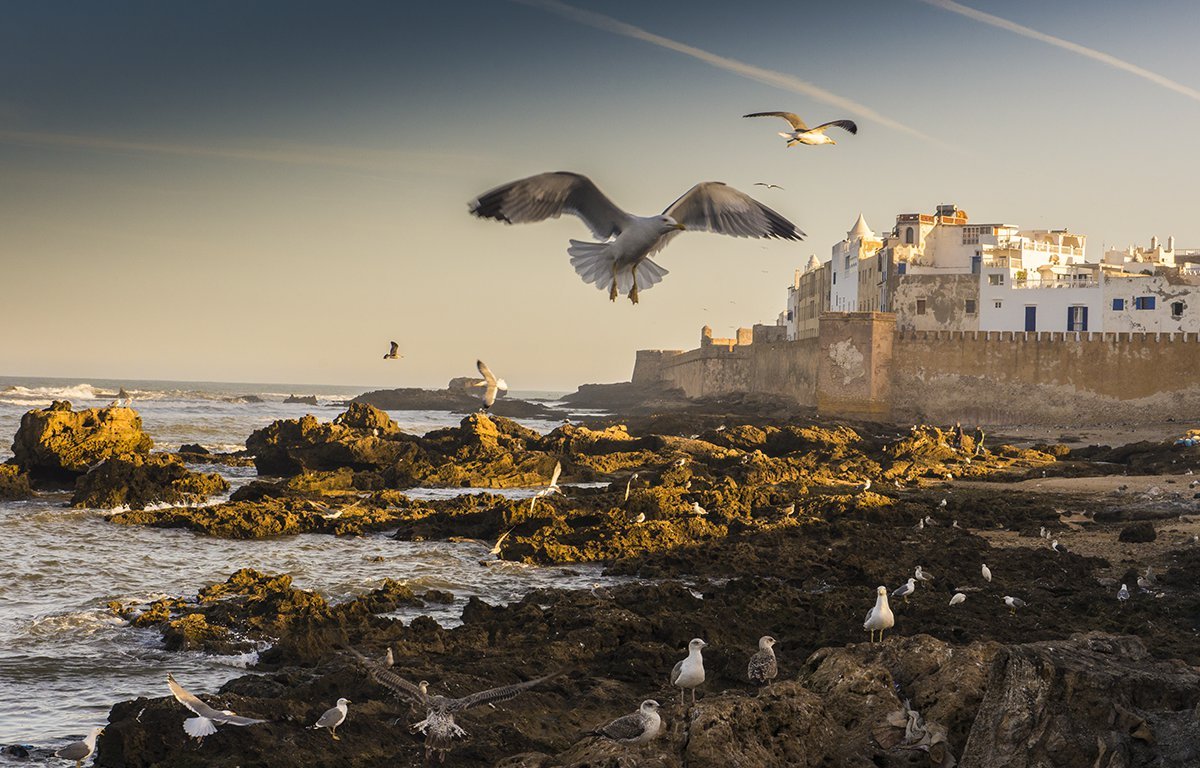 The coastal port of Essaouira was the setting for Astapor Home of the Unsullied and Slaver’s Bay in the the third season of Game of Thrones.

In Body of Lies, Morocco pretended to be Dubai. Film companies use Morocco, a liberal Islamic country, to depict other parts of the Middle East, especially when politics or religion are part of the plot. 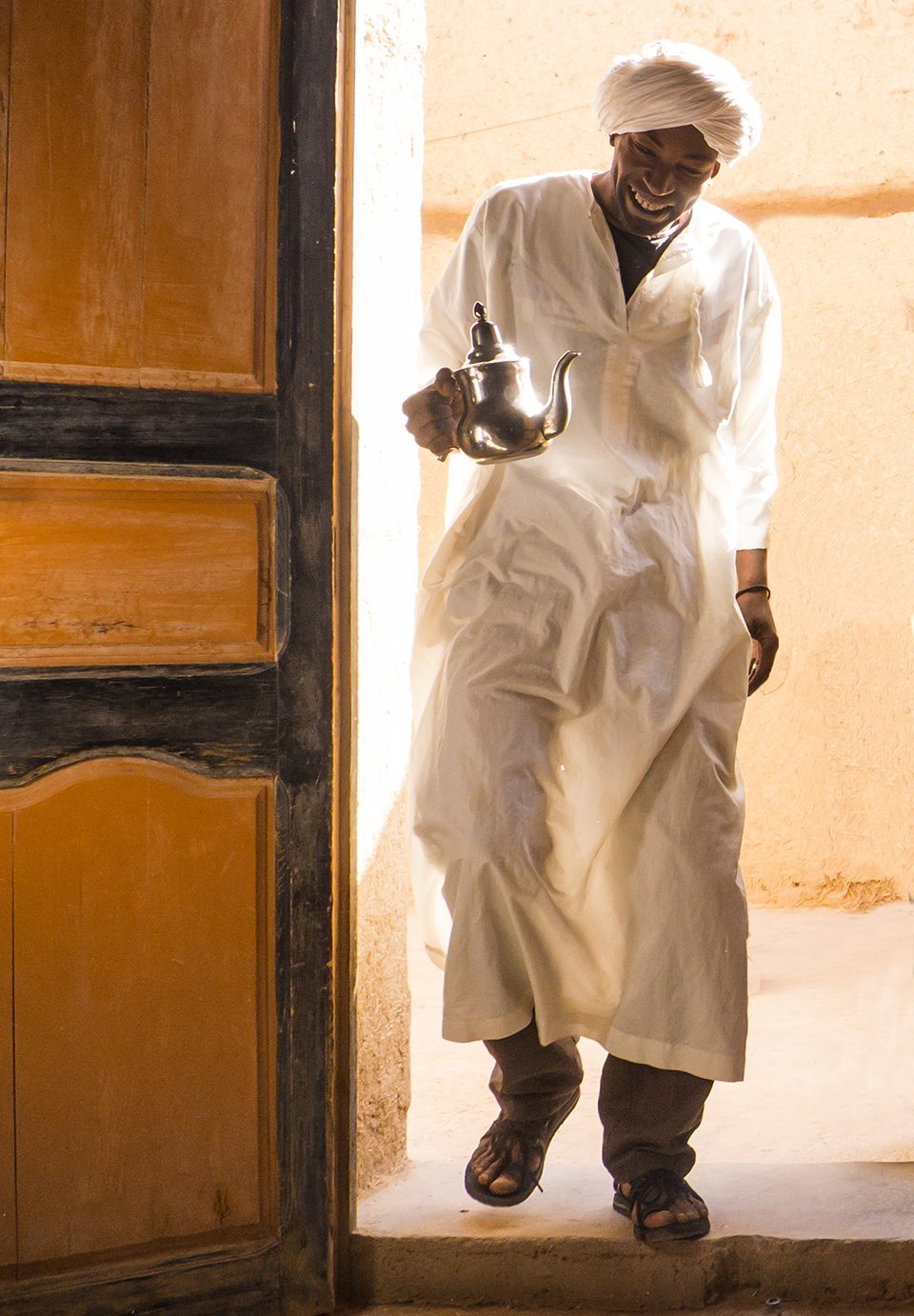 So here I am near Merzouga, the end of the trail, where the Sahara meets the road. After a dusty run across the desert flats in a 4X4, I settle into Riad du Sud , a former farmhouse at the edge of a dune. Wasting no time, I dig out my tablet and huddle around a WiFi hotspot with fellow travelers, battling in byte-to-byte combat for bandwidth on a pokey internet connection, posting scenes of the snowy Atlas mountains we had just crossed. Morocco is wired, big time. Everywhere I stopped, even if the water wasn’t always hot or, in one instance, the sewage backed up, had free internet. I am not so sure that I like carrying my Starbucks habits here to the desert. 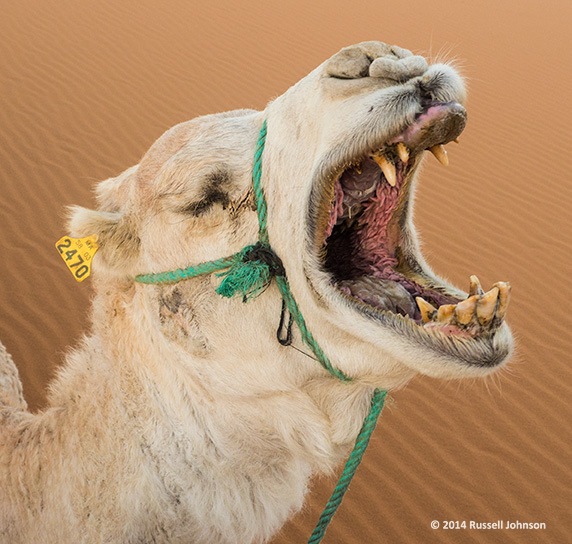 Some say the reward of travel is as much the process as the destination. I am to camp in a tent in the desert under the stars.

That, I am looking forward to.

Getting there on the back of a camel, not so much. Camels come with a certain reputation: testy, noisy and smelly to begin with. Not to mention uncomfortable. Peter O’Toole, while filming Lawrence, created a revolution in camel jockeying when he introduced foam rubber to the saddles. Bedouins nicknamed O’Toole Ab al-‘Isfanjah, “Father of the Sponge.”

I am introduced to my beast, whom I have nicknamed Leroy, after a boy I knew in middle school who had bad breath and, thinking he was entertaining his classmates, made gross noises. (I originally thought about naming him Lexus). Leroy is a dirty white and his maw exhibits a set of teeth that looks like that of a Dickensian chimney sweep. I posted a picture on Facebook and my dentist commented: “Poor thing, it has periodontal disease.”

He grunts, gurgles and whistles.

Leroy kneels and I swing my leg over his hump. He is a one-hump dromedary as opposed to a two-hump bactrian camel, found in Asia. I was wondering how I could sit on top of that thing. But it is pure blubber, stored on top of the animal, not a bag of water as legend has it. Riding a camel requires side to side hip action, which is almost tolerable, as long as the walk is on the flats. But camels can go straight down a dune. Balancing yourself while descending at near 90 degrees awakens muscles and joints that have long been dormant. I grab the horn of the saddle, lean way back and place by other hand on Leroy’s rump. It works, sort of, but I still approach every downhill dune with dread.

There is a gurgling and grunting behind me. A camel has stopped, is stomping his hooves and making a sound that is a cross between a braying jackass and a flushing toilet. Like a congressman who makes similar noises, he refuses to budge. His rider gets off and walks. Come to think of it, I would feel more comfortable walking too, but I won’t. The view from this height is magnificent…worth the pain. 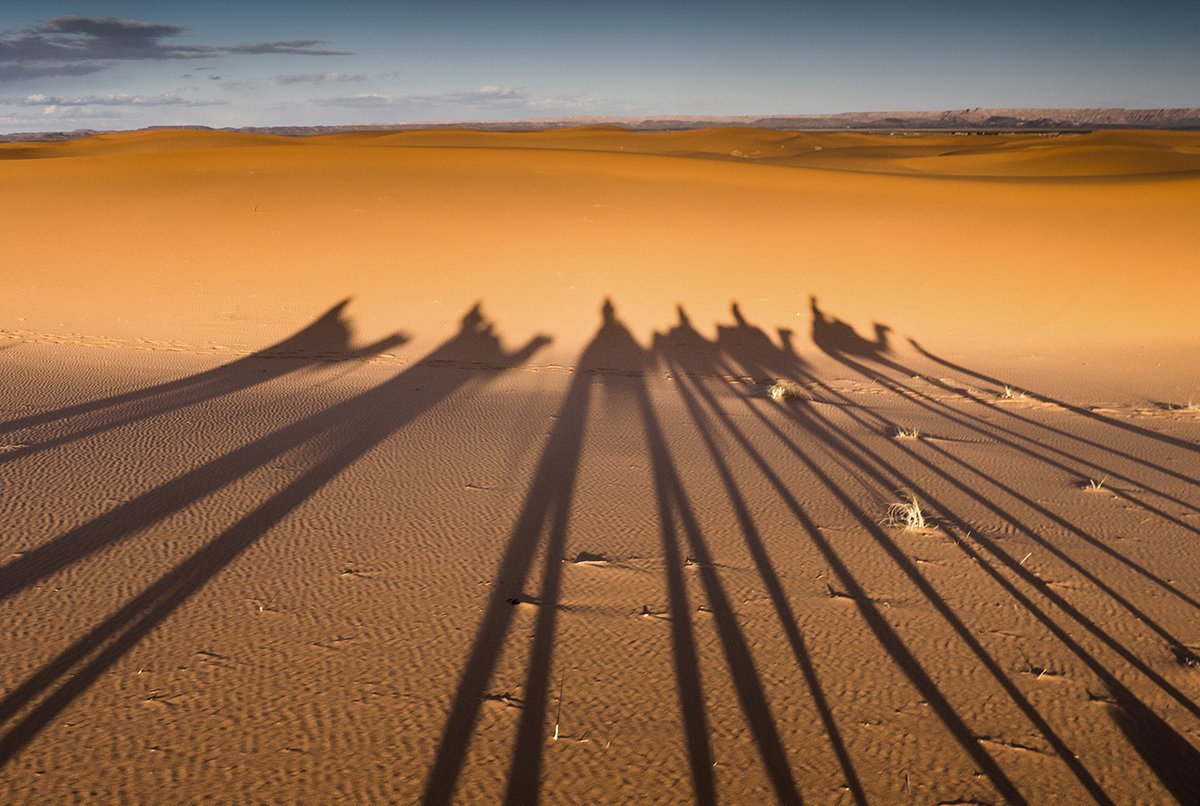 As the sun gets lower, shadows spread across the sand. Leroy’s legs seem 40 feet high. 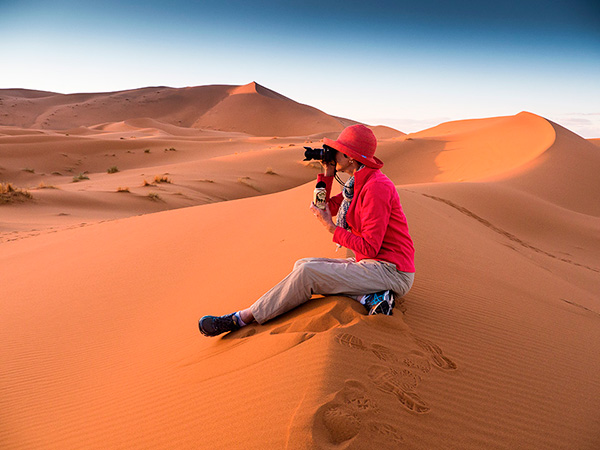 The caravan stops, we all get off. My wife Pat and I grab a can of Kasbah brand beer off of the cooler camel and hike up a sand dune. It is slow going. Our shoes sink into very fine sand. The air is remarkably clear, but then we are in the desert where automobile fumes and industrial pollution don’t tint the sunsets. 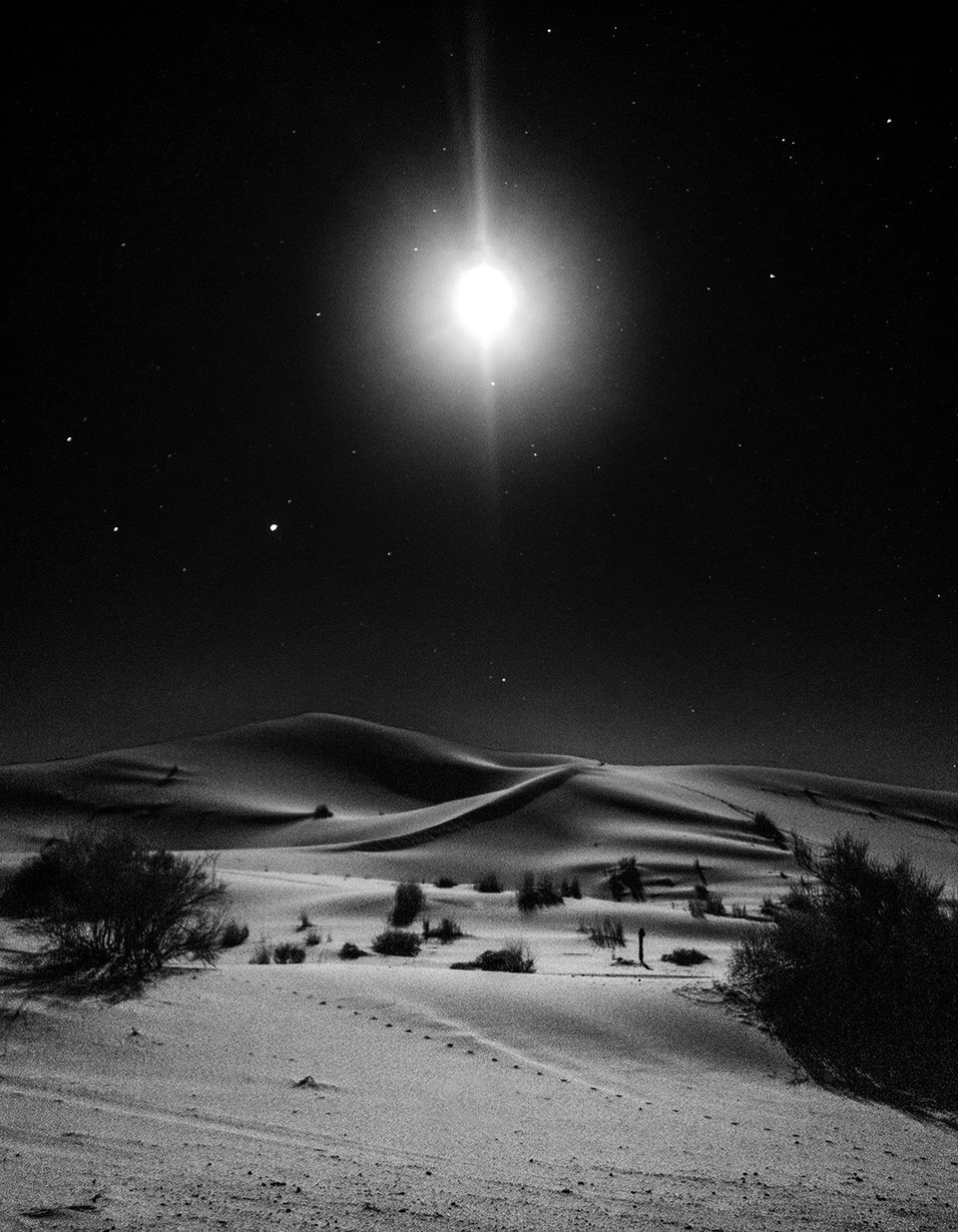 Night in the Sahara © Russell Johnson

The moon begins to rise, we board our beasts and off we head to our camp where we huddle around a campfire, eat Berber bread baked in the ground, and gaze at the stars.

Here is a video slide show

A few days later I learn that the Marrakech Film Festival will open not with a movie filmed in Morocco, but Ram-Leela, a Bollywood version of Romeo and Juliet. I was to find out one of the reasons why. 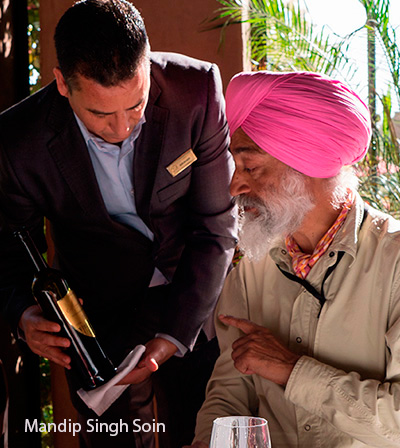 The leader of our group of travelers, my old friend Mandip Singh Soin FRGS (Fellow of the Royal Geographic Society and a fine fellow indeed),  is a Sikh from India who has large collection of wildly-colored turbans, some with matching ties and socks. He is, shall we say, noticed wherever he goes. But, on this trip, noticed is a gross understatement.

As we walk through the medina in Marrakkech, a mob of teenagers runs up to Mandip and shouts “Ali Baba!” In his headwear, he looks vaguely like an illustration of the hero of Ali Baba and the 40 Thieves, obviously not from around these parts. They launch into medley of Bollywood movie songs sung, says Mandip, almost without accent.

Forget about the dysfunctional relationships often depicted in western movies, Moroccans, teenagers especially, worship the uncynical stars of Bollywood, the sappy love stories, songs and the dances that leave almost everything to the imagination.