Heaven and Hell at Lake Titicaca 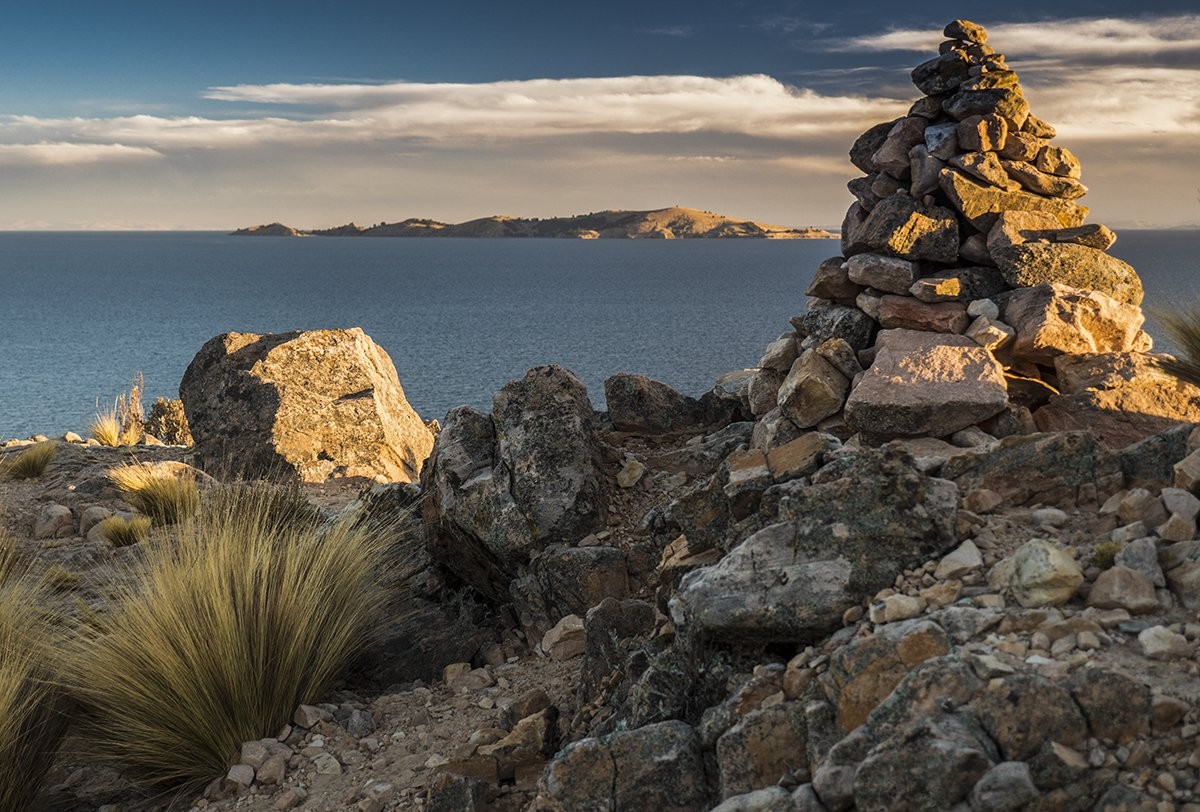 I gasp, I grunt. Normally, I find climbing a small hill easy. I am not a mountaineer but somewhere in my DNA there are at least couple of strands of mountain goat. I am at 12,500 feet aiming for 13,000 and despite a prophylactic chaw of cocoa leaf presented to me at a welcoming ceremony, my lungs beg for oxygen.

I have just disembarked a boat that had taken me across Lake Titicaca. And yes, there really is a Lake Titicaca, the inland sea in Peru with the name we all giggled about in fourth-grade geography class. I am trudging, with backpack, up a hill on the island of Suasi to a lodge where I will spend the next few days. In comparison to where I have just been, this is starting to look like heaven.

The name Titicaca is possibly derived from Titkala, a sacred Inca rock on Isla del Sol, an island on the lake. Titicaca is the world’s highest navigable body of water and at 118 miles long and 50 miles wide in places, the largest lake in South America.

But getting there hasn’t exactly been heaven. 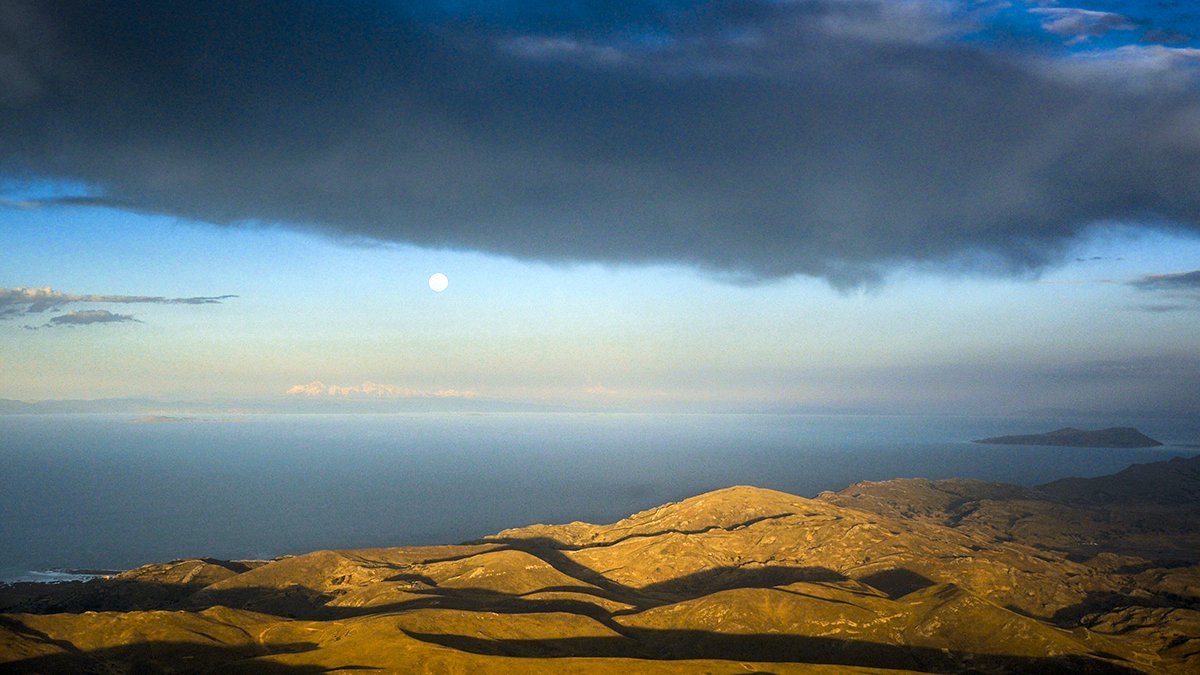 Yes, my expectations ran very high last night as our plane plunged over the snow-capped peaks of the Andes into the lake basin, set in a dramatic badland of jagged hills. Rivulets snaked  through it like thirsty vipers. A full moon rose above the lake. (Watch video of flight)

But as I flew closer, it began looking a little hellish.

Juliaca International, where most travelers arrive after a short flight from Cusco, isn’t so bad in itself: a tired little airport. The nervous driver jammed our baggage in the back of a van dominated by an unrepaired flat tire, cramming it around the flat and partially into the back seat before slamming the tailgate. We boarded the van and lurched into the street. The gate to flew open and out sprung the luggage, which bounded along the pavement as if it were running to catch up. The driver slammed on his brakes, got out, fiddled with the tire and jammed the bags back in.

Now underway, we entered a traffic jam in the city of Jualiaca (Okay, this is the hell part).

Imagine a treeless Wild West town of dirt streets with blowing trash instead of tumbleweeds and diesel buses and smoke-belching three-wheelers instead of horses, not to mention suspicious-looking hombres. Or, imagine a war zone.

“You can buy anything here, cheap,” said our escort, with a wink in her voice.

Juliaca is the commercial capital of a region whose chief industry is smuggling. It is near the northern end of a drug trail, where cocaine is given its value-added refinements before being shipped off by road, boat or air. It is also on the receiving end of a dodgy trade route through Bolivia for cigarettes, booze, gasoline, tennis shoes, electronics, some loaded off of Chinese ships in Uruguay and Chile.

Juliaca is an open-air bazaar of contraband.

But we moved on through toward Puno, a more savory destination on the lake. Looking over the driver’s shoulder I saw the gas gauge teetering on empty. I had visions of running out of gas with a flat tire in the middle of a shootout of drug lords. We made it, however, with a few drops of fuel to spare.

Puno is the stopping point for most tourists who arrive in caravans, check into big hotels, visit the buffet line, watch a cultural show, then putter off in boats to the Uros and Taquile Islands. Just a brief stop for us, however. Things would improve quickly.

Next morning we were off to the Uros, some 44 man made islands: rafts built from roots harvested from the bottom of the lake and tied together with totora reeds As the islands rot from the beneath, residents add new reeds to the top. The Uros, a pre-Incan people, originally built these islands to provide a means of escape from their enemies…until they were conquered by the Incas. Now they are all about the business of tourism. We were treated to a scripted lecture about the construction of the islands before being escorted to a “typical” Uros home for shopping. 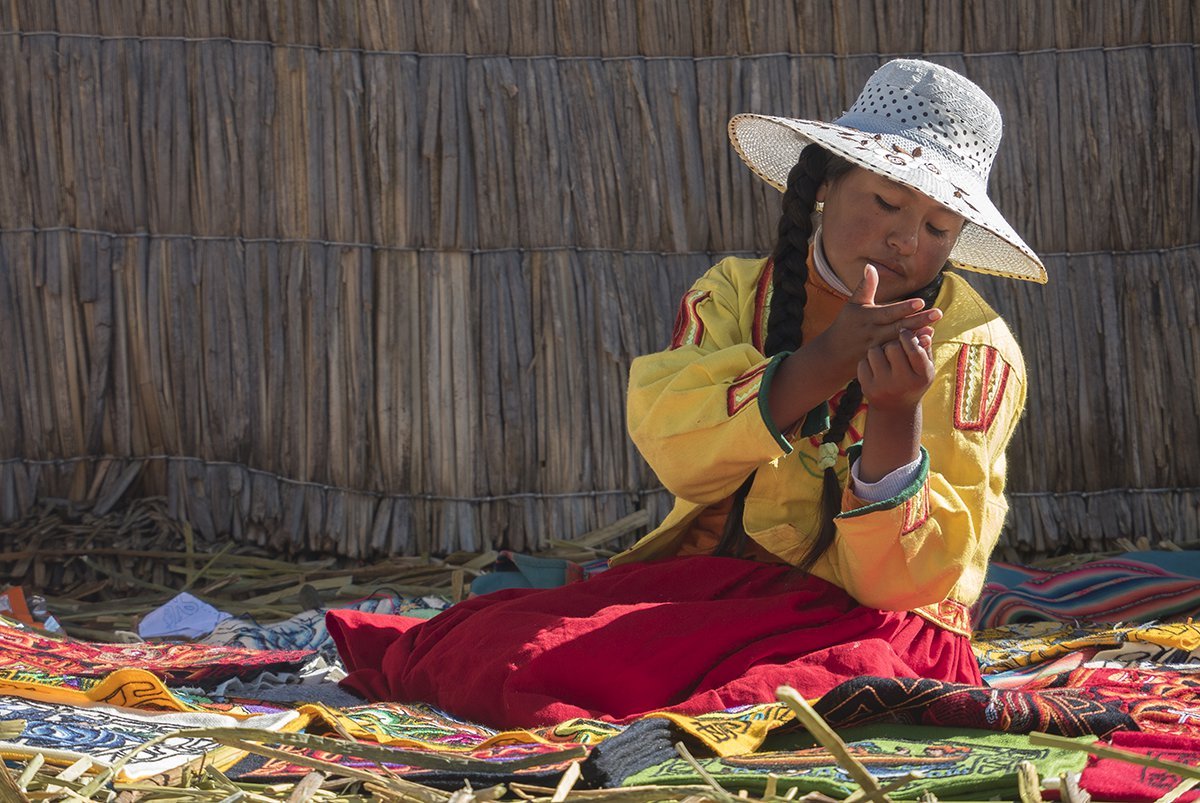 We watched other boats unload and tourists marched off to other parts of the raft to hear the same lecture, in English, Spanish and German. The islands are now solar powered and some have satellite dishes. That became evident when our hosts immediately turned their attention to one member of our group, namely Adolfo Aguilar, host of “Yo Soy,” Peru’s answer to “America’s Got Talent.” (Watch him on YouTube). They lined up for celebrity selfies.

Next stop on the tourist trail was Taquile Island, which is so hilly it takes a major effort to climb up and visit its villages. Since the 1970s, there has been a community-based tourism effort here where people could walk to the villages and stay overnight. We, unfortunately, didn’t experience that, ours was just a short stop. Now, companies operate cultural villages on the flat shoreline where locals dance, play flutes and drums and demonstrate their textile art, which has been honored by UNESCO. 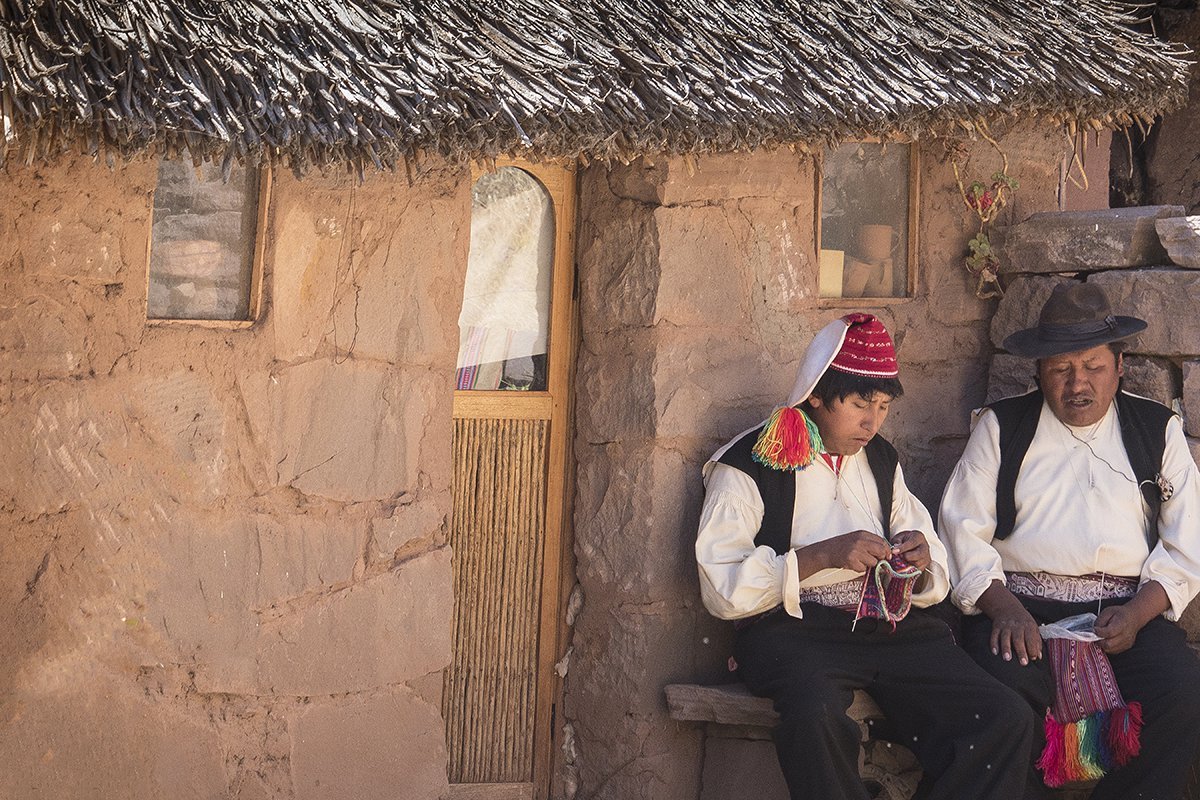 Men begin knitting at an early age and women make yarn and weave. We were welcomed with a cocoa leaf ritual. We chewed one of the nasty little leaves, which help prevent altitude sickness, and quickly spit it out. Then the leaves were ground on a rock and buried.  Locals store wads of leaves in their cheeks (In Cusco’s cathedrals, paintings show the Virgin Mary looking very much like a satisfied chipmunk). 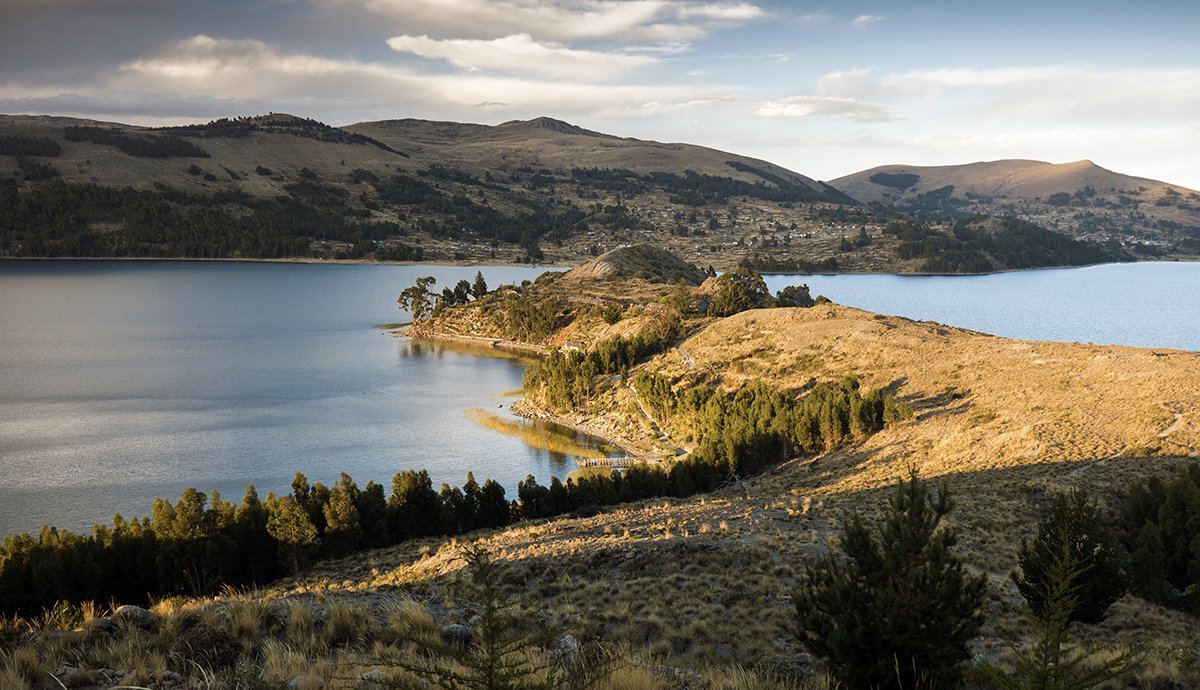 Panting, still gasping for breath, I reach the pearly gates of what is beginning to look like heaven, an eco-lodge on a plateau about halfway to the peak of Suasi Island. I am stunned by views of the lake. The air is so clear (what there is of it) I feel as if I could touch the other shore. I sit down for a cup of coca tea (much more pleasurable than chewing the stuff).

Suasi is a private island owned by one Martha Giraldo, who is now managing it.  Each of its rooms has a view of the lake. The island is solar powered. Rooms have no electrical outlets, but charging stations are scattered throughout to provide succor for travelers’ iPhones, tablets and digital cameras. I was beginning to become grumbly  when I found out that there was no heat in the rooms. Nighttime temperatures reach 28F. But I was welcomed by a hot water bottle in my bed, which me toasty and cozy under an avalanche of covers. 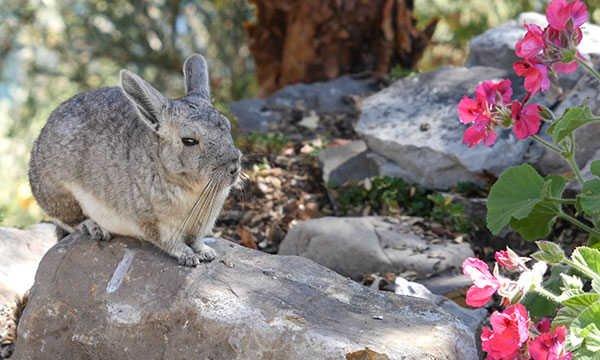 Vicunas and alpacas graze on the island. Vizcachas, cartoon rabbits that look like chinchillas, hop about the gardens, grazing on anything convenient. Trout swim in the waters below. Aside from alpaca steaks, one of the most appealing local dishes is rainbow trout filet. Brown, Rainbow and Lake Trout were introduced to the lake from Canada in the 1930s and have since crowded out some native species.

We hike the island and take a boat ride around it spotting Andean Gulls, coots, Black Face ibises, Titicaca Grebes, brightly plumed Puna Teal and cormorants. We watch a lumbering hummingbird, a giant Patagonia Gigas, struggle to stay aloft. It is big, fat and unhummingbirdlike.

Late afternoon, I face another another big hill, another climb. Can I handle it? Mr. “Peru’s Got Talent” is in the lobby of the lodge snorting on a tank of oxygen, his eyes unflinchingly focused on his iPhone. I have dosed on cocoa tea and sniffed the pungent, minty leaves of the muña plant, said to help with altitude and digestion. 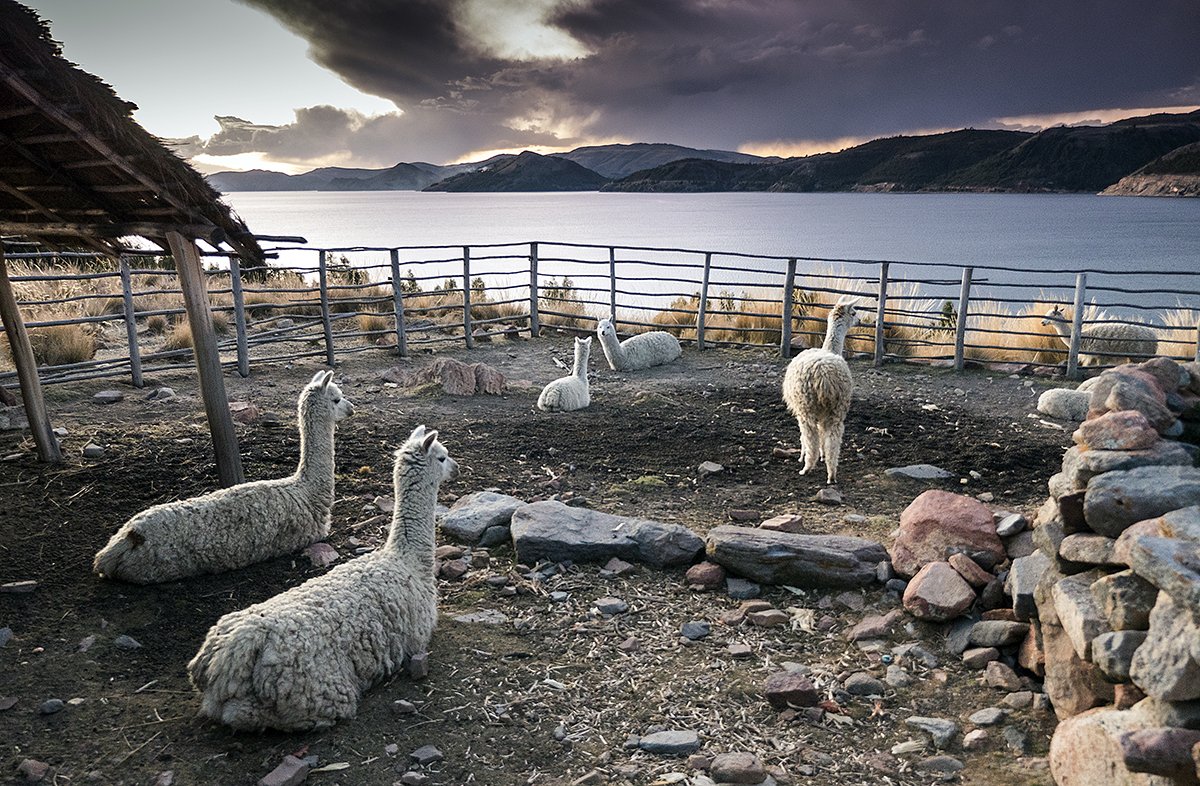 I make the trek up Itapuluni Hill, the highest point of the island, past a pen of alpacas, to a peak that looks out over the lake and island and across the border into Bolivia. 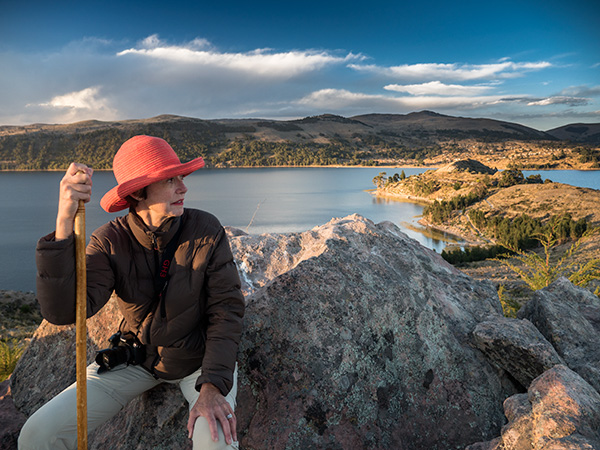 I look down at the lodge far below, amazed that I made it to the top. Maybe my body has decided to go native. 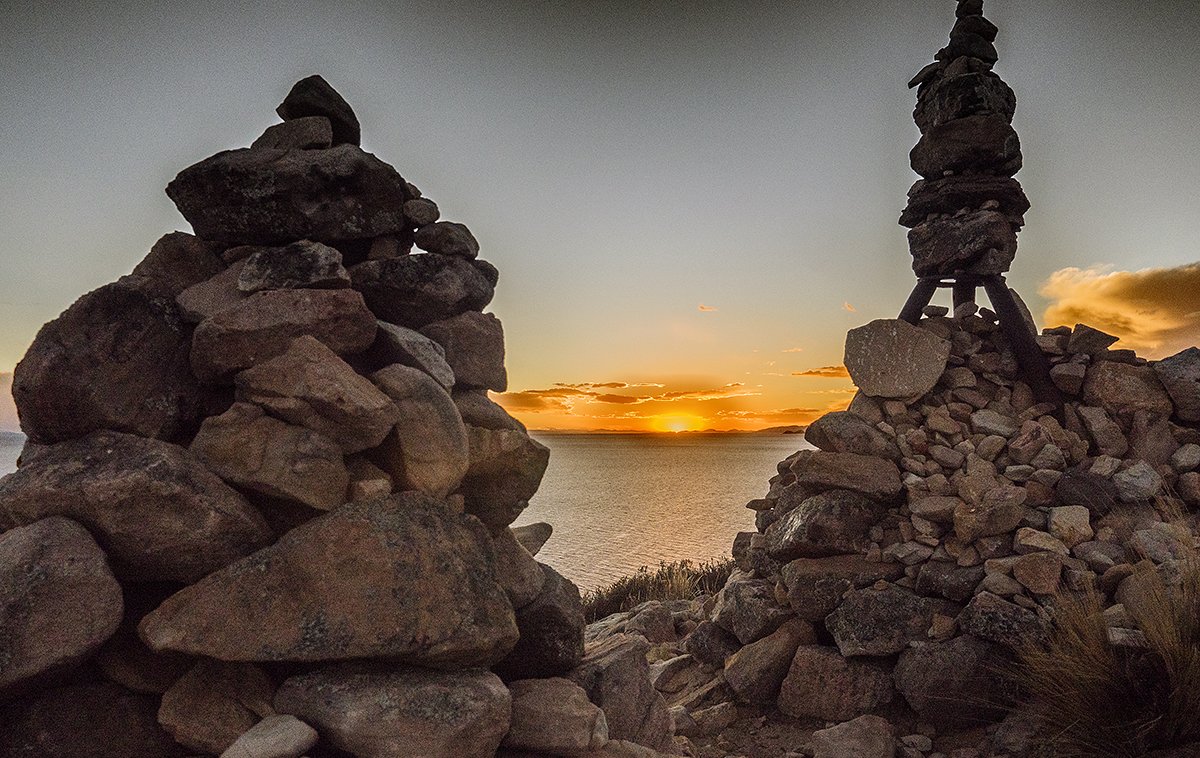 Sunset from the summit of Suasi Island – Photo: Russ Johnson

The sun sets behind rocks piled up in towers, what look like offerings. Stars begin to appear, those of both northern and southern skies, followed by the rise of a full moon.

Next morning, I snap my last picture of the lake, tag it as such and upload it to Facebook. It quickly attracts a stream of oohs and ahs and “likes.” After a short stop in purgatory (Juliaca airport) I will be on my way back to Lima and home.

But there is a snag, a deed of the devil that threatens to gum up my smooth transition back to civilization. A man emerges from the lodge and announces that there is a truckers’ strike blocking the road to the airport and that our transportation can’t get through.

Wait, we are told.

After about 45 minutes, we get the signal to go. A half dozen of us are herded rapidly down the hill and loaded into a Zodiac boat for a quick trip to the mainland. There we hike up to a highway where there is eerily no traffic in either direction.

The truckers’ strike story begins to change. What has really happened is a battle between smugglers and police. One of our group said he had seen it on CNN. Thirteen trucks loaded with contraband had been stopped by an armed convoy and their drivers, far from calling a strike, were battling the local militia with guns and Molotov cocktails. We were stuck behind enemy lines.

But there is a solution. A local, who worked for the hotel, was on his way in his personal van. He will pick us up and deliver us, via a side road, across the lines.

A few hotel staffers who are hitching a ride with us are headed off to a dance contest to celebrate Peruvian Independence Day, July 28. They pull out their costumes and show them to us. Then they perform their dances, in the middle of a highway with no traffic, accompanied by music from an iPhone.

Finally a small van comes puttering along and we board. Off we go, grinding up hills, the driver getting out frequently to check the undercarriage. We pass through two villages. In each one, he tries to bum a quart of oil from a local, to no avail.

We reach a more modern, businesslike van waiting on the side of the road. We sigh. Our airport transportation made it through from the other side.

We crawl in and forge on for another fifteen minutes until we reached a police roadblock.

“Here it is,” says our escort.

Our driver makes a right turn up a narrow, rocky road above the highway. We look down. The shooting had stopped. We see soldiers, armed vehicles, a TV news cruiser and overturned trucks with people peering into them. Locals scurry about with looted contraband, some are running next to our van carrying brightly colored boxes. 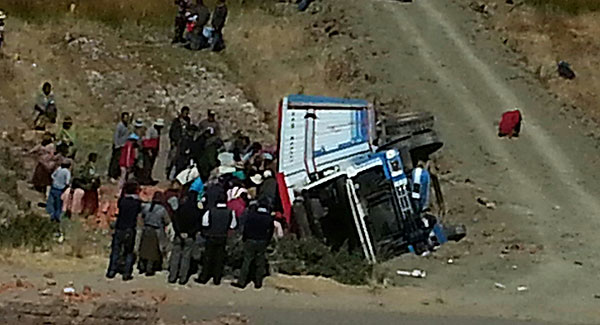 We head back down the hill. At the bottom, an officer in a flak jacket smiles and waves at us as if he were proud of his accomplishment. Our escort says, however, that the battle might not be over yet. He say that the gang, called Culebra Norte (Snake North) which smuggles contraband north, may have formed an alliance with the drug smugglers and speculated that they could call in reinforcements.

We are happy to get past the melee, wind our way through the mean, filthy streets of Juliaca and barely make our flight.

As a footnote, I did a news search and didn’t find similar incidents and no renewed fighting, so travel is probably pretty safe here. We were told that corruption is part of everyday business and that smuggling is probably usually given the wink and nod treatment rather than a muster of troops.