Grand Central at 100: Its a “Toyminal” Not a Station 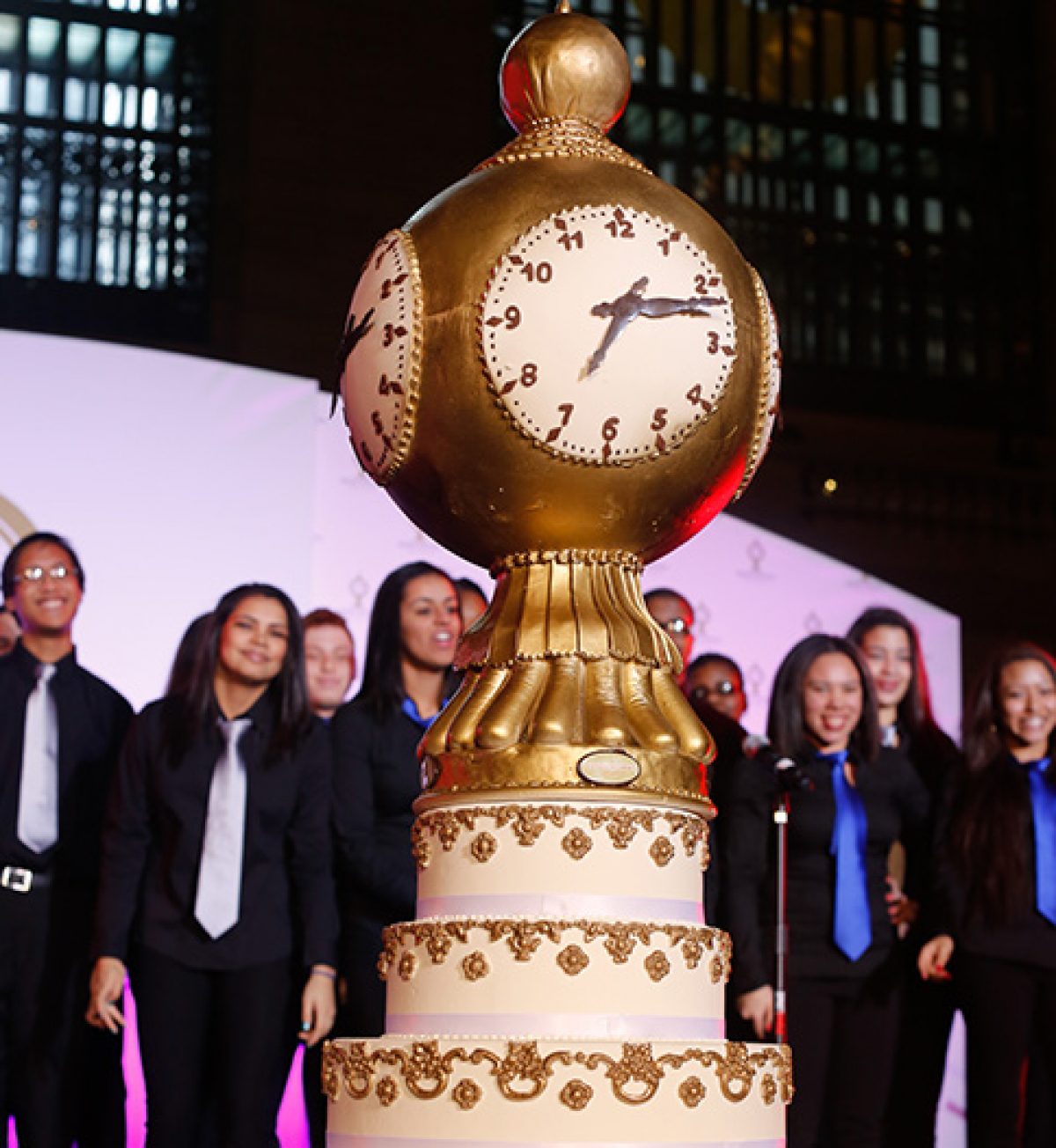 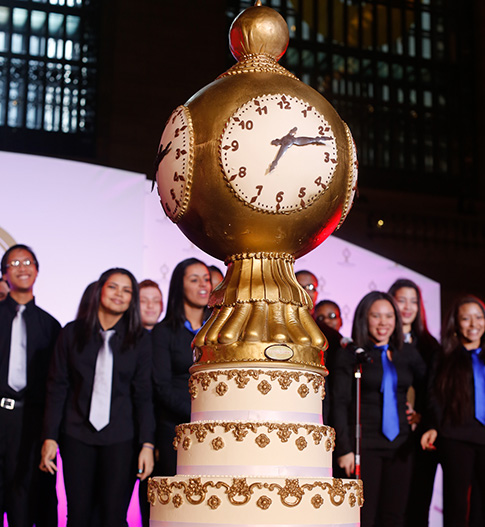 I didn’t make Grand Central Terminal’s grand birthday party Saturday but I did pay homage last week, as one of the 750 thousand who visit daily.

And I did take some pictures, one of which I projected to a crowd at the New York Times Travel Show where I moderated a panel on digital photography.

And I did get into trouble.

“Its a toyminal,” shouted the voice from the back of the room, “Grand Central Toyminal.”

No New Yorker would regard this as a mere station, some namby pamby whistlestop, even though it is mostly a commuter terminal. AMTRACK departed for Penn Station in 1991. Still, Grand Central Terminal is a grand terminus, the end of the line where 67 tracks end or begin. Grand Central is, by number of platforms, the biggest, baddest train station in the world.

Saturday it celebrated its 100th birthday.

Grand Central Terminal doesn’t just signify a physical beginning and end, it is a mirror of American technologies, triumphs and fears.

When it was first dedicated on February 2, 1913 as Grand Central Station, as it was called then, it was a tribute to the miracle of electricity. They showed that off by festooning its giant chandeliers with bare light bulbs. Today, some 30 thousand bulbs need changing each year. The newest ones are compact flourescents and LEDs. 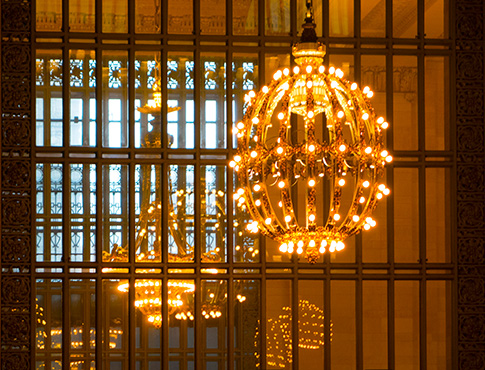 Deep underground there is a once top-secret cavern known as M42 that contained the AC to DC converters that were used to power New York’s massive electric train set. Now they are solid state, but the originals were mechanical, with rotating coils and armatures. During WWII, armed guards were ordered to shoot-to-kill intruders because sabotaging the devices could have halted troop movements on the East Coast. Two German spies were arrested by the FBI before they could do their dirty deed, which could have been accomplished by simply tossing a pail of sand into the works.

In 1957 a hole was poked into the ceiling to accommodate a Redstone missile as a show of US might after the Soviets launched Sputnik and America dived under its collective school desk. 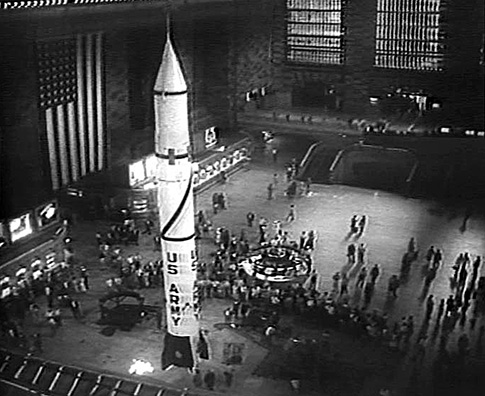 Until 1964, CBS Television originated its broadcasts from Grand Central: “Douglas Edwards and the News,” Edward R. Murrow’s “See It Now” as well as the long running show “What’s My Line” with its panel comprised mostly of New York socialites. 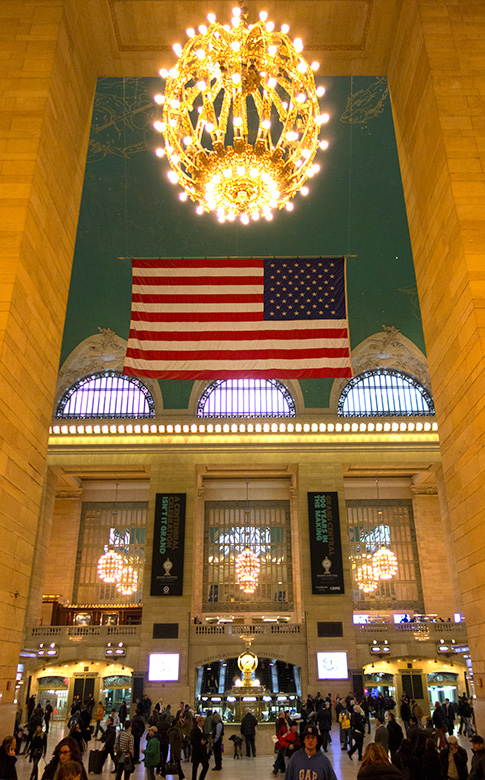 Shortly after the September 11th World Trade Center attacks, a giant American flag was hoisted to the ceiling. It will probably remain there as removing it would likely cause a political firestorm.

And now, and now?

Just allow your eyes to drift upward from that iconic gold clock, the symbol of Grand Central Terminal, atop the information booth, that clock with four faces carved in opal, valued by Sotheby’s and Christie’s auction houses at between $10 and $12 million. 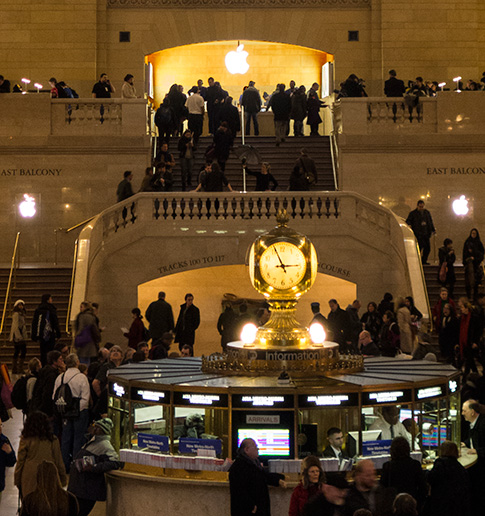 That’s it, you spotted it.

Looming large at the top of the grand stairway (modeled after one at the Paris Opera House) is a newer icon, to some of American ingenuity, to others a golden calf.

In 2011, the Wall Street Journal reported that New York’s Metropolitan Transport Authority bought up the lease of a restaurateur for $5 million to make a 10 year deal with Apple for 23 thousand square feet. Above the bustle of the main concourse, dozens of mostly-men hunker in devolutionary posture over iMacs, iPads and iPhones (Note that Neanderthals may have gotten a bad rap for being hunch-backed, as this notion may have sprung from one arthritic fossil). The Grand Central Apple Store has two Genius Bars for tech support and 15-minute classes for commuters wanting to kill time while waiting for their train. 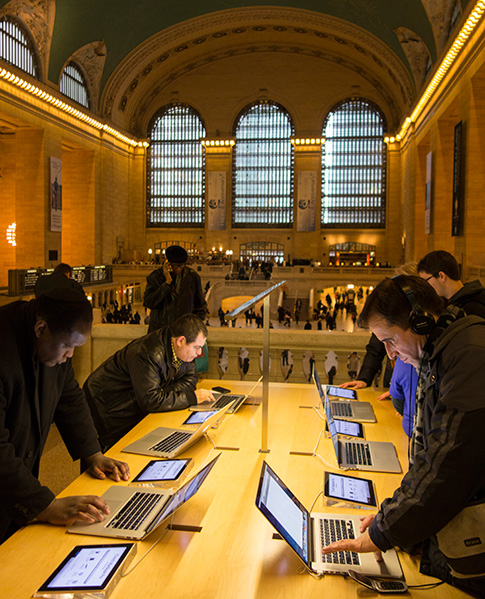 But Apple’s huge presence doesn’t really alter the atmosphere of Grand Central. It is miniscule compared to what could have happened. In 1954 the NY Central Railroad Commission failed in its attempt to demolish Grand Central Terminal and build a six million square foot office tower in its place. In 1978 developers tried to stick another tower on top of it. The New York City Landmarks Preservation Commission took that case all the way to the US Supreme Court and won.

For years, Grand Central was a haywire and duct tape job, in need of massive repairs. But in 1990 a $425 million master plan was approved to restore it and the revitalized Grand Central Terminal was rededicated on October 1, 1998. 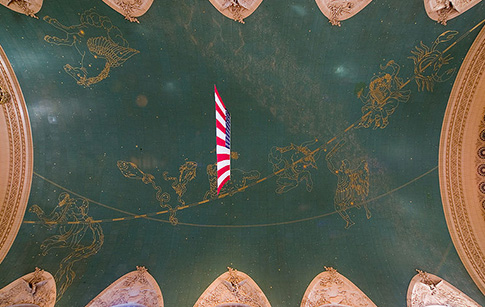 Those restorers revealed an odd view of the universe when they removed decades of gunk stuck to the ceiling thought to be diesel exhaust, but analyzed by spectrograph to be mostly tobacco smoke. They restored an astronomical ceiling, a crude map of the heavens that was conceived in 1912 and replaced in the 1930s. But the sky was depicted backwards. Was it a God’s eye view, as some have suggested? Was it the developers and the artists wishing to symbolize Grand Central as a triumphant creation of man?

Most people think it was just a mistake.