It was a day that marks a life passage in a boy’s adolescence. It was spring and I was helping my father remove storm windows and replace them with screens. Robins mined for worms, Dizzy Dean or some other drawling baseball once-great honked from a radio, power lawnmowers chorused. We stopped and refreshed with a lemonade and he — haltingly — told me: “Son, you are reaching the age when I think it is time that you know some of the facts about being a man.”

Are you sure, he replied. “Barbecue is really an art.”

I confess that I have always been more of a food voyeur than a chef, barbecue being the exception. As a child, while other kids stuffed Playboys under their mattress, I pored over Good Housekeeping, leering at juicy cuts of tender meat that looked decidedly different from the gray slabs of roast beef my mother scorched as if she were performing exorcisms.

I am on a flight, returning from New York and a luncheon in the private dining room of Gourmet Magazine, which I have faithfully read for years. I doubt that I have attempted more than a half-dozen of its recipes, but reading about Garlic Mashed Red Bliss Potatoes is quite satisfying in itself. For this flight, however, I have chosen a book by the late M.F.K. Fisher called “Long Ago in France” in which she describes the creation of a tart:

“He took the apple slices from the bowl one by one, almost faster than we could see. And shook off the wine and laid them in a great, beautiful whorl, from the outside to the center, as perfect as a snail shell. We said not a word. The music trembled in the room. The light burned down. Papazi shuffled the thin pieces of fruit like a wizard, or a little fat god, and they seemed to fall out from his hands and fall rightly into place. He did it as effortlessly as a spider spins a web. Then he poured thin apricot glaze over the whole, shook it gently, and slid it into the oven. He stood for a second looking at the shut door, and laughed sadly, like any man, either earthly or celestial, after the final pang of creation.”

I read this, over the American prairie, cramped in cargo class on an American Airlines 767, poking at a snag of pasta with a splash of red sauce on top that looks vaguely like an exit wound.

Gourmet’s dining room is a simple, elegant transformation of an office conference room.

The clean “arts and crafts” lines of its furniture, the direct, over the table lighting and the simple design of the Genari Dorato china show off food presentations at their best while reflecting a warm glow in the faces of diners.

I wish I had seen Chef Jackie Bobrow as she prepared our fare, if she had presence in the kitchen of Fisher’s Papazi. I would like to think she did, even though modern dining has much more of an intellectual, international fusion of flavors than the simple 1930s French fare that Fisher describes. Chefery is perhaps now more cerebral than physical.

Try for starters Lobster Nachos with Asian Guacamole and Spicy Sour Cream. Never mind the combination of Nachos (which are really won tons) the California avocados and the lobster. But, add sake, sambal and gingerroot and it is possible to become mildly jet lagged at the thought.

Then came the Foie Gras Pate on Brioche Toasts with Shallot jam, a Goat Cheese Salad with Dried Cherries and Pancetta Vinaigrette and Salmon with Horseradish Crust, Cucumbers and Crème Fraiche, Mashed Potatoes and Haricots Verts tied in tiny bundles as if they had ju 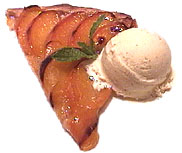 st been harvested by the little people.

For dessert it was an Apricot Galette with Homemade Vanilla Bean Ice Cream.

It seems, more than ever, that menus have a subtle onomatopoeia…that I can vicariously taste them. Chefs have become novelists and playwrights and I often find myself ordering things for their unusual plot twists. I fell in love with the menu at Tabla a new Madison Avenue restaurant from Danny Stern of Union Street Café fame. It featured a page-turning mixture of South Asian and Middle Eastern spices on common dishes. But I found some of flavors made statements that were just too powerful (probably why some of those countries keep shooting at each other)

As I complete this story, I am preparing for a weekend barbecue. As a backyard griller I have run the gamut of marinades from A1, to jerk sauce to Thai curry. Today, however, it will be the way Dad made it. Butter, pepper and, as Dad said. “You can never have enough dang salt.”

It should be a “potboiler.”