Glancing at the Stars: Jaipur, India 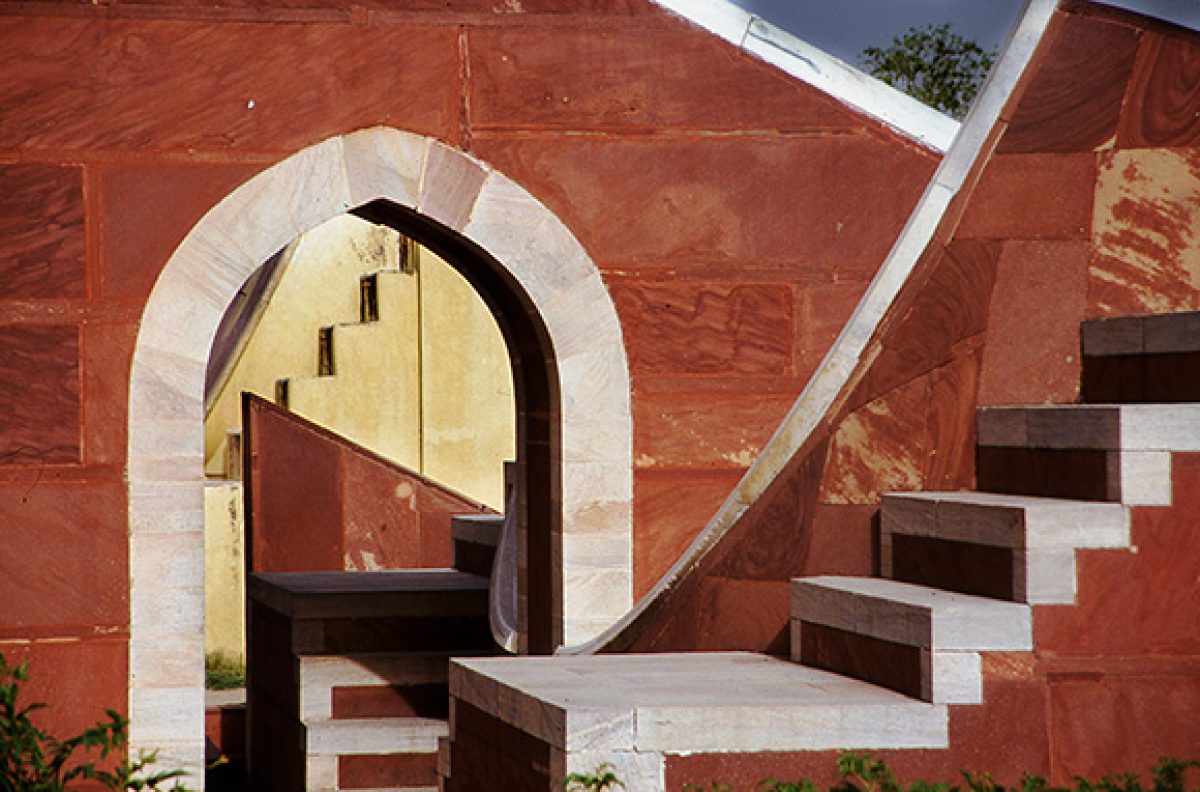 The maharajas of India didn’t skimp on palaces or toys, especially if they were nerds. 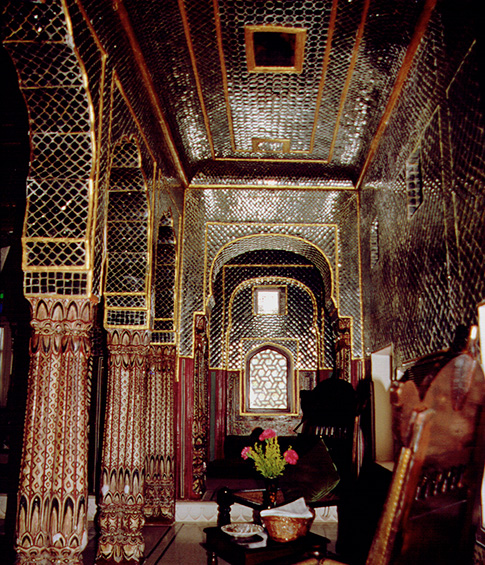 My Room at the Samode Haveli – Photo: Russell Johnson

The nerd of which we speak is Maharaja Jai Singh II who, in the 18th century, ruled what was then known at the Kingdom of Amber.  He amassed a collection of astronomical devices — astrolabes and telescopes — studied the ancient astronomers of Greece and Arabia and built five observatories, one here in Jaipur, India.

I am here in Jaipur, in Rajastan, were I have checked into the Samode Haveli, once a manor house for the royal family, now a boutique palace hotel. Yes, you can roll up in front of it in your Rolls, as a maharaja might have, but it does have an elephant ramp. Certainly a cut above the Best Exotic Marigold Hotel (filmed in Jaipur). 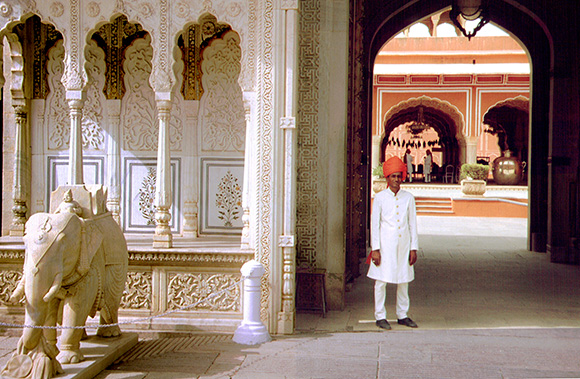 Jaipur was India’s first planned city, laid out in a grid based on ancient Hindu patterns. It was christened The Pink City by the Brits, who literally painted the town reddish in 1876 to welcome a visit by Edward, the Prince of Wales. 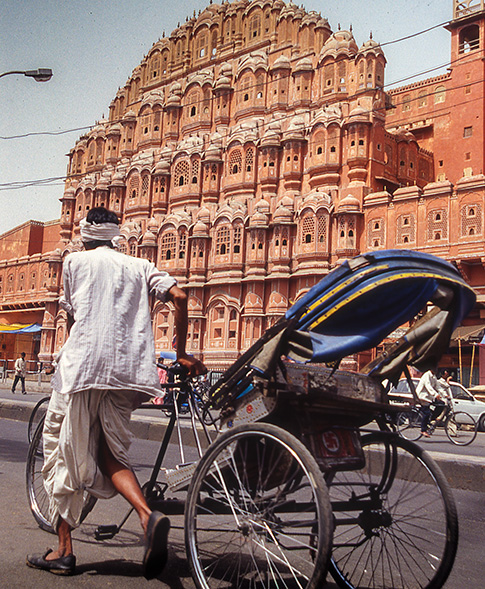 So you would think that this maharaja, this man of science, this collector of modern astronomical parephenalia would create a state-of-the-art science project. After all, the telescope dates way back to 1608. But no. Singh chose to build a naked-eye observatory, no lenses, no moving parts, according to ancient Arab design. The astronomers in residence were Hindu astrologers.

Why did he build it? Ego, perhaps, certainly power.  Scholars say the observatories were monuments to the maharaja’s god-like authority: He could control the time, predict the future.

The Jantar Mantar (“Formula of Instruments” in Sanskrit) is a collection of twenty astronomical devices built between 1727 and 1734 and is a UNESCO World Heritage Site. 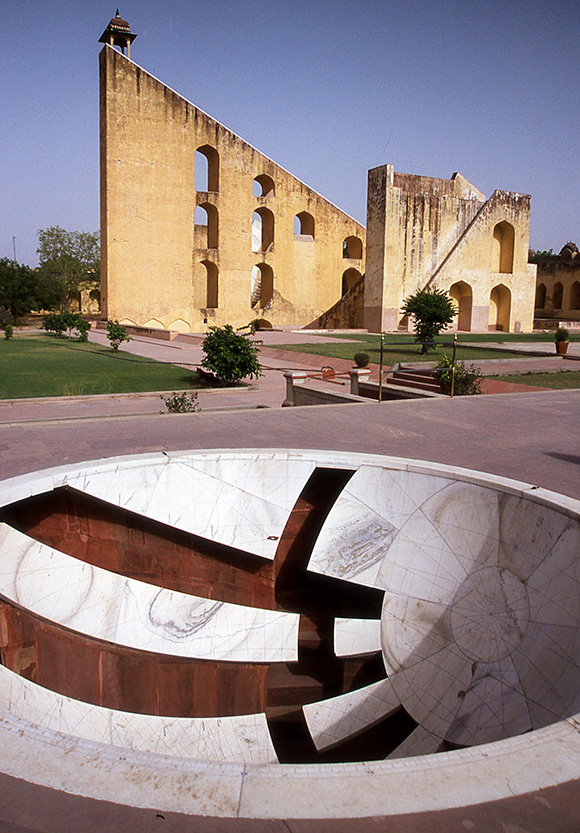 A garden of strange architectural delights, it is.

Towering above the complex is the Samrat Yantra, at more than 70 feet, the world’s tallest sundial. The cupola was used as a platform for announcing eclipses and monsoons.

The Jai Prakash is an in-ground sundial based on a 300BCE Greco-Babylonian design. You can find the same style in European churches built in the Middle Ages.

This maharaja was a man of the world. 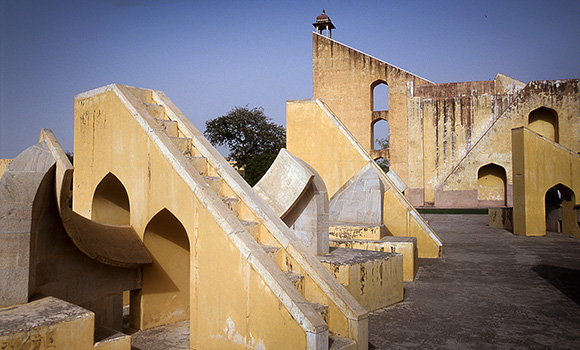 Ten smaller structures stand on their own, lined up so that astrologers could sight the positions of particular constellations, signs of the Zodiac.

These were masters of Jyotisa, or Vedic astrology. There is actually an Android app for that today.

Astrology remains a part of the Hindu culture. After a battle remindful of the evolution/creationism kerfuffle in the US, astrology recently won out as officially a science in India. A conservative government came to power in the early 2000s and a ministry proclaimed that astrology be added to the university curriculum. Scientists howled in protest. A “giant leap backwards,” some called it.  They lost their argument. In 2011 the Bombay High court reaffirmed astrology’s standing as a four thousand year-old “trusted science.”

Today astrologers still flog their cobra oil at the Jantar Mantar, claiming they can predict the weather and the crop.

Jantar Mantar has been used as a backdrop in several films and was the subject of a 1964 Bollywood Movie.

Thanks to IBEX Expeditions for assistance and advice on this story.