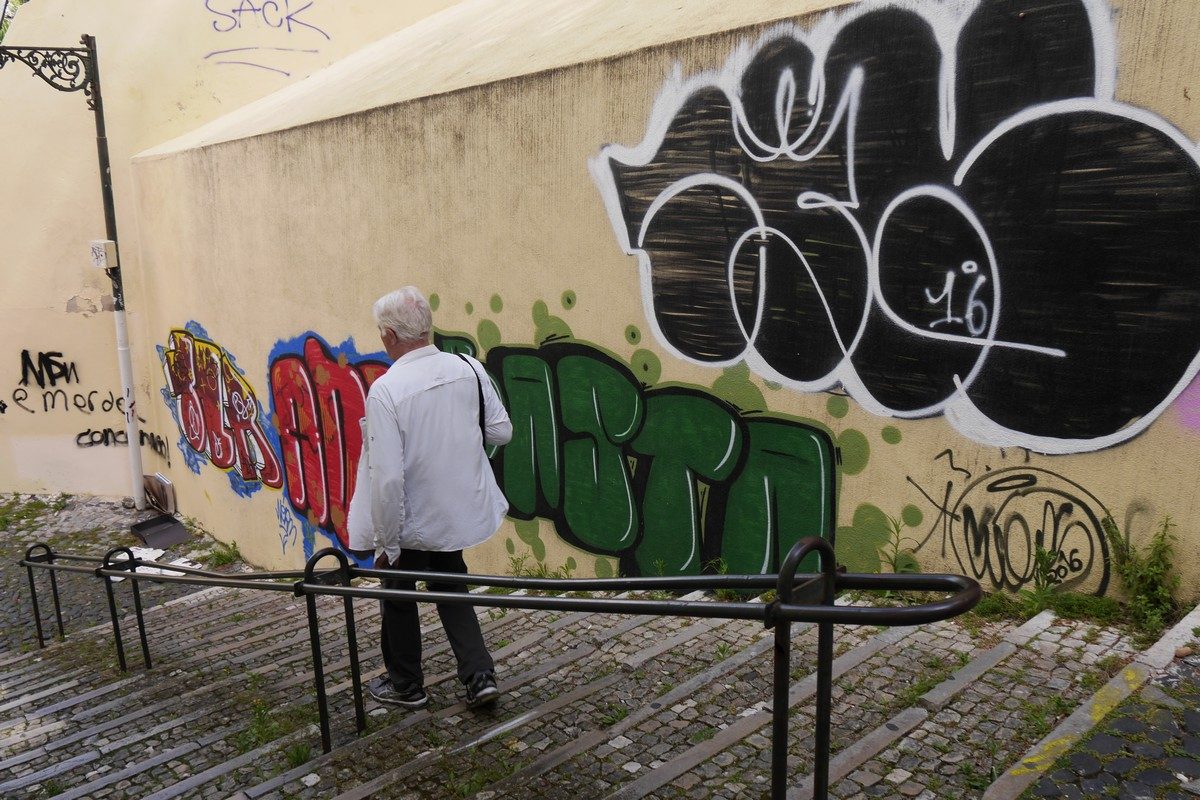 Today Portugal is one of the hottest destinations for travel in Europe. But back in 2008 the country was hit hard by the worldwide recession. Portugal’s austerity measures had put people under tremendous pressure. Lisbon’s central district, the Barrio Alto, a magnet for youth because of the clubs and nightlife, was being hit hard by vandals with spray cans. Three hours drive north of Lisbon, Portugal’s second largest city Porto was also struggling with defacement of long-empty buildings.

The graffiti problem was nothing new.  Social and political scrawls and illustrations abounded during the revolutionary period following the 1974 Revolution. And in the harsh economic times of 2008, it rose again. Recognizing that people needed a voice and the tremendous exposure a canvas of city walls could provide, eight years ago the city of Lisbon developed a special platform and dedicated team to address graffiti and street art. That same year, after successfully tackling the graffiti problem in the Bairro Alto, the city set up a legitimate space for artists to create urban art there, giving rise to GAU,(Galleria Arte Urbana) the Urban Art Gallery of the city of Lisbon. https://www.facebook.com/galeriadearteurbana/

It took some time and dialogue to legitimize and embrace public art, according to Ines Machado of the Lisbon City Council Department of Cultural Heritage: “After a first phase dedicated to winning over those who harbored resistance or distrust (both on the part of the artists and the general public), GAU began to be recognized for its work and took on the role of ‘facilitator’ in the world of street art, which permitted the Gallery to reach a growing number of interlocutors and projects, even becoming a notable reference as an urban art platform both on the national and international stages.”

Lisbon’s mayor, Fernando Medina commented on the platform that the city has provided, “It is that same capacity of merging visual language and political and social critique that, throughout the decades, has been distinctive to Lisbon’s street art. This perception has been one of the main reasons to establish the very peculiar project GAU (Urban Art Gallery). This project aims at promo

ting, protecting as well as adding value to street art as an artistic practice setting it aside from the mere acts of vandalism (those being destitute of meaning, empty).”

So successful were GAU’s efforts in converting mistrust into appreciation of street art and integrating and elevating it as part of Lisbon’s artistic and cultural heritage, that spaces have opened up around the city for street artists to show their works including many who are internationally known artists, though the vast majority of those featured are Portuguese. GAU has caught the world’s attention to promote urban art, exchanges, and networks, and has been invited to present at a growing number of urban art conferences.

A three-hour train ride north of Lisbon, we reached Porto, where one street artist’s works particularly caught our eye. Nuno Costah, http://www.costah.net/ started doing classic graffiti in 1997 and street art, illustrations and wheat pasteup. Five years later, Costah is an independent artist and finds that throughout his many years doing street art he has not had a problem with Portugal’s police and finds they are not “hardcore”. We asked him some questions:

CT: Why do you do street art?
NC: I do it because I love to create in a massive way that it’s almost impossible to have all the paintings in an atelier. In this way I hit the streets, and here in Porto we have so many old buildings that it’s perfect for doing this.

CT: Tell us about this particular piece, “I’ll Never Give Up.

NC: Almost all my paintings are about Life, Live and enjoying cool stuff. I like to find places and create cool and funny paintings….This piece it’s to show to people that even if you are not invited to some street art trendy fashion events, you still can do it and you must do it if you really want. Just never wait for others to give you the opportunity, just do it…DIY lifestyle. 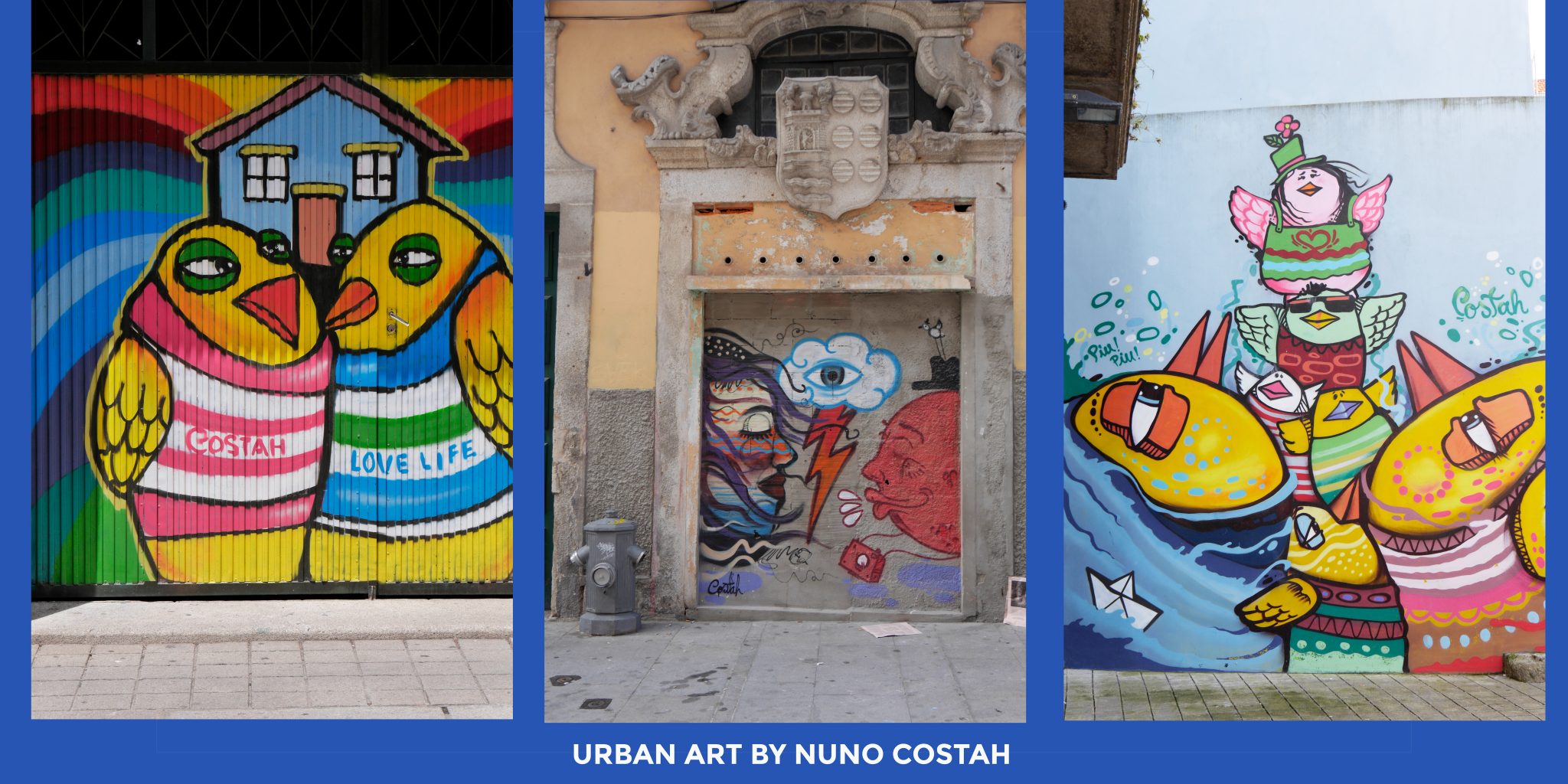 Granny with a spray can?

PORTUGAL INVITES EVERYONE TO GET INTO THE ACT

Everyone is getting into the urban art act even senior citizens. Lata 65 is a program of workshops for senior citizens in Lisbon, introducing them to the culture and techniques of urban art and then turning them loose with stencils and spray cans. The Lisbon Participatory Budget Program was facilitated by local councils. Here are some images. Talk about demolishing stereotypes!

WANT TO SEE IT FOR YOURSELF?

Both Lisbon and Porto have turned random graffiti into a vibrant art form that has spawned art galleries, publications, art walks, festivals and even programs for young and old aspiring urban artists. This year in Lisbon a major urban art celebration took place midyear and is scheduled again. MUROLisbon Street Art Festival will take place in May 2017, combining concerts, discussions, street food, puppetry, film, theatre, and featuring the works of highly recognized urban artists. See a collection of images from the 2016 festival here.

Portugal is not alone in the urban art scene. There are festivals all over Europe and the world as urban art is embraced and celebrated. Thinking of going somewhere and enjoying art that is not necessarily housed within museum walls? When you’re planning your next trip, simply google your destination city and “street art tours” and you’ll find a whole new perspective on art and life.