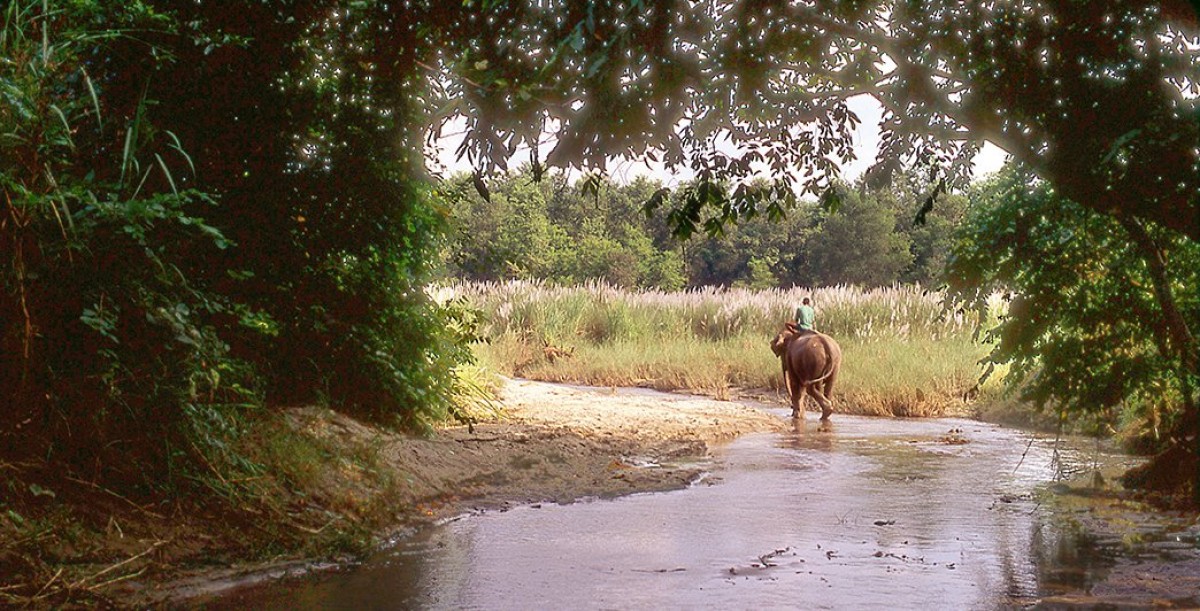 Nepalis call it the “brain fever” bird. It starts with a middle-C whoop and, like a diva gone mad, sails up the scale in a frenetic arpeggio. This morning, jungle sounds are tame. No wall of cicada or cricket racket and except for an occasional monkey screech or “brain fever “aria, nothing stands in the way of subtle sounds: the rumble of an elephant purr, the rustle of brush. A tiger, perhaps? Or a rhino? Or maybe it is the elusive jungle fowl, a wildly colorful bird that is said to be the ancestor of the modern-day domestic chicken.

This is the tenth time I have ventured out on the back on an elephant into the jungle at Royal Chitwan National Park, which borders India. I will never tire of returning to a place where I can sit on a veranda in a steamy jungle and gaze upon the snow-capped Himalayas in the distance; where I have seen the flash of a tiger in the brush, grumpy rhinos, insects that look like lacquered jewelry, orchids, centipedes the length and color of Dennis Rodman’s shoes, crocodiles sunning on riverbanks, termite mounds that look like the castles of demented fairies and a vast buffet of birds — about three hundred species of them — one of which I am determined to photograph.

So here I am, headed out into the tropical tangle with a group of wide-eyed, camera-toting newcomers who seek their first glimpse of the wild rhino and, if lucky, the Royal Bengal Tiger.

My job is to videotape A CHICKEN.

It is not that the wild jungle fowl is scarce. It is just that it doesn’t sit still. On my last trip all I captured were a few fleeting frames of a drab female. What I am seeking is a fully- plumed, testosterone-charged, ready-to-boogie male for a documentary I am doing titled “Chickens” (Please don’t ask me about it).

Riding an elephant can be a jolt. But at least we weren’t trotting or galloping. Years ago I rode an express elephant, one enlisted in the service of point-to-point transportation rather than tourism. The elephant trot is guaranteed to rearrange your innards. An elephant gallop will make your backbone feel like a pile driver. A tourist elephant, while not having the suspension systems of a Lexus, just strolls. 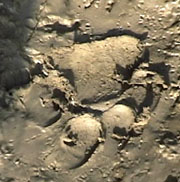 We ride past deeply rutted trees, trees that tigers had used as scratching posts. Tigers and leopards had been spotted several times in the past week. “Scat,” whispered our mahout as he pointed to a deposit next to a series of pawprints. I resisted the temptation to collect a souvenir. 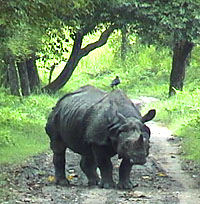 It doesn’t take long to spot a rhino in these jungles. They, along with most other forms of wildlife, have been growing in number because of the rigorous environmental controls the government has placed on the park. Royal Chitwan was once a private game reserve where the ruling Rana clan treated royals from other countries to tiger hunts. Although not exactly a noble endeavor, it did keep the area preserved and undeveloped.

The Rhino looks curmudgeonly, like a scaly Winston Churchill. It snorts and grunts: “You had bloody well keep your distance.” The baby, however, manages to look cute. A ton of cute, nevertheless cute. We follow the pair as they plough through the brush. Elephants, thick-skinned as they are, are wary of rhinos. Several times I have sat on top of an elephant that has reared back when a rhino threatened a charge.

“Chicken,” shouts our guide. I reach for my camera and try to steady it. The elephant isn’t cooperating, however, turning in the wrong direction so I have to crane my neck. The jungle fowl crosses the path and disappears into the grass. I get another shaky shot of the back end of a bird.

I did not see a tiger on this trip. There are few of them as the territory of each extends over a many kilometers. They also do their hunting at night. The best time to see a tiger is just after the rainy season, in September or October, before the grass has grown high. Rhinos, birds, deer, monkeys, butterflies and foppish insects are abundant, however, as is the oddball gharial crocodile, whose snout looks like a swizzle stick, that basks on the riverbank.

Chitwan is reachable by automobile, bus or air from a tiny airport at Meghauly where a World War II crank air raid siren is used to clear the runway of children and cattle. A snake charmer with a cobra in a basket guards its entrance, collecting coins…spiritual flight insurance premiums. I prefer to hire a car, however, and drive from Kathmandu on a road cut down through spectacular canyons.

I have stayed at two jungle lodges in Chitwan: Temple Tiger and Tiger Tops. Both are first-class operations and I would rate them equal but different experiences. Temple Tiger has charming, comfortable little jungle stilt houses and a great open air restaurant. Tiger Tops, a bit pricier and more social, is an older traditional jungle lodge with two larger multi-apartment buildings, some clusters of huts and an enclosed dining area. Both offer elephant safaris and jungle walks with experienced guides.

I did get my chicken shot. I was sitting in a lawn chair at Tiger Tops nursing a beer and a cackle of them walked onto the paddock and started pecking away. I simply crept up to them and made my video capture.