Fowl Play in the Jungle – Chasing Chickens in Nepal 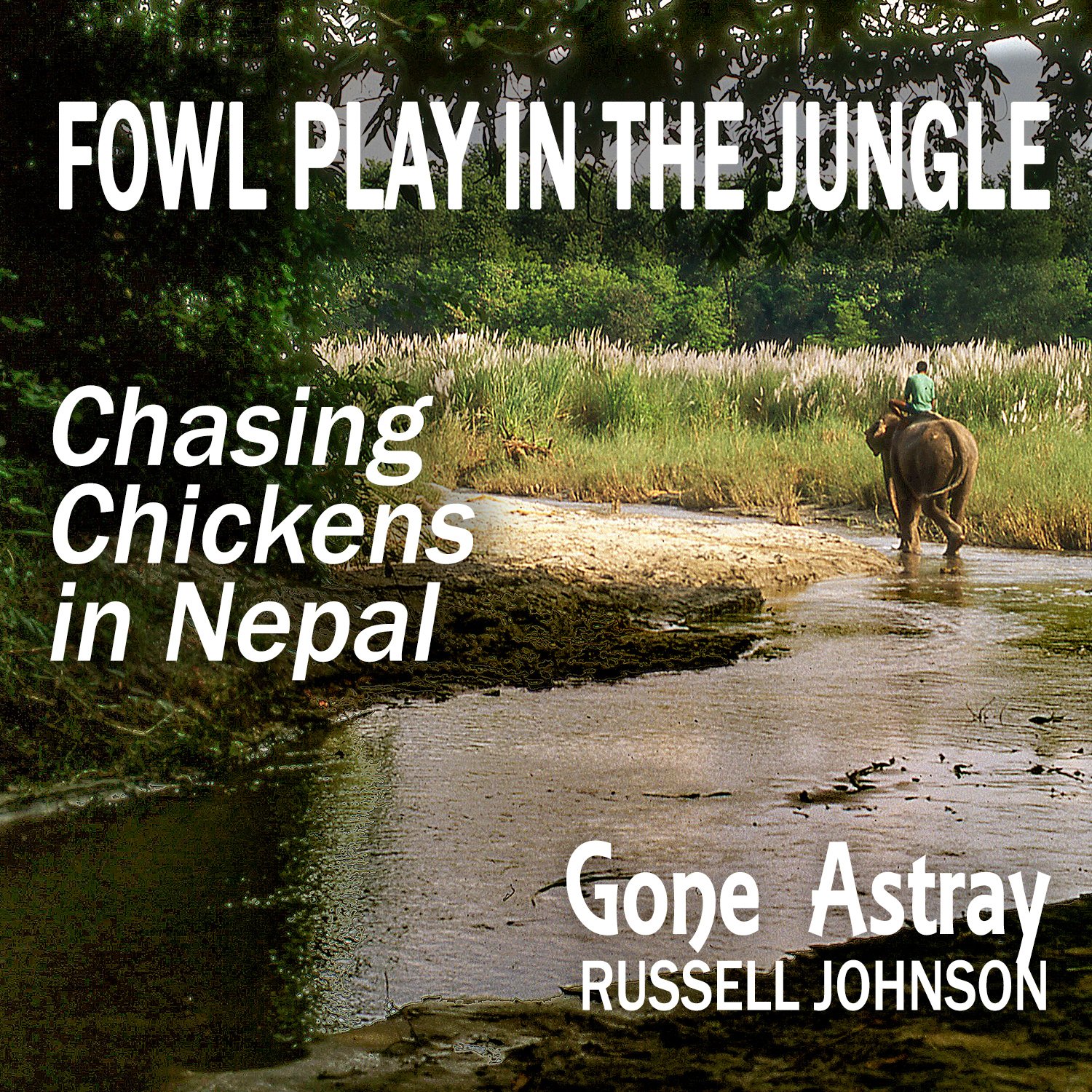 A wild adventure in Nepal’s Chitwan jungle on a quest to film The Mother of All Chickens. Listen to the rumble of elephants, screeching birds and a snake charmer.

An excerpt from the Audio Book Tales of the Radio Traveler, by Russell Johnson, available on Audible.

I am in Nepal to celebrate my marriage and introduce my new bride Pat to a place I have come to love. I first came here for a cultural heritage conference and the last time on a project for the UN Development Programme. I don’t think she knows what she was getting into when she married me, that she would be spending her honeymoon mucking about the jungle on such a lumbering carriage and spending evenings picking leeches off of our ankles, with the parallel goal, this time, of photographing a chicken.

I am feeling my elephant this morning as it rumbles underneath me. On this cool, foggy morning, jungle sounds are tame. No cicada or cricket racket, they’ve taken the rest of the day off. Little sound except an occasional monkey screech or a short stanza from what Nepalis call the “brain fever” bird. It’s song starts with a middle-C whoop and, like a diva gone mad, sails up the scale in a frenetic arpeggio. Mostly, the feel of the sub-audible vibration of the elephant, the rustle of brush. A tiger, perhaps? Or a rhino? Or maybe it is the elusive jungle Red Jungle Fowl, a wildly colorful bird that is said to be the ancestor of the modern-day domestic chicken.

This is not my first safari into Nepal’s Royal Chitwan National Park, on the border with India. I will never tire of returning to a place where I can stand next to a river in a steamy jungle watching rhinos bathe and gaze upon the snow-capped Himalaya in the distance; where I have seen the flash of a tiger in the brush, insects that look like lacquered jewelry, orchids, crocodiles sunning on riverbanks, termite mounds that look like the castles of demented fairies, and a vast buffet of birds – about three hundred species of them – one of which I wish to photograph.

So here I am, jungle junkie, headed out into the tropical tangle with a group of wide-eyed, camera-toting newcomers who seek their first glimpse of the wild rhino and, if lucky, the Royal Bengal Tiger.

My job is to film a chicken.

It is not that the wild jungle pheasant is scarce. It is just that it doesn’t sit still. On my last attempt all I captured were a few fleeting frames of a drab female. What I am seeking is a full plumage, testosterone-charged, ready-to-boogie male for a documentary I am doing titled “Chickens”. I had already interviewed an ornithologist at Cornell University, a professor of semiology who explained that the chicken was actually a vegetable, a cockfight manager in the Philippines,
and Dick Orkin, the creator and voice of Chicken Man, the 1960s spoof superhero radio serial. Now I was going in search of the primal source, the mother hen, the wild jungle fowl, a pheasant that has been established as being the biological forerunner of the common barnyard chicken.

Riding an elephant can be a jolt. But at least we aren’t trotting or galloping. Years ago I rode an express elephant, one enlisted in the service of point-to-point transportation rather than tourism. An elephant trot is guaranteed to rearrange your innards. An elephant gallop will make you backbone feel like a pile driver. Tourist elephants, while nothaving the suspension system of a Rolls, just stroll.

We ride past deeply rutted trees that tigers had used as scratching posts. Tigers and leopards had been spotted several times in the past week. They are not easy to see in the tall grass. Tigers are solitary creatures and a single one may command an area up to eight square miles.

“Scat,”whispers our mahout as he pointed a deposit next to a seriesof paw prints. I resist the temptation to collect a souvenir, fully knowing that might be my closest encounter with the elusive beast.

Our sure-footed elephant climbs down into a swamp. We are second in queue with a wide-angle view of the behind of the beast in front of us. A friend, who had served in the British Navy during World War II, with whom I traveled through this same jungle years earlier, said that elephants relieving themselves in the swamp were like battleships releasing depth charges.

It doesn’t take long to spot a rhino in these jungles. They, along with most other forms of wildlife, have been growing in number because of the environmental controls the government has placed on the park. Royal Chitwan was once a private game reserve where Nepal’s ruling Rana clan treated the British Royals to tiger hunts. Although hardly a noble endeavor, they did keep the area pristine as their own hunting preserve and it didn’t fall victim to the politics and land grabs.

The mother rhino looks curmudgeonly, like a scaly Margaret Thatcher. She snorts and grunts: “You had bloody well keep your distance”. The baby, however, manages to look cute. A ton of cute. We follow the pair as they plough through the elephant grass.

Elephants, thick-skinned though they are, are wary of rhinos. Several times I have sat on top of an elephant that has reared back when a rhino threatened to charge.

I reach for my camera and try to steady it. The elephant isn’t cooperating, however, turning in the wrong direction (I know as an seasoned elephant-back photographer, they always do this). I crane my neck until it cracks. The jungle fowl crosses the path and disappears into the grass. I get another shaky shot of some tail feathers.

Back at the lodge, I shower. A couple of leech bites still bleed, leaving some trickles of red running down my leg. An obnoxious guest I had met earlier comes up to me with a spray can.

“Try this”. she says as she sprays some gunk on
my leg.

“Stop it!” I say, almost losing my temper at the assault, but easing back and taking a draw from my beer.

“It does stop the bleeding, doesn’t it?”

It takes several days for the goo to wear off my leg.

It is late afternoon and I spot some shapes at the corner of the paddock.

I pick up my camera, walk a few yards, get on the ground and start crawling, soldier-style, on my stomach up to a small group of jungle fowl. I aim my camera and make my capture. I had bagged, on video, the chicken from whence all chickens cometh.

We leave Chitwan for the tiny airport at Meghauli for a flight back to Kathmandu. I would have loved to drive the route as it cuts through deep canyons and passes through small villages, but we have a schedule to keep. A celebration in Kathmandu. Some old friends and us, the newlyweds. The King and Queen.

The first time I took this drive, in the early 90s, was just after a new road had been completed. I counted eight accidents along the way including a truck that had driven over a ravine, a motorcyclist lying motionless on the pavement next to his machine circled by a group of men who were just looking, and an abandoned VW van that sat in the middle of the road, squished like an accordion. I was told that drivers were not accustomed to speed and had no idea of the driving limits of a new, smooth road through the mountain passes.

Greeting us at the airport entrance is a snake charmer. I tip him a few rupees ensuring a safe flight.

We drive up to what looks like a movie back lot: a few benches, a free-standing wall with a doorway that simply leads to the other side of the wall. There is a field beyond with men playing football. We are instructed to sit down on the benches with our luggage. Then a man walks through the movie set door and asks us to line up with our bags. Another man runs out into field, which doubles as a runway, and cranks a World War II-vintage air raid siren. The soccer players clear the field and siren-man waves his arms shooing two cows away.

We hear the distant drone of an airplane engine.We walk through the doorway, the man takes our tickets and glances briefly at our luggage. Then we circle around theside of the movie set, back to our benches in the “lounge”. The Lumbini Airways prop plane bounces and sputters to a landing. Nearby Lumbini is the birthplace of Buddha and I was assuming that the Lord Buddha himself had blessed this two engine puddle-jumper. Up from our seats again and out the door.

We board. Pat flies on business regularly, she even took a few lessons in flight school, but is still a white-knuckled passenger. We both chug down a beer and she sinks her fingernails into my arm, as a tiger would a tree, as our plane lumbers down the field past an audience of footballers and insouciant cattle. The cockpit door swings open and we see the pilot impatiently tapping his feet. We grind higher, clearing some small mountains, over lush terraced farms and rivers, small villages, finally passing over the sprawling outlying slums of Kathmandu.