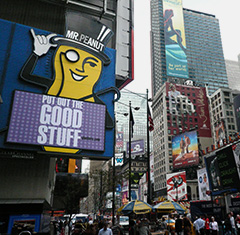 NOTE: I wrote this story in 2006. Now, in 2020, it appears that Mr. Peanut is being killed off in a Superbowl Ad. My prediction is that the announcement is part of a PR campaign that would make Max Bialystock proud.

Mr. Peanut, with top hat, tails, white gloves and monocle, is a Broadway kind-a-guy. His salty self first appeared on the Great White Way in 1942. Peanut staged a comeback in 1999 and now occupies a huge billboard. Probably deservedly so as he is the official snack of NASCAR.

Endearing old Mr. P., the Fred Astaire of legumes, offers me comfort in this place in America where new, garish symbols scream loudest. These glaring jumbotrons, this neon nouveau may be the rule in Tokyo, but few other places in the US would tolerate this storm of lumens and hype. Times Square has always been itself a symbol: GIs smooching with their lovers at the end of WWII, urban sleaze through the 70s and 80s, and beginning in the 90s. big media belting it out like Broadway stars: “Look at me now!” Disney, ABC, MTV, FOX, ESPN gazing with kinescope eyes on America’s square. Little kids screaming to dad, “I wanna be on TV, waaaah!” Reuters stringing out its news sausage ticker along a billboard while Conde Nast editors peer down from their tower and sniff. Even little Air America, the liberal talk show network, has a sign: “We need to talk,” it says. Aside from Conde Nast, not a lot of media is really located here. Like NASDAQ, which commands a corner of Times Square but really exists only in the abstract world of hard drives, it is all hype and mirrors: propaganda with location, location, location.

Mr. Peanut is now “intellectual property” owned by Kraft, even though Planter’s Nut and Chocolate Company bought him for $5 from a 14 year old boy in 1916. After a kerfuffle with media giant Clear Channel, a huge anti-war billboard commands a corner on Broadway near an Army recruiting station and an exhibit by the Drug Enforcement Administration. Even “Off Broadway” is consumed by current events. “Eat the Taste,” by the creators of the hit Urinetown, is about an unemployed John Ashcroft trying to make it as a Broadway hoofer and a Karen Finley takeoff on “Who’s Afraid of Virginia Woolf” called “George and Martha” imagines the unimaginable, a tawdry affair between George W. Bush and Martha Stewart. The thought of Martha smearing Dubya with chocolate is disgusting, to say the least.

I suffer from nostalgia, however, walking around this neighborhood. Even though it too is symbolic, from my memories of old movies and songs. Once I sat alone at an 8th Avenue deli, just off the square, and listened to a young actor pleading with his agent whose only encouragement was to take more classes. Having once hosted a showtunes program on the radio and watched dozens of movie musicals and a few on Broadway, I really know these people. In my dreams I have danced with the best of them. In my nightmares I have strutted with my fly open and fallen into orchestra pits.

Last weekend my wife and I got a taste of that nostalgia, a revival of Comdon, Green and Leonard Bernstein’s “Wonderful Town,” a cliché story, for sure, of a pretty young thing from Ohio and her gawky sister played by Brooke Shields, trying to make it in the big city. But great songs, some tearful nostalgia, and Brooke Shields, who may have a future as a comedic actress. She is clumsy in a long-legged good way, like a giraffe attempting ballet or like Lucille Ball, another beauty for whom a lack of grace is very funny.

So a tip of the top hat to Brooke Shields, Mr. Peanut, the Great White Way and Times Square. Some of its symbols will change. Some, happily, will stay the same.