Autonomous Robots in the Desert (Video)

A Million Bucks: a pittance for the Pentagon, half the cost of one Patriot Missile, by some estimates. Enough, however, to pit big science and industry against a hodgepodge of entrepreneurs, high school students, geeks and grease monkeys in a challenge to design a 21st Century “My Mother the Car.”

This is the tenth anniversary of the DARPA Grand Challenge. In 2004 the US Military offered a million dollar prize to anyone who made a vehicle that could drive itself from Barstow, California to a casino near Las Vegas without any help from human beings. We were there for what became a rather zany race.

The DARPA Grand Challenge, a project of the Defense Advanced Research Projects Agency (which brought us the Internet and studied gecko feet with the aim of empowering soldiers to walk up walls), commandeered a roadside saloon and corral called the Slash X near Barstow, California as the starting point for what was supposed to be a race to across 142 miles of Mojave to Buffalo Bill’s Casino in Primm, Nevada near Las Vegas. Once out of the gate the vehicles would be on their own, with no human intervention allowed except for a DARPA-controlled stop switch (good idea as one robot weighed 16 tons). Marines were stationed along the route to ensure that no desert tortoises became robot-kill. 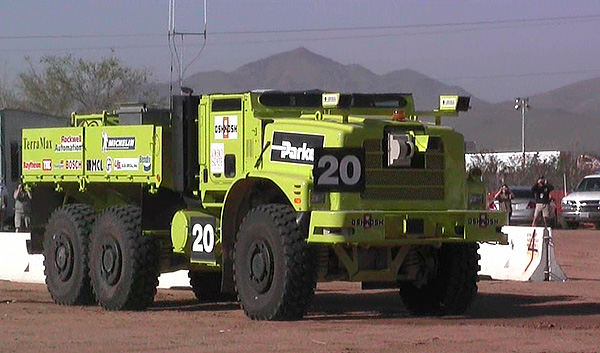 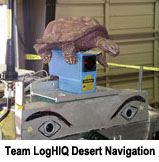 Of the 25 vehicles that qualified, only 15 rolled to the starting gate and only three negotiated past the first brown mile. One bot caught fire, one ran around in circles, another crashed into a concrete barrier guarding the press corps, one got tangled in a wire fence which it managed to wind around its axles, while others experienced “senior moments” and  just wandered off into the desert. The favored entry, from Carniegie Mellon University stalled after 7.4 miles after it hit a rock.

Nobody pocketed the million and nobody was expected to, according to Air Force Col. Jose Negron, DARPA Grand Challenge Program Manager.

“Robot planes are easy,” says Negron, “they don’t face obstacles other than other planes.” A ground vehicle in the desert, on the other hand, has to face cacti, tortoises, rocks, washes, canyons and maybe even a few UFOs and dead mobsters.

Here is a video we shot at the starting gate.

In 2005, DARPA raised the stakes to $2 million and five teams, including the monster truck, completed the course. A Stanford University SUV named “Stanley” took the prize with a winning time of 6 hours, 53 minutes.

In 2007, the DARPA Urban Challenge put contenders in a mock urban environment and the latest contest, in 2012, focused on humanoid robots for emergency maintenance.

In March of 2014, a group a group of the original participants are having a reunion in Las Vegas.