Cancun, Mexico or Deja Bu All Over Again 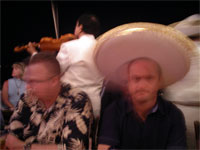 Ok, excuse the French/Yogi Berra pun but it’s the tequila talking. I have drunk here before, even though I physically haven’t.

I am in a restaurant/entertainment venue called Carlos n’ Charlie’s in Cancun, Mexico. If you have been to one of Mexico’s tourist enclaves, or Los Angeles, or New York, or any larger US city in the 70s and 80s, you have probably been here too, in spirit(s). Years ago there were lots of like establishments around. Thrift shop junk like old telephones, saxophones and posters adorning the walls, a stratum of peanut shells covering the floor like the skulls of dinosaur-chomped voles, and teeshirts for sale celebrated super or perhaps sub-human feats, usually associated with the consumption of alcohol. And while most of these places have faded in the US, they still live in party lovin’ Cancun.

I first visited a Carlos ‘n’ Charlie’s in Acapulco in 1982 and see no change whatsoever since then: loud rock ‘n’ roll and fun-Nazi waiters dispensing yard-high glasses of watered down tequila. And although I consigned my single Jimmy Buffett record to a thrift shop years ago, I do confess I enjoyed myself. There is (or maybe is) something to be said about music with beat but no message and gobs of artery-busting cheese washed down by a wiccan’s cauldron of mind numbing liquids. Maybe it is the kind of angst that induces other males of my age to get nose rings and buy bright yellow roadsters, but I have decided that what I have been missing out on, and what I found here, was good, dumb, non-critical fun. 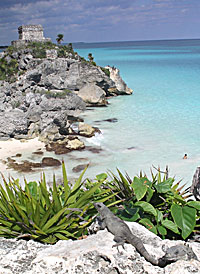 That’s Cancun. Nothing green or sustainable about this place, folks. It is beach chair, drink ’til you drop tourism for the sake of tourism. The only wildlife near the hotels are the fat, lazy iguanas that lie on the rocks around the pool. But I can’t really wag my head about it. Mexico was textbook poverty in the late 60s and high-falutin’ tourism was thought of as a good alternative to high-pollutin’ industry. The Mexican government put millions into Cancun, and it worked, benefiting thousands of Mexicans who work and live here under decent educational and health conditions. Unlike Mexico City or bordertown dumps like Ciudad Juarez, Cancun imports rather than exports jobs. Tourism has destroyed some coral reefs. But there are concerted efforts to save others and its beaches are glorious white powder sand.

Cancun is clean and safe and there is good quality dining to be had, even though much of it consists of locally owned franchises of international chains. One local place we liked was La Destiliria, with wonderful refined Mexican cuisine and a museum dedicated to, what else, tequila.

But there are places for those like me who don’t drink all night and sleep all day. This is the Yucatan peninsula and magnificent Chichen Itza, with its Mayan temples and pyramids is only a short drive. South of Cancun, on the coast, the smaller seaside Tulum heritage site is extremely well managed, without the touts and annoyances you find in many such places. Tulum has knowledgeable English-speaking guides, who will tell you, among other things, how the Mayas got their calendar straight long before the Popes did.

Nearby is Xcaret, touted as an ecotourism park. It is a large compound but it lives fairly well up to its hype. We were treated to some Marimba music at a seaside lunch of fresh fish, farmed from the ponds of this ecoland-by-the-sea which also raises sea turtles for eventual release and endangered birds, some of which have more beautiful feathers than voices. Bwraak!

You can also snorkel here through seacaves and, in a controlled manner, explore spectacular coral reefs without touching and ruining them. And check your suntan lotion at the gate if it is not bio-degradable. 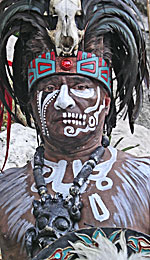 You can spend an entire day here visiting nature displays, a coral reef aquarium, an island where jaguars and leopards roam.but not too quickly. The two we saw were fat and jowly, like spoiled housecats. You can also see a horse show with trick riding and roping accompanied by a mariachi band.

Xcaret may not be ecotourism in its strictest sense, but as theme parks go, it is a gem offering a full day of self-guided, nature-based activities that end in a performance choreographed by Mexico’s ballet folklorico.

So, despite Cancun’s tainted reputation as a spring break, party into the wee hours destination, I enjoyed my short visit. It was a clean place with decent dining and some well-managed heritage sites nearby. Even if mornings I sometimes looked like one of the wrinkled, lethargic iguanas next to the pool. But, maybe they weren’t iguanas but just other morning-after guys like me.