Old world Europe. Where do you find it outside of faded movies these days? Where do you find the heart wrenching chanteuses, the gypsy violins, the grand baroque cafes where you can pine about the meaning of life and nibble on cakes.

If you want that old feeling…go to Budapest.

Budapest is a czardash. A czardash is a Hungarian music form that is, to say the least, dramatic. It starts on a minor key — feeling the pain — but things do get more chipper. Sort of like Hungary, itself. Hungary has had it share of pain, not the least of which was caused by Joe Stalin. But it has survived and is, I think, one of the prettiest cities in Europe.

Budapest is on the Danube and the best way to arrive there is by boat…for the views.

The city is divided by the river flowing between Buda and Pest. Buda is the historical part of the city. It is dominated by castle hill and Matthias Church which shares the peak with a monstrosity of a hotel, a building that looks like an off-the-strip $17 a night Las Vegas special. What it is doing in a UNESCO protected historical area is beyond me. This is a stunning little neighborhood, though, the kind of place we would all like to live full of galleries, museums and cafes and sweeping views of the Danube from what is left of the oft rebuilt castle.

I like the heart of Budapest across the river in Pest. I paid a couple of visits to the old iron market. I love these old, ornate Erector Set buildings all over the world. This one has been beautifully restored. This is not tourist side show but is still a working produce and meat market. You don’t see many international licensed brands here, imposing their garish signs, simply strings of sausages, goose livers, necklaces of paprika and neatly arranged vegetables that look like the illustrations in a Beatrix Potter book. I halfway expected Peter Rabbit to peek out from behind a cabbage.

Walking down a normal street in Budapest, you see that a lot of old buildings have retained their facades but are modernized inside. One was a home and garden store, like a Home Depot, with stone busts of what were undoubtedly a pair of wise, bearded master plumbers over the door.

Hungarians love their coffee houses. I walked from the market down a pedestrian mall past café after café of people sipping coffee and taking in the scene. If you are old enough to remember Zsa Zsa Gabor, there are an amazing number of bombshell Zsa Zsa lookalikes,some I am told, working girls. One with huge sunglasses dangled her well-exposed thigh onto the walkway so that no one would miss it. She was accompanied by a man who looked like Auric Goldfinger, the James Bond villain, wearing a red sport jacket.

The mother of all Budapest coffee houses is Café New York. There is a term in German to describe gaudy. The word is versnorkled. 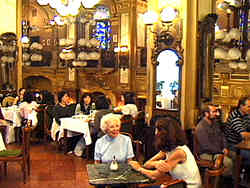 Café New York’s versnorkleness rivals Louis quatorze. Its gaudiness will make you gasp. It was opened in 1894 and its frescoes were done by leading painters. It was a place where the artistic and the elite met. After the War, the Stalinists made elite a nasty word, however, and it became a sporting goods store. Now it is back to being the New York Café…worth a gasp, a coffee and a snack. The outside is a mess, smashed into by a tank in 1953 and has really never been repaired.

Hungarians do not lack for music. You hear it everywhere from local fiddlers and czardash singers, to gypsy concerts from the Hungarian State Folk Ensembl, to classical music. Those discount classical music CDs you buy are very often recorded by Hungarian orchestras.

Hungary also makes very good wine, which is increasingly finding its way to world markets. Good of course for proposing a toast to wine, women who look like Zsa Zsa and song, which is always in the air in Budapest.