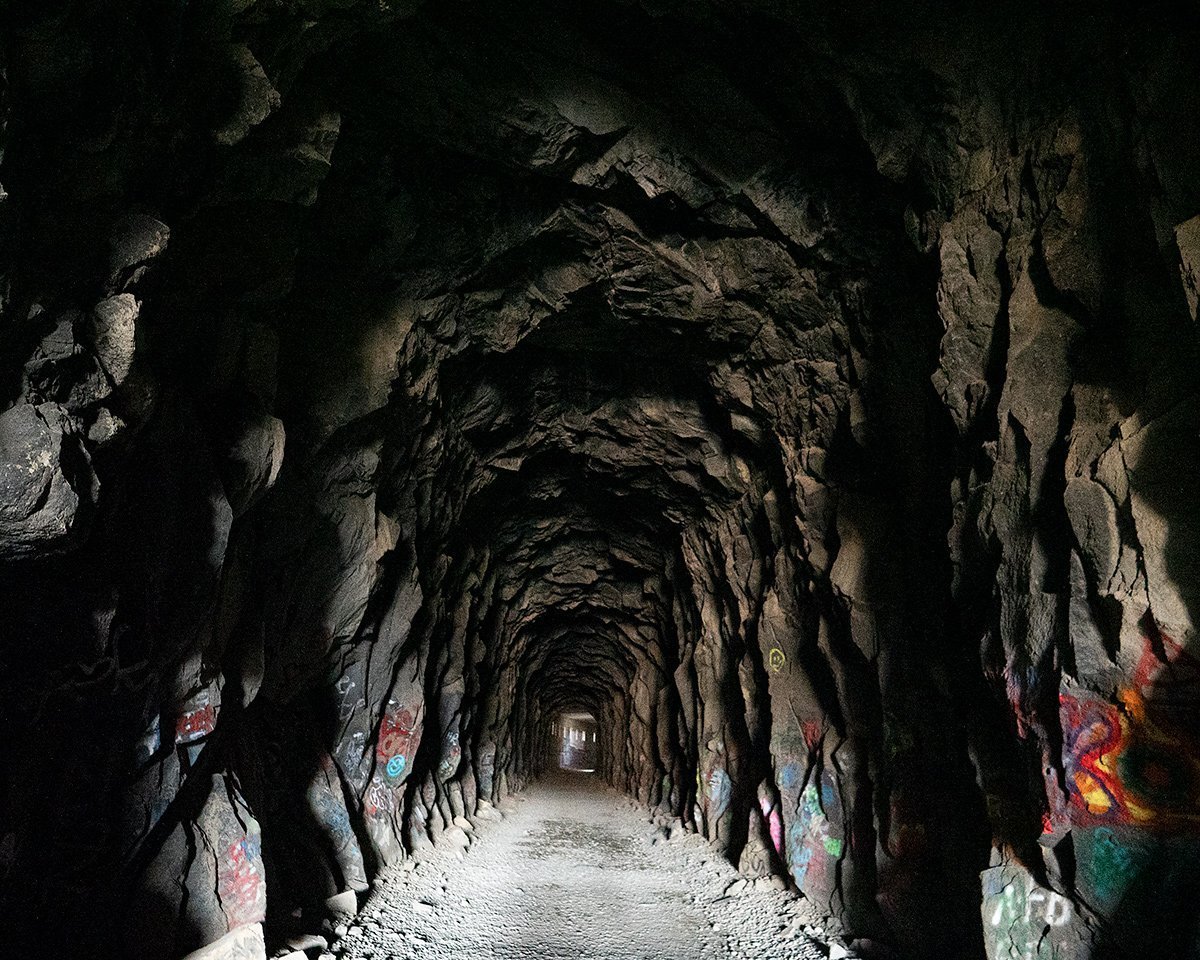 Do we dare enter? It looks spooky.

It has bats, I’m sure, but it’s daytime and they’re probably asleep digesting last night’s flies.

Actually, we are at Donner Summit, entering one of the abandoned tunnels where the first transcontinental railroad crossed into California. It was completed in 1867 and the first train steamed through in 1868. We took a sort of spooky walk through the present into the past.
This project, to run trains across the Sierra near the place where the Donner Party was stranded and forced to eat one another, was considered whackadoodle by most, except for a railroad engineer named Theodore Judah, aka “Crazy Judah.” Judah not only designed the almost impossible, but got it financed and lobbied it through Congress. He went to a group of Sacramento rich guys, Charles Crocker, Leland Stanford, Collis Huntington and Mark Hopkins, often referred to as The Big Four or The Nobs, to finance the Central Pacific Railroad. The line started in Omaha and ended Oakland. The Nobs built their mansions on Nob Hill in San Francisco. Judah died on a trip trying to get new financing to buy out the Nobs, but his name was honored by a mountain in the Sierra and a street in San Francisco along with its attendant street car line.

The tunnels took 15 months to build, drilling by hand with the help of black powder and nitroglycerin, which killed a lot of workers, 90% of whom were Chinese.

The last train passed through in 1993, after which they were rerouted through a new tunnel.

Now, the abandoned tunnels are the paths of trekkers and graffiti artists.

If you want to visit, it can be as much as a five mile hike, in an out, but you don’t have go the whole way to get the gist of it. From the trailhead you can traverse the first tunnel, a second shorter one and part of the third, which is really long.

Bring a flashlight or headlamp and waterproof shoes as it can be quite wet and puddly.

There are no signs leading you to the trail head, but our GPS found it. There is a little parking lot just off Donner Pass road near Sugar Bowl road.

That is the easiest route, but there is another option before you reach the trailhead at a location called the China Wall, where there is a historic marker honoring the Chinese workers. It requires what to some might be a challenging hike up a wall of rocks.