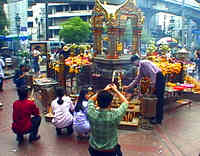 This is a very intense place in heart of Bangkok. It is called the Erawan shrine, named after a hotel that once stood here. It is not a tourist spot.

The workers building the hotel received mysterious injuries so the owner built a shrine to appease the Hindu god Shiva. If you know anything about Shiva, he/she/it is not to be messed with.The hotel is long gone, but the Erawan shrine is still there.  Thailand may be devoutly Buddhist but Thais still come here in to lay their offering in front of this scary god of destruction. The Thais have always been ones to hedge their bets. There is an expression here: mai pen rai.” It means no big deal: if it works, do it.

King Mongkut (Rama 1V) who was inaccurately portrayed in The King and I, wisely decided that the Thais didn’t necessarily hold a monopoly on wisdom, so he borrowed the best of other cultures. Forget about chopsticks in Thailand. Forks are the rule. So this Hindu shrine remains in this Buddhist city taking up one of the most valuable pieces of real estate in Bangkok, in the midst of five star hotels and embassies.

Up above it is the best thing to happen to the Bangkok since the advent of chili peppers. The Skytrain system and an expressway, built in advance of the Asian games a few years ago, have much diminished Bangkok’s reputation as a traffic-clogged nightmare. I used to have to allow two hours to get to the airport. Now, it’s a half-hour. I used to hole up in a hotel next to the river and just stay there, not having the patience to sit in traffic for hours. Now, for a few cents, you can get from the river to shopping at Siam Square or the World Trade Center the exhibitions of questionable morals and knockoff watches in Bangkok’s fabled Patpong district in just a few minutes. 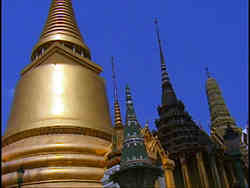 For just a few cents, you can take a Bangkok water taxi along the Chao Phrya from one of the fancy hotels such as the Oriental or the Shangrila to the Grand Palace and the Temple of the Emerald Buddha.

If I were to choose a sight that truly symbolized Oriental mystique, this complex of temples would be it. I was gobsmacked the first time I saw it. It reminded me of the space city of the Emperor Ming in the old Flash Gordon serials. I have seen most of the major temples of Asia. This is one of the most striking.

Next door, is Wat Pho, the largest temple in Bangkok. Thailand takes its Buddhism very seriously. You can get a year in prison for impersonating a monk. Monks gone bad are big news. Almost very time I am here, the front page of the Bangkok Post has had a story about some errant friar. This time, one was caught in a Karoke bar wearing a wig. Once a monk commits an unmonkly act, he is officially deemed no longer a monk, on the spot, at the instant of transgression. He is therefore impersonating a monk and can be sent off to the pokey. Wat Pho’s most magnificent sight is its reclining Buddha –140 feet long — covered in gold leaf. But, its real attaction may be its famed massage school where you can experience the massage of a lifetime for about 7 dollars.

Bangkok is still a bargain by western standards. I always stay in 5 star hotels there, because I can afford it. Prices have gone up over the past few years, but I can still score either the fabled Oriental or the Shangri-la, both on the river, for less than $200 a night. Cabs are a dollar or two to most places. You can have a meal at a local restaurant for the same price as a glass of beer at a major hotel. A couple of my favorite places are Harmonique, a family owned restaurant near the river filled with antiques, and the Fish Market where you wheel a shopping cart around and take your pick of the catch of the moment and watch a room full of chefs cook it to order.

As for Thai boxing, its like a lot of other things in Thailand: everything toes, arms, legs, you name it.