“It is India without the hassle.”
Arthur C. Clarke

I could see what he meant about his adopted country. The people are fine featured, well educated, and it doesn’t take five of them to complete a simple task. You see poverty but it doesn’t grate at your conscience in scenes of maimed beggars. And once out of the capital city of Colombo, the world dissolves into a lush green dream. Banana and pineapple, teak forests, queues of brightly colored umbrellas bobbing through rice fields. Elephants blocking traffic.

Sri Lanka has some of the best protected wildlife preserves in the world. The first recorded one dates back to the 3rd Century B.C.

I stopped at an elephant orphanage and watched a herd bathing in a river. It was led by a curmudgeonly bull who snorted elephant ephitets when I violated his space. I raised my camera to take a picture and heard hissing behind me. I swung around to make eye contact with an enormous reptile. This was not the gecko on the shower stall. The monitor lizard looked to be about five feet from his first lethal incisor to the last bony plate on his tail and walked with the gait of a constipated pit bull. It “monitored” me, (rolling its eyes like Groucho Marx) dismissed me as a wimp and not worth the trouble, and swaggered away.

ve on and beautiful young women beckoned me.

They sold me cashews, oily and sensuous. I whiffed sandlewood and vanilla and spices. I brushed by Kandy and the Temple of the Tooth (the Lord Buddha’s) and where I lodged at the musty but marvelous old Hotel Suisse. It had grand hallways and huge rooms with shutters that swung open and a circular bar tended by a gap-toothed man with greasy black hair slicked back over his ears.

Kandy, situated beside a lake in the hills just below the center of Sri Lanka, is the country’s cultural center.

Temple of the Tooth
The Temple of the Tooth is said to house a relic from the mouth of the Lord Buddha, himself, which was said to have been taken from the flames of his funeral pyre and smuggled to Ceylon in the hair of a princess. The Tooth was pirated to India by an invading army but brought back. Then Catholic zealots stole something they thought was the tooth and destroyed it when the Portuguese captured Kandy. But the Sinhalese claimed it was a false tooth and that the original still rests inside the Temple of the Tooth. The temple was constructed during the time of the Kandyan kings in the 17th and 18th centuries. 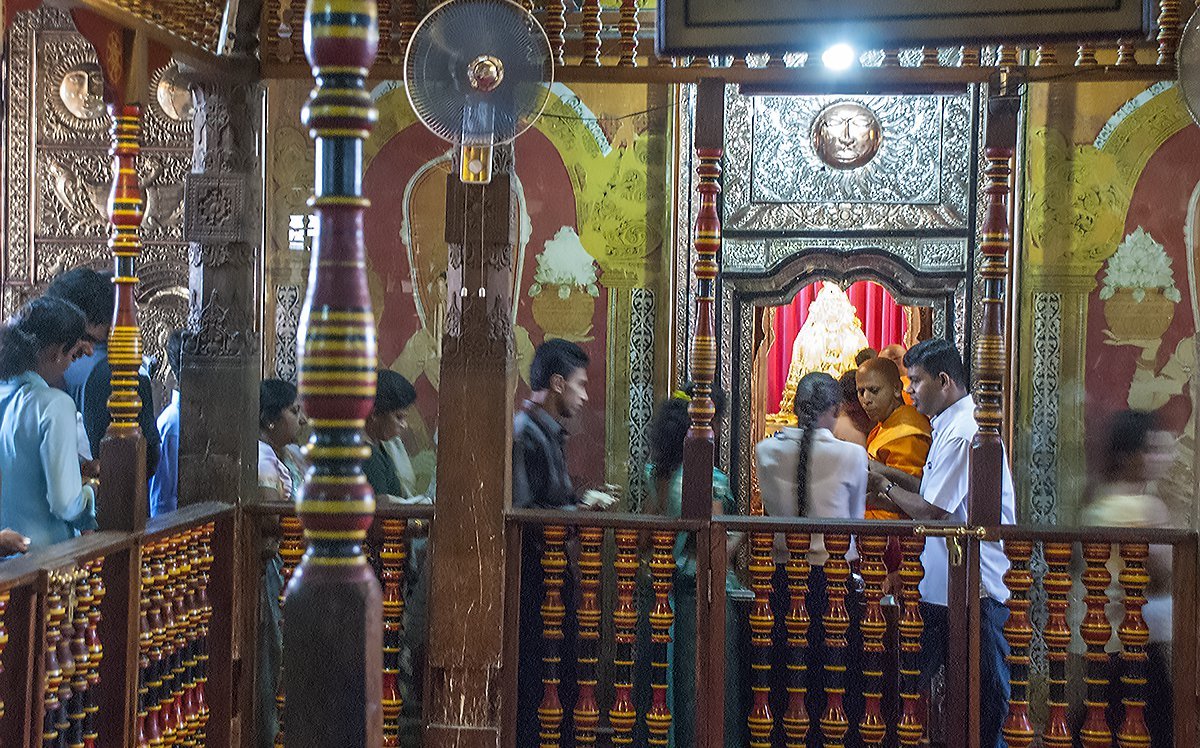 Lining up to worship at the Temple of the Tooth in Kandy, Sri Lanka

Festival Time
Sri Lanka’s grandest celebration, the Kandy Esala Perahera, takes place each year in the month of Esala (July or August). It is a ten day fest which ends on the night of the full moon with a procession of drummers, dancers and elephants led by the Maligawa Tusker, a giant dressed to the nines carrying a canopy which shelters a duplicate of the reliquary of Buddha’s sacred tooth.

I went to Sri Lanka’s “cultural triangle”, the ancient cities of Anuradhapura, Mahintale and Polonnaruwa, and walked in the rain amongst acres of some of the most inspiring Buddhist heritage sites I have ever seen.

Now I know why my Sri Lankan friends — who have lived the fois gras of New York and San Francisco and Singapore — all say they want to go back to their villages to retire.

But Colombo, Sri Lanka’s capital city, does not evoke such images. The Singapore Girl who sat next to me on the plane rolled her eyes (like Groucho the lizard) when I asked her about it. It is noisy, petrol-stinky. Driving requires a sort of entrepreneurship endemic to South Asia. My driver leapfrogged smoke-spewing busses, nosing back to the proper lane barely in time to avoid trucks that came roaring from the other direction blasting warnings from their airhorns. We slalomed around circuses, leftovers from the Brits who claimed this as one of their outposts (along with the Dutch and the Portuguese). We drove past police checkpoints, reminders of a civil war that despite cease-fires and periodic bursts of optimism still nags and kills. “Our little problem,” as Sri Lankans call it, has had little direct effect on travelers aside from scaring them away. We dodged past statues depicting, in the European tradition, Great Leaders gesturing their right hands into the air like opera singers belting arias. One G.L. had enormous ears. 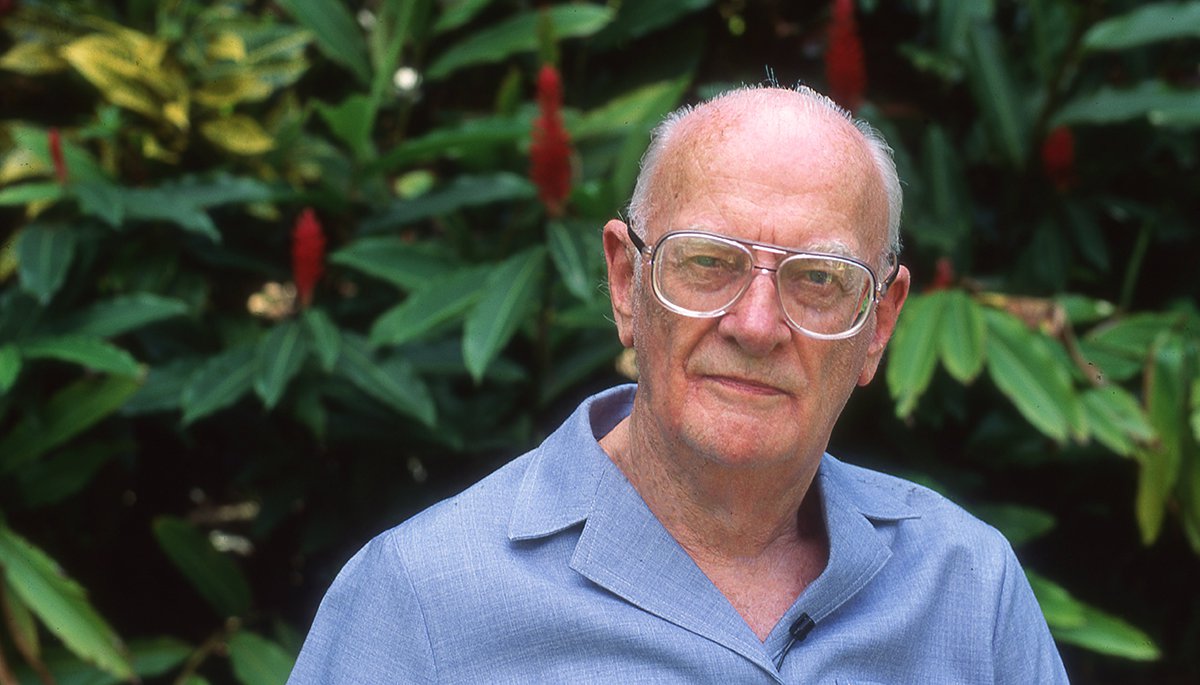 Arthur C. Clarke lives in a neighborhood called Cinnamon Gardens where, as in many matured cities, fashionable homes have been converted to embassies, advertising agencies and schools. Leslie’s House, named for Clarke’s late longtime companion, is located next to a girl’s school. It looks as if it has been a work in progress for the thirty some years Clarke has lived here. Modern appendages clash with colonial charms. A garden in back has served as his salon for the world of good men and great who have come to call. Friends such as the late Issac Asimov who wrote him a limerick:

Clarke says he is especially fond of the time he spent with American newscaster Walter Cronkhite and the good old “man-on-the-moon-days” when together they shed tears on first touchdown.

“I hope you are not intimidated.” said Clarke as I entered his office. He was referring to the yipping chihuahua that charged toward me.
Pepsi skidded to a halt about three feet away.

Clarke introduced me to the tiny beast he originally named Pepe. His Sri Lankan friends couldn’t pronounce it, however…always adding an S. So the name of the cola stuck. Clarke got up from his chair and called Pepsi. The dog hesitated a moment and came to me instead. I have a extreme negative predisposition to two animals on this earth: monkeys and chihuahuas. When I was a child, my best friend owned a shrewish little mutt that made shreds of several of my pantlegs so I expected the worst. Pepsi, however, was more like housecat. He nuzzled my hand when I leaned over to pet him.

We walked into the garden and talked…

Clarke’s mind moves like a ballet dancer, jetéing from one subject to another, but always returning to earth in the right spot.

“I’ve been fascinated by virtual reality, in fact, I am using it in a book I’ve just done which is about space exploration, eventually tourism, on Mars which we can already do in virtual reality, in a sense, because we already have beautiful maps of Mars and we can treat them with virtual reality programs and show Mars as it will be when its colonized in a thousand years time or so and has an atmosphere and water. That will be a great place for tourism in the next millenium.

But virtual reality does present problems and challenges and indeed dangers.

There is an old idea in science fiction that when we have virtual reality or what has been called the “dream machine” and when we can experience or think we can experience something that is indistinguishable from real reality, then why should we bother with reality? Why not just lie and enjoy anything you ever wanted to do and become a sort of ultimate couch potato.

I remember vividly a story more than fifty years ago called “City of the Dead” by Lawrence Manning. The people were apparantly dead but they were all plugged into their own very private universes having a wonderful time. What will happen to society? Who is going to change the lightbulbs?

Its a real danger, in fact its already started to some extent. The weapon which has doomed the human race is the remote controller because it has removed the last need for any exercise. Ultimate reality will be the last straw.”

“In your edited virtual reality, all of the nasty things will be removed, the mosquito bites which maybe give some extra dimension to the experience…the discomfort as well as the enjoyment.”

“For the near future…lets say until 2,001, virtual reality isn’t going to be anything like the real thing…if it ever is…so people will want to travel.”

” I can see robot tour guides going to very dangerous areas like going down into volcanoes, going to the deep and interacting with people through virtual reality.”

TRANSPORTATION TECHNOLOGIES
“We already have all the transportation we need on the ground…and we don’t want to go too fast anyway…because we want to see the scenery around us. Here in Sri Lanka we have an old Viceroy special train going up into the hill country and eventually right through the tea plantations…a wonderful way to travel.

If you are in a hurry to get from one place to another and you don’t mind being put into a jet-propelled cattle truck, sometime in the next century we’ll have transsonic transportation several times the velocity of sound and maybe even one day orbital transportation: pole to pole in 45 minutes. But that will always be expensive and noisy and damaging to the environment. There won’t be another quantum jump for transportation on this planet as there has been in the last half-century.”

THE ENVIRONMENT
“There’s a beautiful bay in Sri Lanka that I love and that I’ve written about a great deal and as a result, tourists have come there and they’re talking about building hotels there so I feel guilty of destroying the paradise that I discovered and described. On the other hand, one mustn’t be selfish. We can’t protect bits of wilderness for ones own personal use. Of course the big problem is that there are just too many people on this planet. Thats the answer, you have to reduce the population of the planet. I think the optimum population of earth is probably less than a billion people.”

TECHNOLOGY & THE WORKFORCE
“There may be very few jobs that require highly-skilled and educated people and most of the public will have to become consumers. I know a science fiction story by Frederick Pohl many years ago about a society in which you were compelled to consume so much — the very reverse of the present — and if you didn’t use up your quota of material and wear the number of suits you had to wear and eat the number of meals you had to eat, you’d be in deep trouble. The answer, if there is an answer, has to be in education, and there I put a lot of hope in the new technologies, the satellite technologies which can, in principle, educate people although, I am afraid, all too often they don’t.”

CULTURAL BACKLASH TO TECHNOLOGY
“I am sure it is already happening, in fact much of the religious fundamentalism which is endemic now in America…fundamentalist groups there…and of course even more violent in Asia are possibly a reaction to technology.”

THE TRAVELER OF 2020
“I hope that by then space tourism will be getting underway…certainly to orbit…and that is going to be a big thing in the next century…and lunar tourism may also be beginning.”

Following talk and tea we headed back to his office. He wanted to show me a computer program he was using to landscape Mars the way he thought it would be when it was colonized. I had a 3D modeling/virtual reality program on my laptop. We were a couple of little boys comparing captured bullfrogs (You show me yours, I’ll show you mine.) Clarke talked about his friend Mandelbrot and fractals (which I have yet to grasp either technically or spiritually) and rendered one Marscape after another.