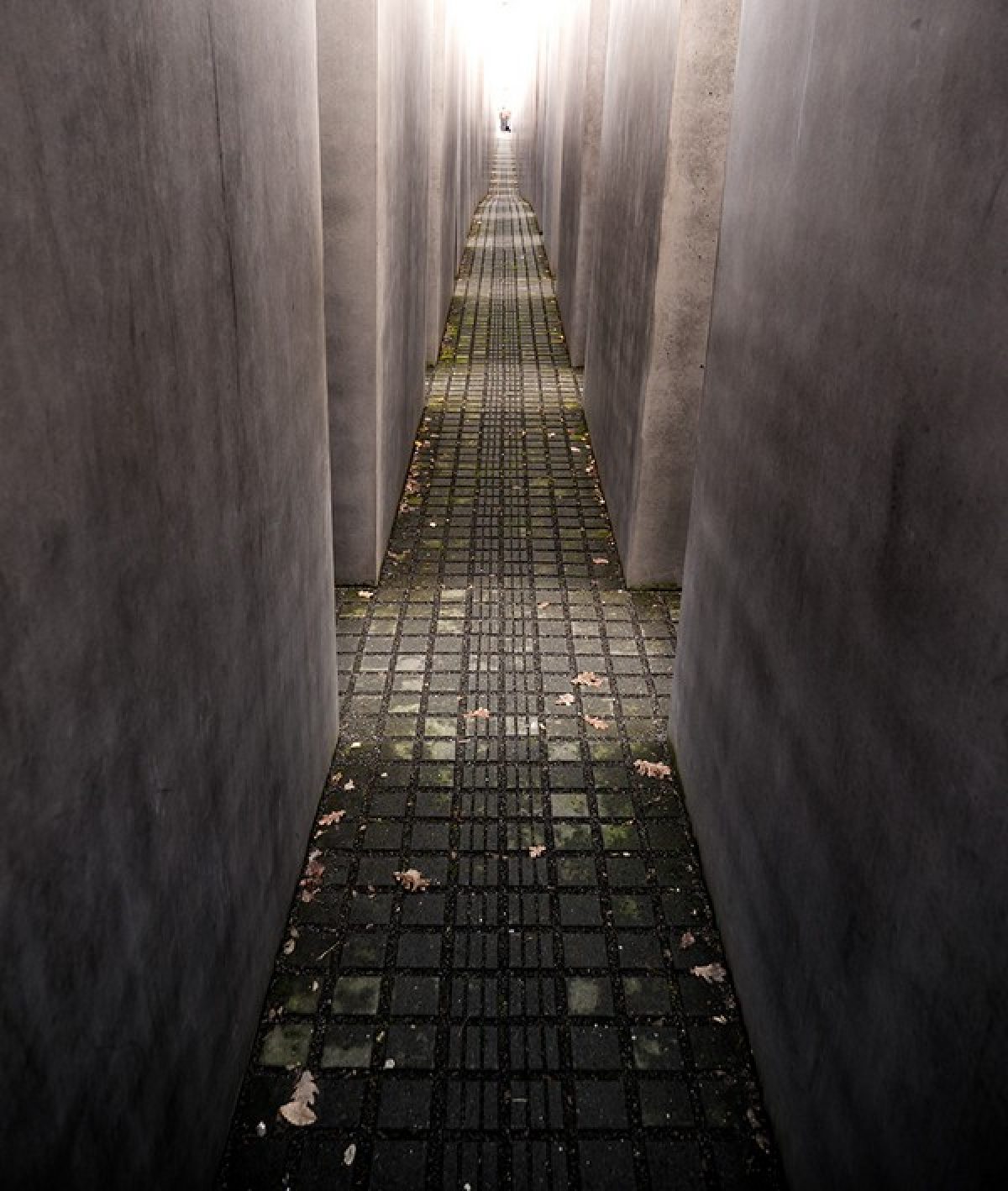 From the warm comfort of my Berlin tour bus I watched people gradually disappear as they descended the undulating paths between the gray block stelae that stood like some alien stone city,  but nothing could prepare me for experiencing the Holocaust Memorial first-hand on-site a day later.

It was cold and gray when we toured the massive city. Berlin’s Memorial to the Murdered Jews of Europe is a 4.7 acre city block filled with what looked like seven-foot by three-foot concrete tombs, 2,711 in all, installed on an undulating lot is located near the Brandenberg Gate. No one’s name is inscribed on the vertical stelae slabs. But by not calling out the individual names it honors, all who were the victims of oppression.

The memorial had its start in 1989 with early donations. 528 proposals were submitted for review with two winners. Both of whom were rejected by Federal Chancellor Helmut Kohl in 1995. Two years later some 27 architects and sculptors were invited to submit their ideas and by November 1997 American Architect Peter Eisenman’s plan was chosen and building began in 2001. On May 10, 2005 the Memorial opened officially and within the following year about 3.5 million visitors came to the Field of Stelae and almost a half million to the subterranean information center.

Cameras in hand, my husband and I studied the harsh winter light and stark shadows the slabs cast. I wandered between, down a path. Light, dark, flat, edge, hard…nothing gentle or soft I was about to remark to my husband, but he was nowhere in sight. The stelae were now as tall as I and I could only look ahead, or right or left. No overview of where I was.

A figure flitted swiftly across a channel of light some 10 yards away. Did I know them? I called to my husband. No response. Was he headed off in an entirely different direction shooting pictures in another part of the memorial? I couldn’t tell. I heard my footsteps crunch in the chamber-like spaces. Another person silhouetted, crouched against a dark gray wall. Maybe another photographer. Maybe someone remembering…something or someone. Or maybe it was just someone taking a rest, catching the sliver of sunlight.

I feel a slight bit of panic. I’m used to knowing where I am. Almost six feet tall I can survive the densest crowds of tourists and shoppers and have even been called on to spot a friend’s husband across a bustling department store. But Eisenman and engineer Buro Happold who designed the memorial knew what they had created here. The anonymous gray blocks closed me in and separated me from my husband. I had neither perspective nor information to make a decision where I was to go next. So I moved on. I had to.

As my pace quickened the shadows began to lighten, the stelae were shrinking below shoulder level and I encountered a film crew and saw just beyond them the friendly sidewalk and welcome bustle of traffic. Normally my curiosity would force me to stop to ask what they shooting but this time I was just relieved to be able to take a look around. My husband emerged just at the same time a few rows beyond. The winter sun felt good on my face. I walked over and embraced him and I was grateful.

Here is a video my husband shot that offers a hint of my experience.