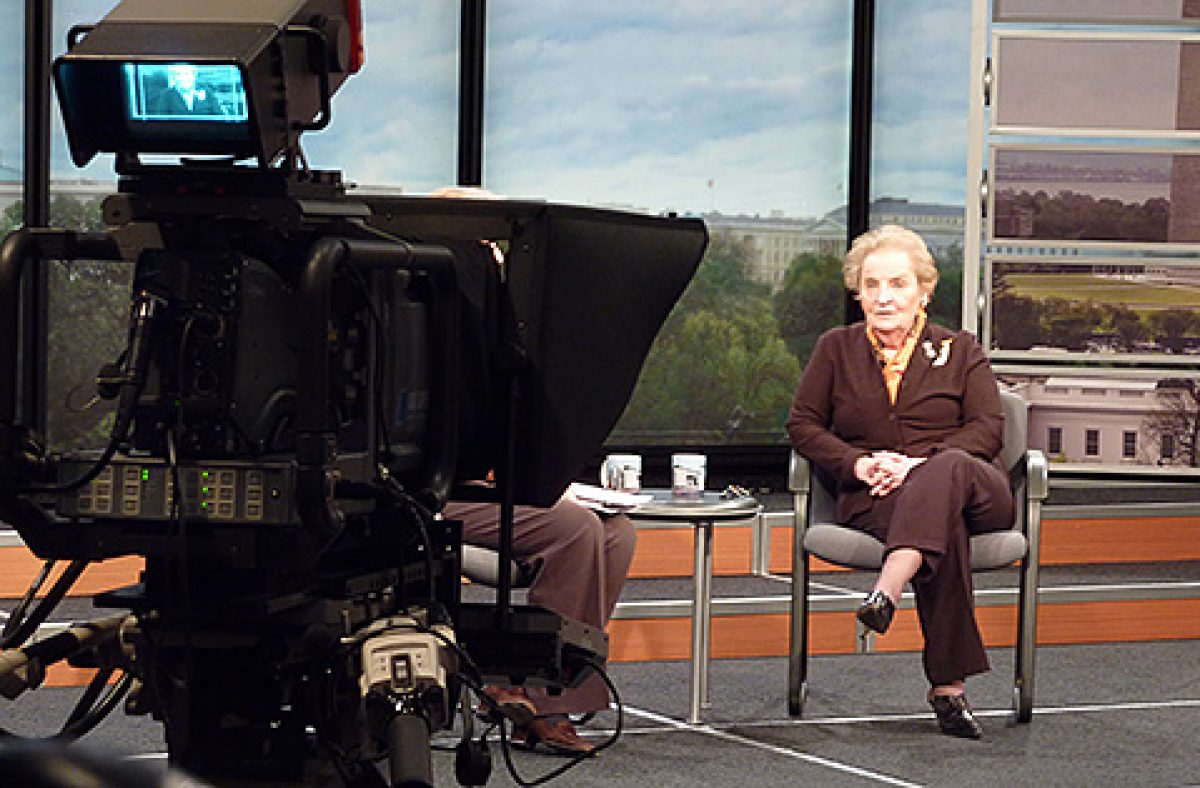 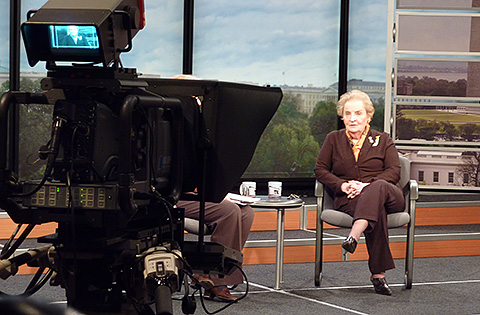 A bit much, I think, meeting J. Edgar Hoover and Madeline Albright on the same day. OK, Hoover was quite dead, the late FBI boss a statue bending over assertively, as if ready to pounce, in the the main foyer of the Newseum in Washington DC, but the former Secretary of State/UN Ambassador looked quite pink and healthy as she showed off her collection of brooches in a TV studio upstairs.

The Newseum is a monument to journalism, the so-called “fourth-estate,” which in its finest form has kept kings, presidents, politicians, scammers and mobs in check and at its worst pumped up wars, spread tyranny, “live shots” of car chases and celebity DUIs.

The Newseum is an impressive display with its 7 stories 14 galleries and 15 theaters. If you look past the subtle pandering to the big media companies that sponsor it, it can amount to Journalism 101 to anyone who spends a day here. I spent only a half-day and couldn’t get through it all, especially after seeing a sign when I entered saying that Ms Albright would be interviewed in one of the the Newseum’s two TV studios upstairs. I rushed up and claimed one of the last seats to hear her spend an hour answering questions and talk about her book “Read My Pins,” how she signaled her attitude toward the diplomats she parried with with symbolic brooches. After Saddam Hussein called her a serpent, she donned a snake pin when dealing with the Iraqis. After the Russians were caught bugging the State Department, she wore a giant insect when negotiating with them. She made her point. The Newseum has become a venue for book signings and events, almost a center of power, with news programs and White House events broadcast from here.

One gallery has a collection of 40,000 historic newspapers from the 1400s to the present, including a front page headlining the killing of Blackbeard the Pirate in 1718. At its theaters, including one with a 100 ft video wall, Edward R. Murrow takes you back to WWII while modern journalists discuss their trade and ethics. There is even a film on how reporters were depicted the movies, and a dodgy bunch of lowlifes they were.

NBC sponsors an interactive news studio where you (all kids when I was there) can try your hand at TV news reporting with a fake Capitol Rotunda inserted electronically behind you. But that is so last century. Representations of modern news gathering, demonstrations of social networking, user created content and the other dynamics that are shaping and shaking the news industry are a bit weak. Maybe because news organizations haven’t figured them out yet themselves.

I did like the Ethics Center, with an interactive game that puts you in the role of a reporter and tests your response to ethical dilemmas, such as using anonymous sources. And the most powerful place at the Newseum is the Pulitzer Prize Photographs Gallery, featuring what the Newseum says is the most comprehensive collection of Pulitzer-winning photographs ever assembled along with interviews with some of the photographers. A walk through the gallery is a heart-rending journey through history: seeing a child passed through the barbed wire at Kosovo or the iconic frame of a Viet Cong prisoner being executed in Saigon as American troops leave the country.

Alas I didn’t get a chance to pay my respects to J. Edgar Hoover. By the time I returned to the first floor the Newseum was closing and I missed the “G-Men and Journalists: Top News Stories of the FBI’s First Century” exhibit. I missed John Dillinger’s death mask, which J. Edgar hung outside of his office, but I did wink at the old lawman as I left the museum. If he were alive, he would have probably arrested me for that…or asked me to tea.

The Newseum has some interesting features online at www.newseum.com