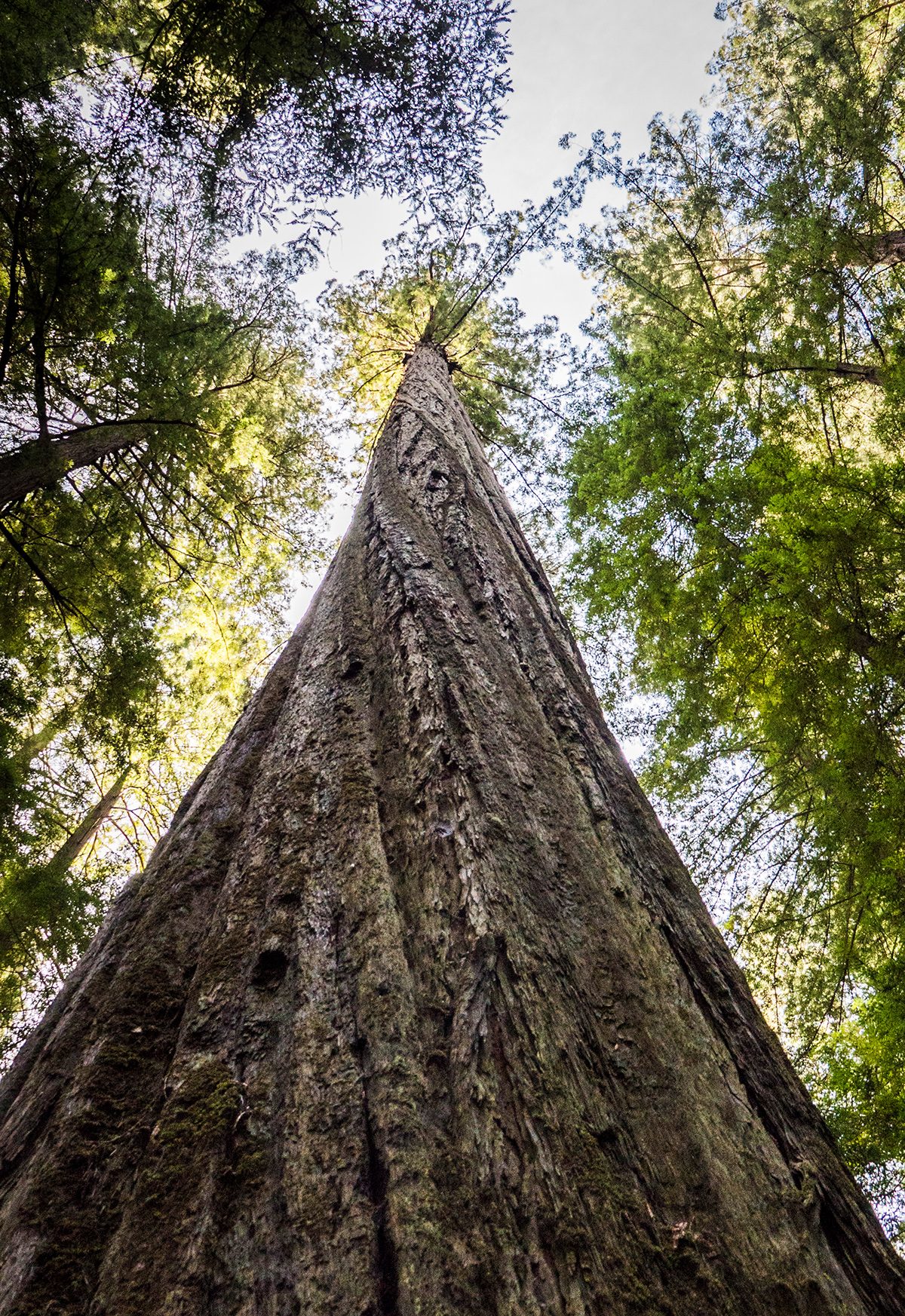 Paul Bunyan has an axe to grind. He and his ilk don’t rule the far north of California anymore. Like comedian Rodney Dangerfield, this American folk hero “don’t get no respect.” Tearing down a swath of timber in a mighty swing is ecologically unsound and politically incorrect. A giant blue ox ploughing through the wilderness certainly has to be folklore’s answer to clear cutting.

When I was a child, my father took to me to Paul’s “sitting down” version in Brainerd, Minnesota. You betcha, it is the same Brainerd that is the setting for the movie “Fargo.” This Bunyan, a Burt Reynolds look-alike, sat schoolboy straight in a north woods diorama of pine trees and happy squirrels. My dad gave some change to a geeky ticket taker who walked behind the statue, positioned himself in a booth (I could see his face through a window), lowered his voice and bellerd “Fie, Fi, Fo, Fum. What’s your name son?”

Forty some years later I stand in the parking lot of Trees of Mystery, a roadside attraction near the tiny town of Klamath, in California’s far north woods, as two German tourists double over in laughter photographing each other, gazing upward and oxward, at the underside of a gigantic, anatomically-correct Babe.

At least this Babe didn’t suffer the fate of the one of his cousins in Ossineke, Mississippi whose enormous pinecones were shot off by a drunk. Locals say the weapon was used to murder a man the next week.

Trees of Mystery, with Paul, Babe and its private forest full of talking and amplified musical redwoods, is just one of this region’s throwbacks to a time — before we all became twitchy — when drive-through-trees, burl wood carved bears and Sasquatch footprints were exciting stuff. There are a few of those hollowed out trees left, some dying, and the logging industry is staggering after battles with environmentalists over clear cutting. An activist named Julia Butterfly Hill lived in a 187 foot redwood tree she called Luna for 738 days, preventing a logging company from cutting it down. A team of supporters hoisted food to her with ropes. She descended in 1999 after the company agreed to preserve Luna and other trees around it. Hill made halting the destruction of these ancient redwoods a cause celebre. In 18th century India, the original tree hugger, Amrita Devi, put her arms around a tree to save it from the axe. She and 350 others were killed by loggers.

Despite the damage, there are still vast forests here. How vast? While Redwood National Park has a mere 110 thousand acres, the Six Rivers National Forest covers nearly 1.1 million acres and includes some 1500 miles of waterway. Ewoks live here for sure (their famous Star Wars chase scene was filmed near the Smith River) and odds have it that Sasquatch, Hobbits and some other yet to be discovered species are camped out there as well. This is prime territory for hikers, photographers, bikers, birdwatchers, rafters and kayakers.

Elk strut through these fields and forests with regal smugness.

Fern Canyon is south of Klamath in the Prairie Creek Redwoods State Park. I enter the canyon from a beach and walk along an ancient creek bed through a Jurassic Park canyon lined with ferns (yes, parts of that movie were filmed here). You really want to take your time moving through the canyon in a slow amble: listening to the brook burble, breathing the earthy air and slowly scanning the canyon walls.

At Stout Grove the quiet is earsplitting. It is a forest of giant redwoods in the  Jedediah Smith Redwoods State Park. I wind my way down a path to the floor of a valley to a grove of truly giant trees. The air is thick and musty. A twig breaks under my feet. It is so quiet that it sounds like a gunshot. It would take a half dozen people to hug one of these trees. Stout’s grandest redwood, while not the largest in the forest, is 340 feet high and some 22 feet across. Some of the trees here are as much as 2000 years old. If we were to pay this tree the US Federal minimum wage of $7.25/hour, its actuarial value would be more than $127 million dollars, certainly an economic argument for not chopping it down. I have been there twice. My silence is interrupted by two kids who start to scream.

“I want to go to Trees of Mystery,” they yell, their shouts echo through the canyon.

After lots of shushing, Mom finally gives in and leaves me and some other weary seekers of Zen in eerie silence.

The biggest tree distinctions go to the nearby Titan Tree, 24 feet in diameter, and the world’s tallest tree, Hyperion, which tops out at 379.3 ft. The locations of both are kept secret, for good reason. Some of the convenient giants have been carved with the inscriptions of lovers and vandals.

“I know where it is,” says a friend who has lived here for several decades. “It is hiding in plain sight.”

She draws us a map on a napkin.

My wife and I drive to a well touristed site and take a side trail. We look for a large tree with a growth off to one side.

After a short walk, we find it.

“Meh. Is that all there is?” I start humming the old Peggy Lee ballad.

Is it really 373.9 feet up there? Is this Hyperion? The specimen is not nearly as fat as some of the others. And, it may not be too much taller, perhaps only a matter of inches. I step off the trail and back as far away from it as I can to try to get a better angle. I hear a rustling on the trail. It is a single hiker, who waltzes by. We try to look ho-hum, not too excited.

Honestly, I don’t know if our friend is pulling our leg, someone was pulling her leg or if her information is accurate and this was really he big one. As trees go, this one is only mid-level awesome.

The people of California’s far north are caught in the same economic dilemma as the people in many countries. Their land is rich in exhaustible natural wonders in a world economy that puts a premium on adding value with finished goods, a world that is dependent on consumption and growth and where power lies in the big cities. Wild places often don’t fit the mold. From the air you can see bands of redwoods near the highway camouflaging clear cut forests behind.

It is encouraging to see that the natural heritage of California’s North and a few other parts of the world are now less endangered than they were in the past, that many of trees left will be farmed sensibly and that every last one will not become a deck or a fence post.